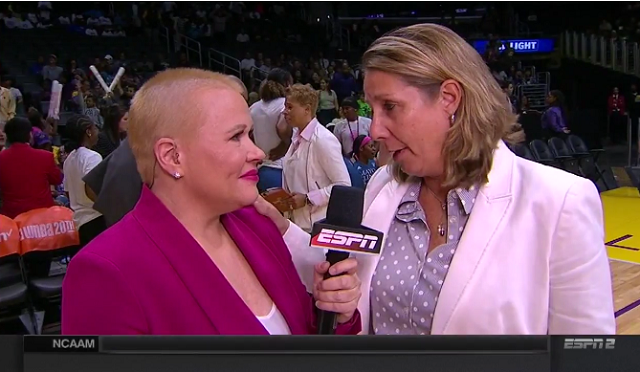 The Minnesota Lynx were taking on the Los Angeles Sparks on the west coast Tuesday evening on ESPN2, and the Worldwide Leader’s Holly Rowe was working the sidelines.

Rowe has been battling breast cancer, and had a cancerous tumor removed back in February. She’s been with ESPN since 1998, covering the NBA, WNBA, NCAA, and more. She’s easily one of the most recognizable personalities on the sideline for the network.

During her sideline interview with Lynx coach Cheryl Reeve, Reeve answered Rowe’s question, but switched gears into telling Rowe that she is more important that the game, and her team is proud of her and the battle she has fought:

Rowe, the great sideline reporter that she is, wanted to get in another question but Reeve wasn’t having it out of respect for Rowe. It was a really great moment, and of course, it’s great to see Rowe on the sidelines again.

She’s had a great attitude towards her fight as well, as she told USA TODAY in late August:

“The doctor said to me the most important thing in fighting cancer is having a good attitude, so what can we keep you doing that will make you happy? When I said it’s work, he looked at my mom and my sister like, ‘Oh, that’s a weird answer.’ But for me, that’s what makes me happy. I love my job so much and they planned around my schedule. It’s been a total team effort.”

Rowe is still fighting, and has treatment once every three weeks, but she will continue to work. Her work ethic and attitude is undoubtedly something we all could take note on.

Harry Lyles Jr. is an Atlanta-based writer, and a Georgia State University graduate.