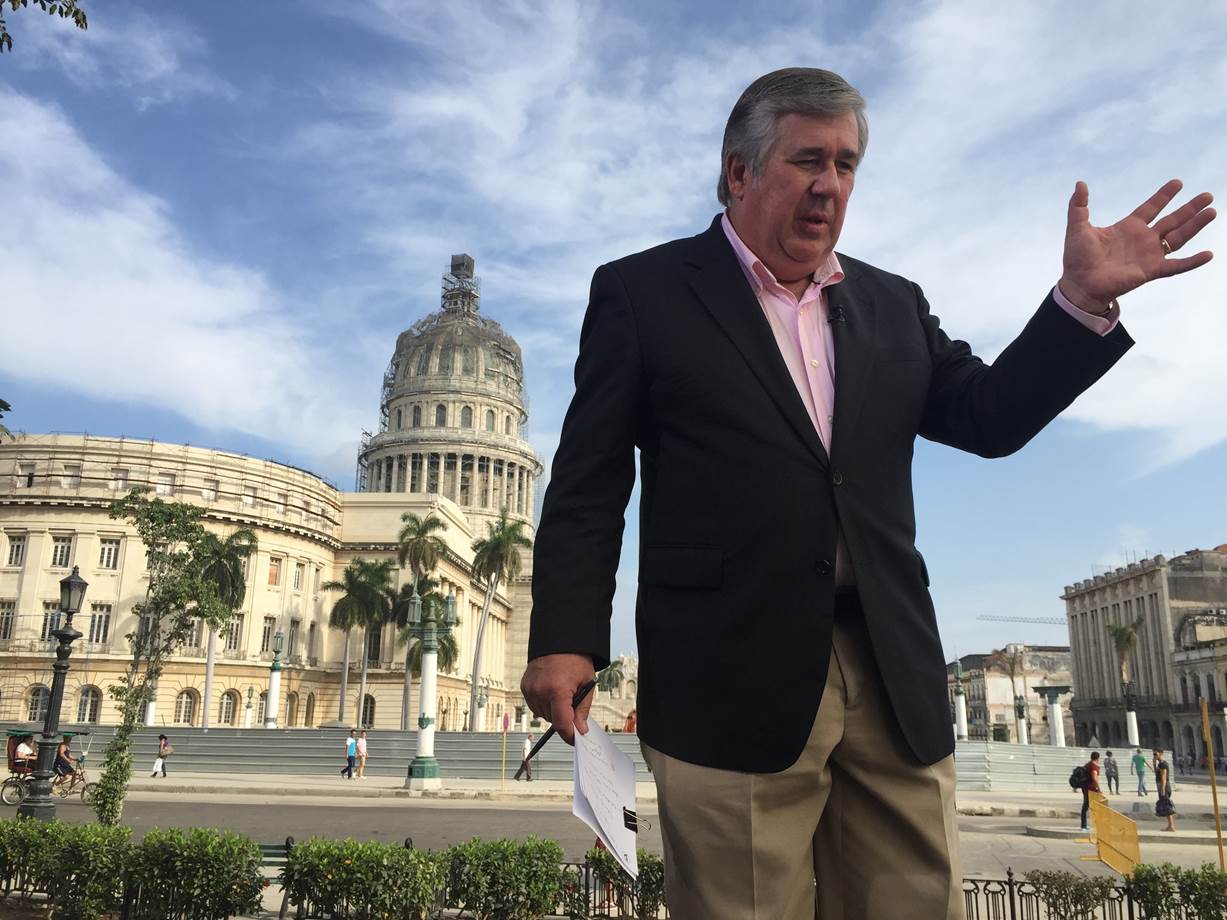 In his almost four decades with ESPN, Outside the Lines anchor Bob Ley has lived out the classic mantra from ABC’s Wide World of Sports – “spanning the globe to bring you the constant variety of sport.”  Ley has been called the “Walter Cronkite of sports journalism” by ESPN President John Skipper and has covered World Cups on almost every continent, been to Vietnam to report on the sneaker industry, and traveled almost everywhere in between to report on the most significant and meaningful stories in sports.

Last week, Ley’s reporting with Outside the Lines took him to a new destination – Havana, Cuba.  The historic game between the Tampa Bay Rays and the Cuban National Team, combined with the visit of President Barack Obama, presented a seminal moment where sports and society came together.  And that is fertile ground that Ley and OTL have been exploring for over 25 years.  In an Awful Announcing exclusive, Ley shared reflections of his time in Cuba, as well as candid images and captions from behind the scenes of ESPN’s coverage of the game and President Obama’s visit.

“I had never been there,” Ley told Awful Announcing this week.  “I had been to Vietnam 20 years ago and to Russia four years after the Soviet Union dissolved.  I had an example in Vietnam what it was like to work as a journalist in a Communist country.  The Cuba trip was absolutely fascinating.  Our challenge aside from the game was to mix the story of Major League Baseball returning to Cuba with a proper picture of what that country is about now, what the relationship is between the United States and Cuba, and all the overlaying political considerations given the fact the President was going to be there.  It was quite the challenge.”

ESPN’s live broadcast from Cuba presented some logistical challenges that the network had hardly ever faced before.

“The amount of logistical work to pull that game of the broadcast alone together was insane,” Ley said.  “My understanding was that we had a high-def production truck taken by barge from Miaimi to Havana.  I think that was the route it took, Lord knows how much red tape was involved in that.”

In addition to Ley being on site in Havana with Outside the Lines, ESPN aired SportsCenter live from Cuba as well.  ABC News was also on site with David Muir anchoring and the two Disney networks were stationed next to one another from the streets of the Cuban capital.  To prove this was no normal exhibition game, ESPN’s coverage at Estadio Latinoamericano featured interviews with both MLB Commissioner Rob Manfred and President Obama.

While there was a game to be played and analyzed, Ley and Outside the Lines could not ignore the political implications of President Obama’s visit.  He became the first sitting President of the United States to visit Cuba since Calvin Coolidge in 1928.  (By the way, that year Babe Ruth led the majors in home runs, Lou Gehrig in RBIs, and Rogers Hornsby in batting average.)  It’s a different world now and one that is much more closely connected, regardless of the past or present state of diplomatic relations.  The intertwining of baseball, politics, and even ESPN’s coverage of that intersection, were ever-present throughout the visit to Havana.

“I’m standing on the field last Tuesday in Havana, Estadio Latinoamericano.  The vibe on the field was incredible,” Ley recalled.  “Everybody knew this was really going to be special.  Take the politics out, there’s going to be a ballgame, two presidents were going to be there and 50,000 people.  Who walks up to me and says ‘I loved your Sunday show’ but Fidel Castro’s son Tony Castro, who is a vice president of the Cuban Baseball Federation.  Two nights earlier we had reported at a private dinner that Tony had shown Derek Jeter a picture of his son, Fidel’s grandson, wearing a Jeter jersey.  If you want to talk globalization, there’s Jeter sitting at dinner looking at a picture of Fidel Castro’s grandson wearing a Jeter jersey.  If that doesn’t say it all about how it’s all bound together I don’t know what does.”

Perhaps the most symoblic moment of ESPN and Ley’s Cuba trip, certainly the most viral, was when a protestor interrupted one of Ley’s live shots from the streets of Havana.  Pamphlets were thrown into the air as the protestor attempted to use this platform to speak out about the plight of the Cuban people.  It was an unscripted moment that couldn’t have been planned for, but one where the true realities of life in Cuba came into the foreground of ESPN’s coverage.

“We had our political demonstration, which we of course had no idea would become as viral as it did,” Ley recounted.  “We’re right on the street.  It’s a country where people are living inside the lines because of the nature of Cuban society.  This guy pops up next to me and I think it’s a drunk or a prankster and all of a sudden stuff gets thrown in the air and by people behind him.  The third time I heard “Castro” I get it, political.  We don’t know where this is heading, so I stiff arm the guy out of the way, who knows what he’s going to do.”

As the protestor came into the frame, Ley threw it back to the studio.  After a few brief moments, ESPN returned to Ley as a group of protestors, clearly including the man that had just been standing next to him, were arrested.  In incredible scenes, ESPN cameras filmed one of the protestors being forcibly shoved into the back of a police car.

Ley described in detail what happened in-between the stand-ups with the protestors.

“Immediately out of nowhere come three cop cars, there may have been more – zoom, zoom, zoom.  They don’t respond that quickly within 20-25 seconds if they hadn’t been watching us.  In fact, I later recognized one of the plain clothes cops as a guy I had shushed out of my shot about an hour earlier who had been in the park.  Clearly they were around and they were watching these guys.  These guys went into custody, some of them knew the drill and went easily.  At least one of them, and I think two, went with more resistance and were shoved in the back of the car like it would be a civil rights lawsuit if anyone treated an arrestee like that here in the states.  To see that with your own eyes in a one-party Communist state, to see free speech shut down like that, I thought was chilling and proper that the American public saw it.  I thought it was the perfect piece of punctuation to our coverage, we didn’t shy away from anything.” 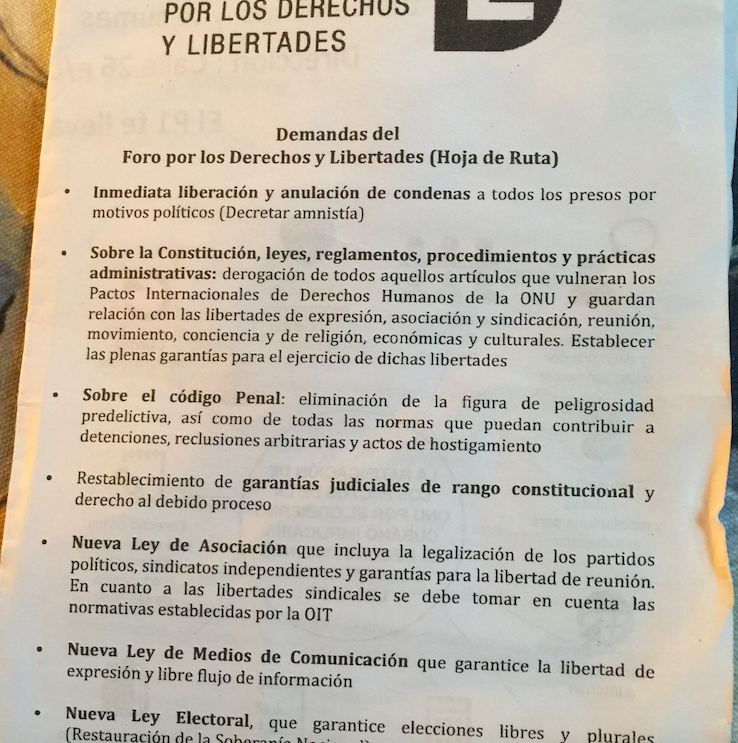 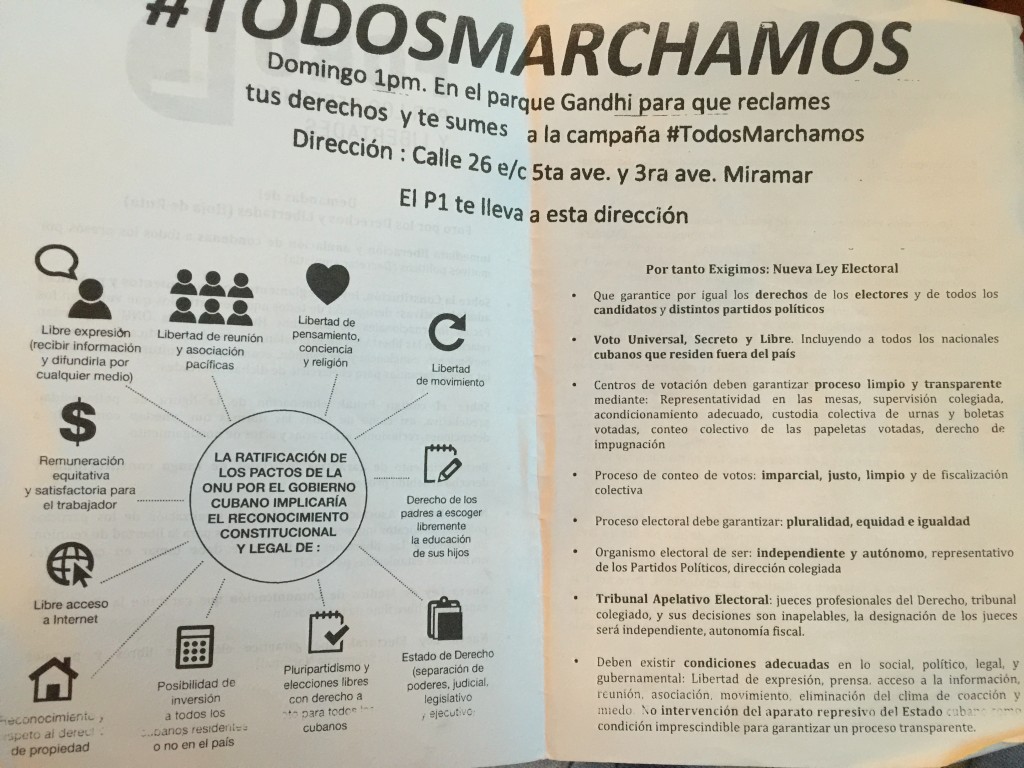 The group that produced the pamphlet, “Por Los Derechos Y Libertades,” (For the Rights and Freedoms) wrote an open letter to Barack Obama regarding his visit to Cuba pleading for a democratic transition in the country and speaking out about increasing violence and oppression against those victimized by the Cuban regime.  The group also says the following on their website:

“The foundation of another Cuba can not be built from the logic of Castroism, it must be generated from thinking and actions based in the rights of the individual and total freedom to exercise them. the presence and participation of exile in any process of transformation and reconstruction of the nation is fundamental. For the Forum, after nearly six decades of totalitarianism, freedom is urgent.”

In order to properly cover a sporting event where what transpires on the field might become secondary to the political, societal, and cultural events that surround it, there has to be a dedicated effort to go beyond what’s trending and an appetite to tell complex, difficult stories.  There has to be an openness and a willingness to go beyond sports and explore how sports is only a part of the fabric of greater society.

It’s much easier to broadcast two people arguing about sports (which ESPN also does in spades it must be said) than to do original reporting from locales abroad as it may not draw as many ratings points and it won’t be a big revenue generator.  In a sign of the times, ESPN’s main competitor Fox Sports 1 has nearly abandoned its news and reporting operation in rounds of budget cuts and intends to focus on debate and opinion moving forward.

ESPN has certainly had its financial struggles made well-known in the public eye.  Nevertheless, in sending Outside the Lines to Cuba, ESPN displayed a commitment to journalism that is encouraging in an age where there are plenty of reasons not to do so.  It’s a commitment that isn’t lost on the man that has been the face of ESPN’s journalistic efforts for decades now.

“It’s extremely expensive to do this [enterprise journalism],” Ley said.  “And our company has the same financial constraints as any company.  We’ve got to hit the number.  We have fiduciary responsibility to our shareholders.  But we’re not afraid to make a commitment when we think it’s the right dollar to spend.  I have no idea what our expedition to Cuba cost but the profile of our company did not suffer for four or five days and I think the pride within the company, to be in that team picture was like being in a World Cup team picture in South Africa or Brazil.”

“It’s expensive, but people turn to you and they expect to see content like that – not just on television, but across all our platforms including social media.  There’s plenty of opinion, God bless opinion.  I saw it with my own eyes in Havana with these great baseball debates in each other’s faces debating the way people do in soccer bars in Europe.  That’s the passion and opinion is great.  But news, enterprise, and storytelling – we have the best people and I’m so proud to work with them.”