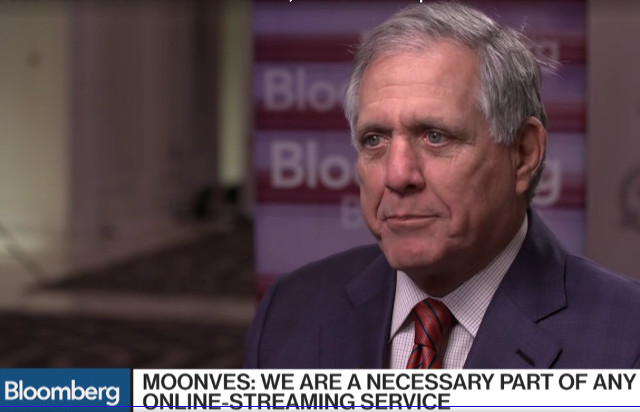 CBS CEO Les Moonves discussed a lot of topics at a conference Monday, but it’s his take on the reason for declining NFL ratings that stands out. According to The Hollywood Reporter, Moonves’ comments at the UBS 44th Annual Global Media and Communications Conference in New York included blaming three primary people for the ratings slide: Peyton Manning, Tom Brady, and Donald Trump.

Moonves also said that less-than-stellar ratings for NFL games earlier this season is the fault of Peyton Manning (retired), Tom Brady (suspended for the first four games) and Donald Trump (because too many people preferred his presidential campaign to football).

But ratings have come back, and he predicted by the end of the year the overall ratings for NFL games will be “down a couple of points … not a big deal.”

CBS All Access, the streaming channel, recently struck a deal with the NFL, and when an analyst asked how that arrangement came about, Moonves quipped: “They’re very nice to us because we give them over a billion dollars a year.”

Those comments aren’t all that far from what others have said, with many citing improved ratings since the election as a sign there’s more interest in the NFL again and many others spotlighting the retirement of Manning and Brady’s suspension as part of the lackluster early-season ratings. However, it’s certainly notable that someone as prominent as Moonves is spotlighting those specific factors, and not other much-mentioned ones like subpar matchups and play, primetime overload and anthem protests.

Of course, that wasn’t all that was discussed here, and much of the rest is relevant on the sports side too. Here’s a Bloomberg video of further comments Moonves made at the conference in a one-on-one conversation with David Westin:

That conversation starts on the subject of CBS’ recent gain of NFL digital rights for CBS All Access, with Moonves saying this has been long in the works and that it involved CBS giving up some digital exclusivity for their Sunday games.

“For a couple of years, we’ve been working on a deal, and the NFL was trying to decide what their digital strategy is,” he said. “We needed it on All Access to make it complete, and the NFL needed some of our digital rights as well.  Roger Goodell was very active, he and I dealt personally on this a lot of times, and now [All Access] is a complete service and they also have the rights to put our NFL games on other digital services.”

The discussion then moves on to the targets for CBS All Access (four million subscribers by 2020), the network’s  absence from DirecTV Now, the “active discussions” about getting them on that platform and their willingness to work with all kinds of distributors and OTT providers, mentions how CBS isn’t particularly looking to acquire anyone or be acquired (and isn’t ready to comment on the proposed AT&T – Time Warner deal yet), goes into a discussion of the news media and Trump (“a president who goes directly to consumers”), and then ends with comments on the glut of scripted content out there and what that does to prices.

The video overall is an interesting look at a lot of what’s going on with CBS. However, it’s the comments on NFL ratings and the effect of Manning, Brady and Trump (comments that aren’t in that video) that perhaps stand out the most. Moonves isn’t the first to cite those three as possible factors, but he’s one of the most influential people to do so. That doesn’t mean he’s right, but it’s certainly notable that he’s highlighting these particular factors and not other ones.