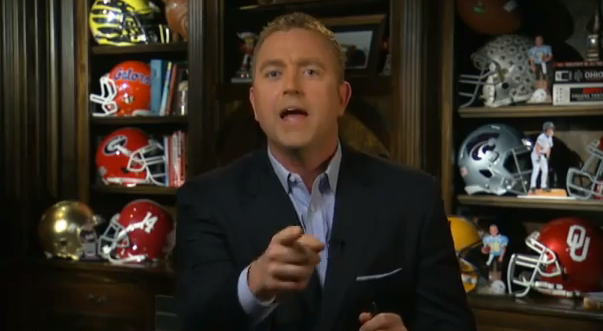 Whenever ESPN sends its top college football personalities to a campus, the school tends to go all out in making their stay a most hospitable one. Kirk Herbstreit says his most recent trip to Baylor was met with quite the chilly reception from the Bears’ coaches and staff.

Baylor fired Art Briles as head coach on Thursday, amid a flurry of dramatic moves from the board of regents following the reveal of an alarming external review of Baylor’s response to Title IX violations and other compliance concerns, with a heavy focus on the football program.

As is typically the case when college football news breaks, Herbstreit was called on to offer his take on the big news of the day during SportsCenter. At one point, Herbstreit said he had never been more disrespected than when he visited Baylor last year.

For those asking, here's SC clip of @KirkHerbstreit talking about being disrespected at Baylor for prior comments. pic.twitter.com/VUxMB4pAli

“I walked in last year to a practice and the strength coach called me out, in front of everybody. ‘Who let this guy in here?’ All the players were hooting and hollering because I had said the year before that TCU was a better team than Baylor, and so they fed off of that energy from their strength coach and I’ve never been more disrespected in my entire career than I have been at Baylor.”

Herbstreit’s comments about TCU and Baylor went back to the 2014 season, when TCU lost to Baylor but each ended the season as co-champions of the Big 12 and were passed over for a spot in the inaugural College Football Playoff (Herbstreit’s alma mater, Ohio State, ended up grabbing the fourth seed). Naturally, when he steps foot on Baylor’s campus for the first time since making that argument, Herbstreit should have expected a little bit of poking from the Bears. And because we were not there to grab a full sense of the situation, it is impossible to verify if the razzing from Baylor’s coach and players was truly mean-spirited or just in good fun.

Herbstreit does have a knack for combating people being critical of him and is quick to reply to those coming after him on Twitter. In this case, it’s Herbstreit’s word against the word of, well, nobody.

Herbstreit’s tale also follows a similar track record that seems to play out any time a coach in any sport or league is canned. That trend is the release of negative stories under a recently-dismissed head coach’s tenure from the media that covered the coach. This tends to happen more from local beat reporters once a local coach gets the can, but national media members do it as well from time to time. There is nothing technically wrong with it, but this appears to be the first time Herbstreit has shared this story. Why do so now and not call out Baylor and Briles when this first happened?

Members of the media are often put in a bind with stuff like this. In order to access information from sources, they need to keep good relations in tact. Going public with any negative information can jeopardize that standing. Herbstreit’s story helps to play into the narrative that the coach didn’t have proper control over the program, but one wonders how some of those same players still at Baylor might react the next time he’s on campus.