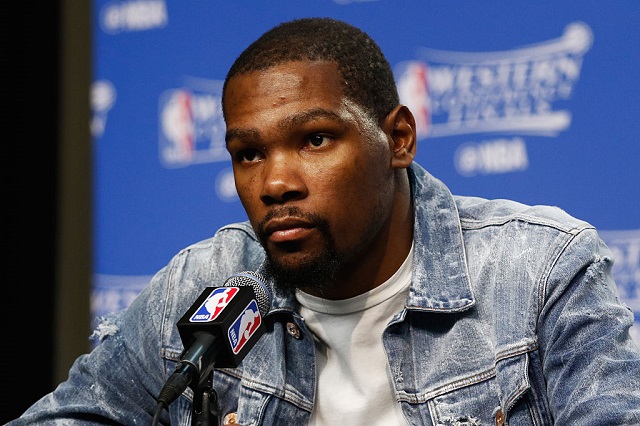 Some athletes will claim that they don’t pay attention to what the media writes or says about them. Kevin Durant is not one of those athletes. He is definitely aware of what pundits are saying about him on television, what columnists are writing or tweeting. That might apply especially to Skip Bayless.

The former ESPN First Take commentator, soon to debut on Fox Sports 1, has irritated Durant so much with his criticisms that the NBA star once asked the media to give him an opportunity to squawk back at Bayless in postgame interviews. ESPN’s Royce Young shared the story on Twitter.

One thing I should've included in my piece yesterday: KD reads EVERYTHING. He pays attention to media narratives. Talking heads bug him.

After one playoff game, Durant was at his locker reading tweets (as he would after most games). One from Skip Bayless really irked him.

It bugged him so much he sent a text to a reporter asking to be asked a question about Bayless at the podium so he could tee off about it.

We’re not certain what Bayless tweeted that so incensed Durant. The choices could very well be many. One guess is that this is the statement which ticked Durant off.

Not sure the Thunder can win a single game against the Warriors.

As we know, the Oklahoma City Thunder were on the verge of eliminating the Golden State Warriors in the Western Conference Finals, taking a 3-1 series lead before the defending NBA champs rallied for three consecutive victories to win the series in seven games.

Our own Andrew Bucholtz reached out to Young via Twitter to ask after which playoff game this occurred, and whether or not Durant was given the question that he wanted that reporter to ask.

@AndrewBucholtz Can't remember the specific game. And he was not.

Durant does seem acutely aware of how he’s perceived in the media — and likely by fans, as well — and the possibility of major backlash upon him leaving the Thunder for the Warriors via free agency was apparently a significant factor in his decision.

USA Today‘s Sam Amick shared this anecdote in a story about how the Warriors successfully pursued Durant.

“First hour: Management and coaching staff took center stage, with Durant quietly listening for most of the time while general manager Bob Myers, coach Steve Kerr and Lacob painted a picture of what Durant could expect and how they’d try to take over the NBA in years to come. The Warriors were struck by one thing early: Durant, quite clearly, was concerned with the PR hit he would likely take by leaving the Thunder behind to join the team that had beaten him in the Western Conference Finals. He didn’t want to be seen as a villain, and wanted to know how they saw that sensitive part of this whole picture.”

Hopefully, Durant’s friends, associates and family have told him to avoid the internet over the past few days, which has been overflowing with barking about him signing with the Warriors. Criticism from former NBA stars-turned-analysts like Charles Barkley and Reggie Miller accuse Durant of taking an easy route to a championship could be particularly stinging, even if they’re short-sighted. NBA players are different now. They don’t view teaming up with fellow stars on a super-team the same way that players of past NBA eras may have.

One person who didn’t quite join the pile on Durant, at least not yet, is Bayless. This is what he tweeted after Durant’s decision to sign with Golden State was announced.

Just to be clear: Michael Jordan NEVER would have left Bulls to join forces w/ other superstars. But LeBron and Durant are not MJ.

Maybe Bayless is saving his venom for Durant’s decision to join Steph Curry, Klay Thompson and Draymond Green in Oakland for when his new FS1 show debuts. But it’s probably safe to say the newest Warriors star won’t be appearing on the show for an interview.