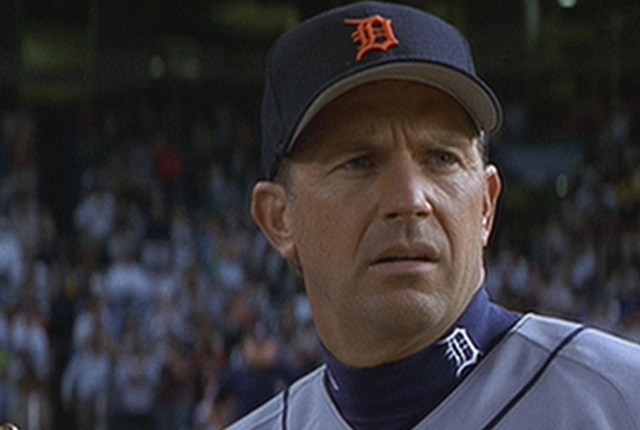 Kevin Costner and sports movies are like peanut butter and chocolate. Two great tastes that taste great together. In each of the past two years, he’s starred in Draft Day (2014) and McFarland, USA (2015), so even he seems to acknowledge a winning combination.

But Kevin Costner and baseball movies? Well, now you’re talking about something like peanut butter cup ice cream, taking something that already works and pushing it to another level. Bull Durham and Field of Dreams are sports movie Hall of Famers, bestowing Costner with a lifetime of goodwill among fans. Especially baseball fans.

Yet cinematically speaking, Costner hasn’t been near the diamond since 1999’s For Love of the Game. While that movie provided some interesting glimpses into the life of a professional ballplayer, it’s a lot more sappy than what most sports movies fans likely care to watch. (As a Detroit Tigers fan, however, I always smile at the sight of Costner, John C. Reilly and J.K. Simmons in Tigers uniforms. I’ll sit through the goopy romance stuff.)

Apparently, Costner is feeling the itch to get back in the baseball movie game. While asked about baseball during an interview with Larry King (during which King essentially played the role of Chris Farley – Field of Dreams… that was awesome!), the actor said “I got one more in me.” Pressed by King, Costner said “it has to do with the Cubs” before admitting that he’s “gotta get it ready.” Presumably, he means from a producing standpoint.

Here’s a video clip of the exchange:

My favorite part is Gary Oldman saying he liked Costner’s golf movie (Tin Cup). The poor guy. Ask him about playing Dracula, Larry! He was the king of the vampires. (Oldman did share that he turned down Edward Scissorhands, however.) Any of that would probably have been better than talking about the movie Costner and Oldman were promoting. Criminal is getting critically pummeled, drawing a 25 percent rating on Rotten Tomatoes.

So Costner wants to make a movie about the Chicago Cubs. And he sounded kind of excited about mentioning it to King, almost like he shouldn’t have but couldn’t resist. The question, of course, is what he needs to get ready.

Would this be a movie with Costner somehow involved with the Cubs? A baseball version of Draft Day? If we see Costner hanging around Cubs president Theo Epstein or general manager Jed Hoyer, that would probably be a tip. Maybe Costner is intrigued enough by Joe Maddon — and who isn’t intrigued by Joe Maddon? — to want to play a version of him on screen? Let’s hope not. Costner typically plays more uptight characters than the counter-culture Maddon. Maybe this would be about the Cubs fan experience. Costner as a Wrigleyville bar owner! Or a rooftop owner whose business near Wrigley Field has been ruined by those video boards and signs. But those probably aren’t the kinds of Cubs-related stories that appear to have Costner excited.

Whatever he has in mind, would the story be affected by the Cubs fulfilling their World Series expectations this season? Maybe that’s what he’s waiting for, what he needs to get ready. Let’s put a little more pressure on the Cubs. Everyone’s pointing at them to win the World Series. What if a Kevin Costner baseball movie depends on it too?