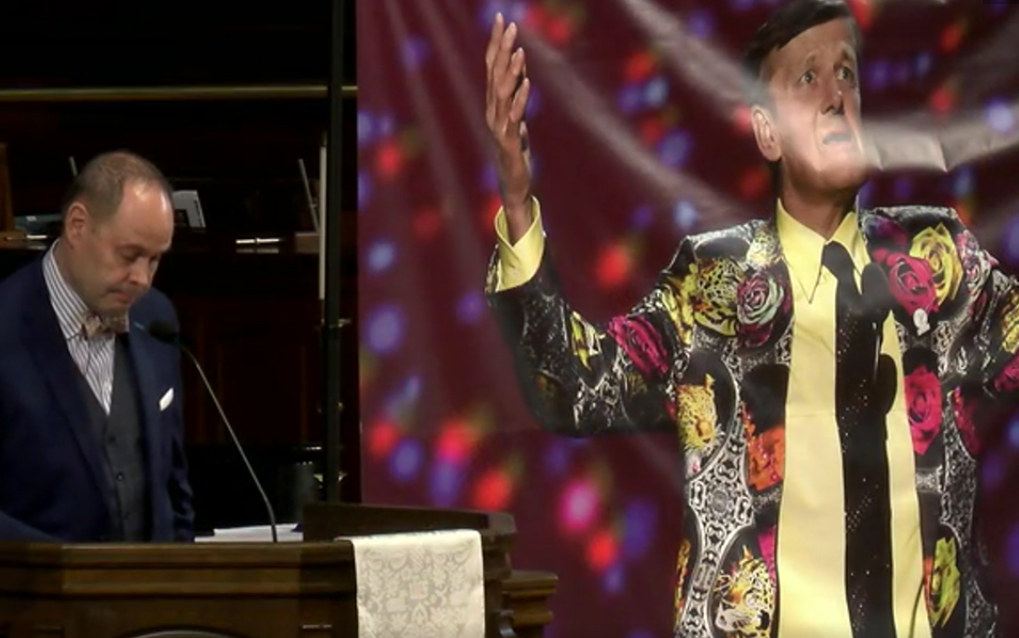 Many of the remembrances of legendary Turner Sports broadcaster Craig Sager have been quite sad, and that’s understandable. Sager’s passing at 65 last week after years battling with acute myeloid leukemia hit the sports world hard, affecting everyone from viewers to media to players and coaches. However, as AA’s Matt Yoder noted last week, Sager’s legacy wasn’t just on the serious side, but also in “bringing fun back to sports.” He was known for his sense of humor on the job and off, and it’s appropriate that that was recognized at his funeral Thursday as well. There were plenty of touches on that front, from senior pastor Randy Mickler wearing a loud Sager-inspired outfit to Sager’s daughter Kacy delivering a perfect moment of irreverence. Here was the leadup to that:

I've decided I'm not going to alter the way I talk about my father at his celebration service just because I'm standing in a church.

And boy, did she come through:

Hahaha, it totally landed, if you guys were wondering. https://t.co/n4Ithkq1u0

@THESagerbomb and @CraigSagerJr have the room in stitches. This is what their dad would have wanted.

Sager’s Turner colleague Ernie Johnson also managed to combine light and heavy moments in his eulogy, particularly in a poem he wrote (the backstory to the poem starts around 2:30, with the poem itself starting at 3:27):


And so here we gather on this December morning
Five days having passed since word came with no warning
Our buddy, our brother, our friend for so long
Had left us to ponder this thing, #SagerStrong

He stood out as a newborn, his blanket magenta
With hints of turquoise, lavender, and a touch of burnt sienna
Some babies had rattles and toys of their own
Craig had a loud suit, and a new microphone

He went to Northwestern, there honing his skills
Where Wildcat football had few wins or thrills
Those fall days in Evanston can be rather chilly
When you’re dressed as the mascot, freezing your Willie

He got his big break working in Sarasota
Let me share with you this very true anecdote…uh
The date, April 8, back in ’74
Hank Aaron knocking on the great Babe Ruth’s door

Craig made the trip north to watch 715
And he did something that none of us had ever seen
When Aaron connected on Al Downing’s pitch
Craig ran on the field, that son of a…gun

The crowd’s going nuts as Hank circles the bases
And there at home plate, amidst all of those faces
Is a guy in a trench coat that’s not made to order
You know that’s Sags, with his Radio Shack tape recorder

They knew then and there, with that move that took guts
That great things awaited, no ifs, ands or buts
He took his talents to KC and then moved again
When stardom took hold as he hit CNN

But don’t think for a moment it was just about style
If that was your thinking, you’re off by a mile
He prepped for each game with meticulous flair
A pro’s pro does that when he goes on the air

They loved his work ethic, but at day’s end
They viewed Craig as a colleague, and above all, a friend
He’d ask the tough question when it had to be done
And somehow the subject would say “Well, that was fun”

Now working with Craig, here’s one thing you should know
Did the man ever sleep? I do not believe so
He’d go running each day, and do research at night
I’m told he once went to Hooters and had a Bud Light

The golf course always was for Craig a favorite destination
He took $10 million dollars off his friends, by estimation
He won the Karma Classic, every year, was undefeated
And afterwards, in disbelief, would say “You think I cheated?”

I really truly do believe no man enjoyed life more
That laugh, that smile, that joy we saw when he walked in the door
And how he worshipped Stacy, how he loved the sound of “Dad”
How he knew his job was one that everybody wished they had

That vibrant, thankful part of Craig was never hidden
Even when illness laid him low, and I’m not kidding
You’d visit him and hope to cheer him up or lift his spirit
He’d express his hopeful outlook and make you glad that you could hear it

There were countless chemo hours, many a sleepless night
That marked this unreal ending to his awe-inspiring cancer fight
Then there was the profound impact that Craig Jr. had
Not once but twice, this faithful son gave life to his dad

And honestly, we weren’t surprised that Craig returned to work
For all of us to see him on the sidelines was a perk
To see him interviewing Pop, Rick Carlisle or Doc
Sags was back, and using every second of the clock

And how that must have felt to hear the roars of fans leaguewide
Who cheered his courage and took selfies standing by his side
I watched him work a playoff game, fly home and right away
Have chemo, board a flight and hit the sidelines the next day

In each NBA city, there were t-shirts, there were signs
As admiration freely flowed, arenas became shrines
It truly was miraculous, his will, his fight, his grit
It’s as if he said “You’re cancer, huh? Well, I don’t give a…darn.”

The man that we reflect upon this day was just a treasure
The number of folks that he inspired, there’s just no way to measure
At the ESPYs when they got that honor named for Jimmy V
In a room of marquee players, Craig’s the guy they came to see

He delivered the most eloquent and heartfelt speech that night
He displayed that in our darkest times, one man can be a light
The line we’ll all remember cut through sorrow like a knife
“Time,” Craig said with passion, “is simply how you live your life.”

And so amid the tears and all the memories we cherish now
We say farewell to our friend Sags and make this humble vow
There’s no way to gage the days we have, no way to know how long
But know this, Craig; we’ll do our best to live them #SagerStrong.

Those are great tributes, and they illustrate both Sager’s funny side and his serious side. That’s an excellent way to remember him.