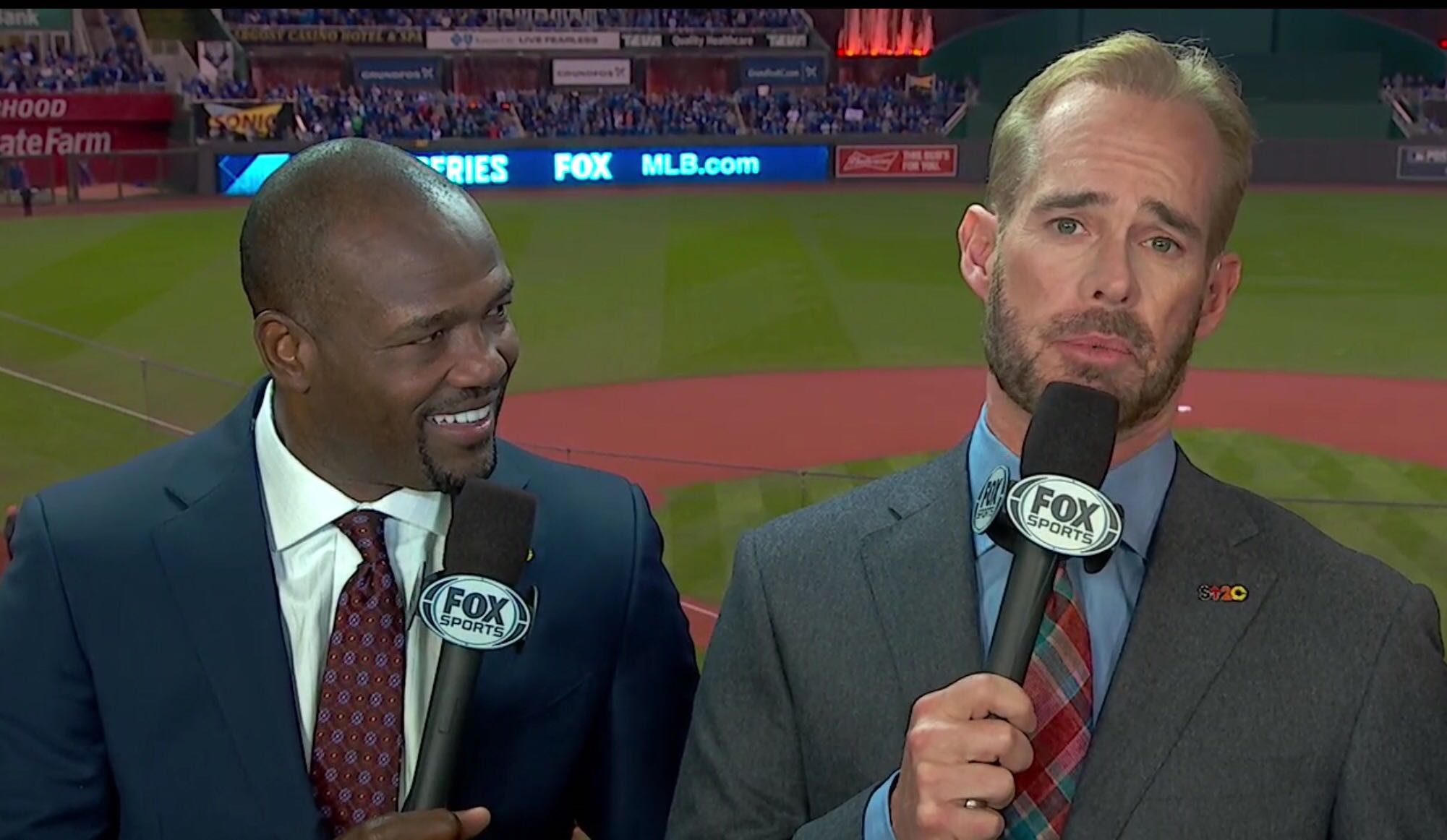 Joe Buck’s attempt to reinvent himself with a beard, tattoos, and interviews showing his affinity for the f-word in a concerted effort to show the “real” Joe Buck reminds me of the unpopular kid at your high school who gives himself a post-graduation makeover in an attempt to be cool in college.

If he stays the course, he’ll continue to be a human piñata on the Internet. If he continues rebranding himself 20 years after becoming FOX’s lead voice of Major League Baseball, he risks it all looking like an act.

It’s fitting that Joe Buck will call his 18th All-Star Game on Tuesday night while throwing a mid-career changeup set on convincing the public that the announcer they’ve long hated wasn’t the real Joe Buck.

In a thankless job where getting bashed on the Internet has become sport — just check Chris Berman’s Twitter mentions last night during the Home Run Derby — there might not be a broadcaster despised by the public on a more personal level than Buck.

The Ringer’s Bryant Curtis aptly described Buck’s image recently as the “smug, unemotional voice of the NFL and MLB” and “scion of nepotism.”

Or as put more bluntly from a Redditor: “Dull, pompous, self-entitled, smug little schmuck whose father paved the way for his career. He’s an embarrassment to his father’s legacy and to sports announcing. I would rather listen to Billy Graham announce an NFL or MLB game than this little f*cktard.”

Hell, even Buck’s own wife refused to go out with him at first because she thought he seemed arrogant.

While Buck has vastly improved his play-by-play enthusiasm and is widely respected both on and off the air within the industry, he’s still ruthlessly pilloried whenever he calls an event — something that clearly and openly bothers him.

So in the last five years, Buck has made a clear and concerted effort to show off the “real” Joe Buck that swears like a sailor, is friends with Paul Rudd and Jon Hamm, and doesn’t take himself too seriously.

He started by showing much more enthusiasm during his calls, best exemplified by echoing his dad’s “We will see you tomorrow night!” line after David Freese’s walk-off home run in Game 6 of the World Series:

The following year, he grew a beard that he says was inspired by his new girlfriend but felt like the result of a FOX focus group.

Recently, his makeover has been magnified.

He’s added two tattoos on his biceps that say, “So What?” and “Bastante” (Spanish for “Enough”). He addressed his critics in last month’s feature by The Ringer by playfully referring to his image as, “a stiff, prudish dork that nobody would ever want to have dinner with.”

And most recently, Buck went on Barstool Sports’ “Pardon My Take” podcast that included a surreal moment when he discussed his favorite cuss word (“motherf*cker”), beer (“Stella”), and sex position (“I think I’d be unfair to the other sex positions if I only chose one”).

But there are three infamous moments that Buck seemingly can’t outlive used as Exhibit A, B and C by his detractors to forever lambast his work: the soulless calls of a Brian Mitchell kick return in 2003 and David Tyree’s helmet catch in Super Bowl XLII, plus the indignant response to Randy Moss’ faux mooning at Lambeau Field in the 2005 playoffs.

While the Mitchell and Tyree calls were clear blunders, the Moss moment exemplified how Buck can’t win with the public. If Al Michaels had said the same thing, he would have been applauded for calling out Moss’ immaturity. But because of who called the game, somehow Buck ended up receiving the brunt of the criticism simply for chastising a crass gesture.

It feels at times like the public will distort anything and everything Buck does to criticize him.

His old-school minimalist style is seen as being joyless. His perfect announcer voice comes off as rehearsed. His dry sense of humor makes him appear pompous.

And if he tries to fix his image, he only makes it worse. When he said in 2008 that he’d rather watch “The Bachelorette” than sports in an apparent attempt to come off as unpretentious, he was instead roasted for not appreciating his job.

I don’t foresee his more recent efforts to change his public image working any better.

Or as one Barstool reader commented below his “Pardon My Take” podcast: “I would like Joe Buck a lot if he wasn’t a complete c*cksucker.”

My advice to Buck: Forget the rebranding.

You’ll never be cool if you look like you’re trying to be cool, and getting tattoos and talking about how much sex he has with his wife on a podcast screams, “TRYING TOO HARD.”

Rather, to win over public perception like he’s done within the media industry, Buck should look at the booth of his competitors at NBC: Al Michaels and Cris Collinsworth.

The former is the template for how to do play-by-play with the perfect balance of minimalism and flare for the dramatic, and the latter is a blueprint on changing the public’s perception of you.

Collinsworth was once considered a smug prick just like Buck but drastically cut down on his sarcasm and instead focused on providing the best color commentary insight in the game. Buck should follow suit by cutting out the dry humor and replace it with self-deprecation. Get off Twitter, where Buck keeps getting dragged into feuds with trolls — and stay off. And be just as earnest calling the meaningless midsummer baseball game as you are for the Super Bowl or World Series.

Meanwhile, Michaels is as old-school and minimalist as they come but his passion for sports still comes through the microphone at the age of 71 and he is the master of one-liners that encapsulate epic moments without sounding rehearsed.

“Do you believe in miracles? YES!”

While Buck is more demonstrative with his calls, he still just describes the action at a higher volume instead of framing the moment with a great one-liner, like the below touchdown by Cam Newton in last year’s NFC Championship Game. Buck called it as simply, “He is… in for the touchdown!” when a pro’s pro like Michaels might have described it as such: “Superman soars into the end zone and the rout is on!”

Yes, it will take a lot longer to win over the public this way and it will be much more subtle than growing facial hair or discussing sex positions with his wife.

But the only thing people hate more than someone they deem a “dull, pompous, self-entitled, smug little schmuck” is one who desperately tells them he isn’t.