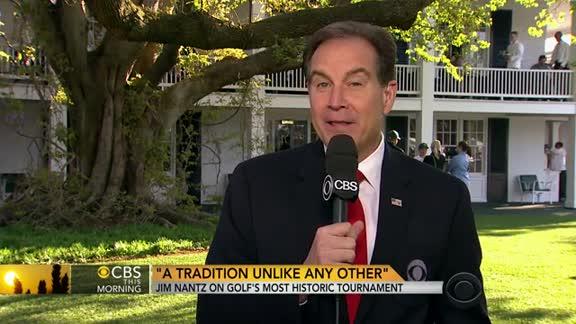 We may be hearing Jim Nantz’s regular “Hello, friends” for some time yet, as the prolific and veteran CBS broadcaster told Sports Illustrated’s Richard Deitsch he hopes to keep broadcasting through the 2036 Masters. What makes that 2036 date so special for Nantz, who’d be 76 then? Well, his first Masters was the 50th, in 1986. 2036 would mark the event’s 100th anniversary, and Nantz told Deitsch a conversation with legendary CBS and ABC broadcaster Jack Whitaker made reaching that milestone a goal for him:

“Knowing that the Masters always ends on the second Sunday in April every year, I looked it up: My 50th Masters would be April 8, 2035,” said Nantz, 56. “So I thought that would be the day I would retire.”

But Nantz said his goal changed after an after-dinner conversation with one of his mentors: the famed sports broadcaster Jack Whitaker. Whitaker informed Nantz that he had to work 51 Masters tournaments because the 2036 Masters would be the 100th playing of the event.

“So Jack Whitaker if you will gave me a new goal, redefined what I want the back end of my career to look like,” Nantz said. “I know it sounds a little crazy. Here we are in 2016 talking like this. But there are great, iconic voices working in their 70s, churning out quality work. This is all subject to be reexamined but I really want to make it to 2036 health willing and CBS willing. I’d really like to do that for Jack Whitaker.

“I would be 76 years old, but there are broadcasters working at that age and even older. I love what I do. Every show is it’s own challenge and I love it. It will be a hard thing to let go of but that is one thing I would love to be able to achieve one day.”

Nantz made those comments as part of a longer conversation with Deitsch, and one that discussed how many remarkable events he’s been involved in broadcasting. Apart from having the 50th Masters (remembered for Jack Nicklaus’ amazing win at age 46) be his first broadcast of that tournament, Nantz has also worked the 50th NCAA Final Four (in 1988) and is set to work the 50th Super Bowl for CBS in two weeks. He had some interesting things to say on that front, too, especially when Deitsch asked about the fire Nantz took for saying Al Jazeera’s story alleging shipments of HGH to Peyton Manning’s wife Ashley was “on all levels, a non-story”:

I am aware of what’s evolved off my comments on [WFAN host] Mike Francesa’s radio show. It’s taken on a life of its own and I am a little bit amused by it. I think it really has been misportrayed or overblown and I have been anxious for the chance to clarify that. I have sat back and watched this gain steam and everyone thinks, “Okay, he co-conspired with Peyton or an agent and tried to put an end to this story.” The reality is I made that comment on that Sunday morning, the third of January when they were getting ready to take on San Diego. I went on Mike’s NFL show and Mike asked if I was going to bring it today (meaning on the air, Jan. 3), That’s what he asked me. I said no. It is a non-story. Why breath life into it? Now I was answering a question about it that day. At that point the story was eight days old. It had been discussed and detailed by every NFL pregame show the previous Sunday and was referenced a little bit in the Broncos-Bengals Monday Night Game six days prior.

So in the next six days, the story disappeared. Whether it was viewed as having run through the news cycle or people felt it lacked credibility, I don’t know but it basically disappeared. So here we are six days after the story had gone away and that was my answer for Mike that day. I didn’t know it that morning but as the New York Daily News reported the next day, all the networks, CBS, FOX, NBC, NFL Network, 17 hours of coverage that day, not one mention of it. So if I had it wrong, everyone had it wrong. No one mentioned it. And Peyton was in the discussion that day of all the shows because he was returning to uniform as a backup. So it could have come across at any point but in 17 hours of coverage, not a breath.

Those are fair points from Nantz, and they perhaps show something interesting about him. In his various interviews, with Francesa, with Deitsch, with AA’s Ken Fang and others, Nantz has long proven willing to discuss his on-air decisions in a way others don’t often do. The Manning story’s particularly notable on that front; as he points out, he was far from the only one ignoring it that day, but his decision to outright say he was ignoring it drew a lot of attention. Moreover, his decision to stick to his guns with Deitsch rather than just offer an easy “I made a mistake” and hope the story goes away continues that idea.

While Nantz’s approach isn’t always going to win everyone over, and while he has plenty of critics out there, it’s perhaps impressive that he’s at least willing to say what he’s thinking and planning in a more candid way than others are. He’s shown great versatility throughout his CBS career, and has firmly established himself as their top host and play-by-play man for a variety of sports. The future’s hard to predict, and lots could change in 20 years, but the discussion of Nantz broadcasting the 2036 Masters doesn’t seem completely ridiculous. That says a fair bit about what he’s accomplished and where he’s at.