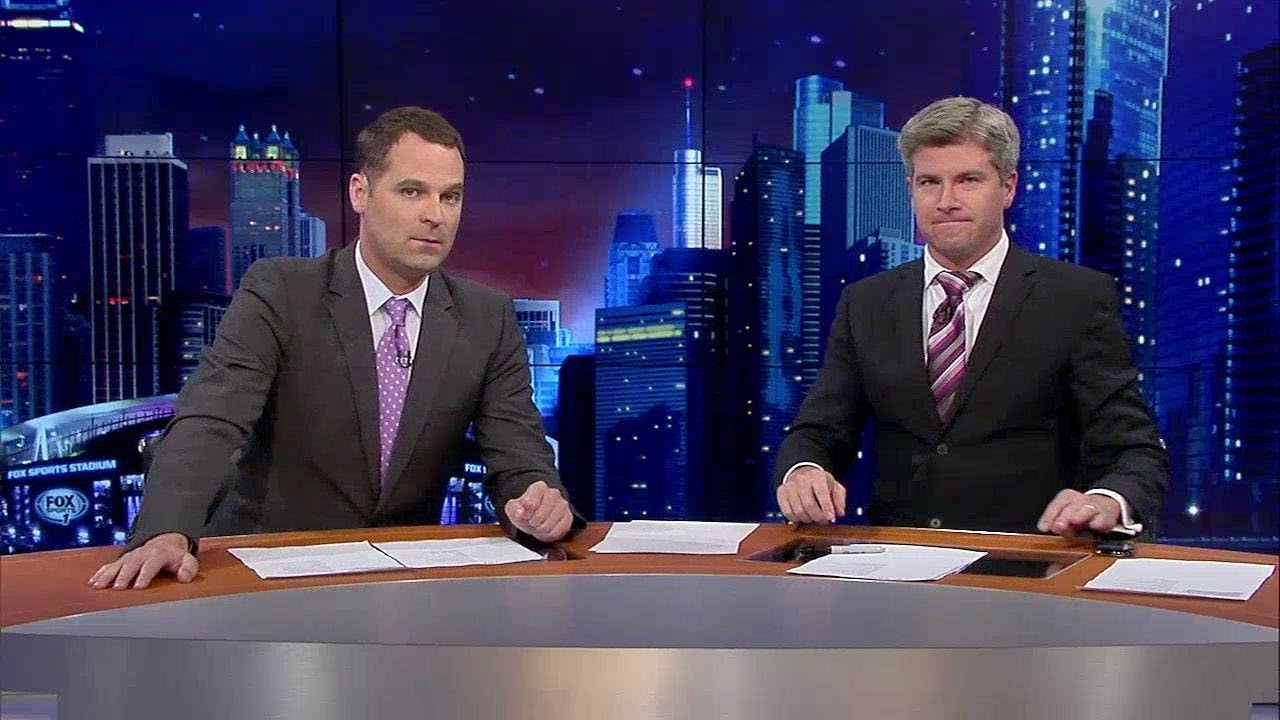 There’s been a lot of chatter about what’s next for Jay Onrait, Dan O’Toole and Fox Sports Live as a whole since the SI January report that Fox was “ending Fox Sports Live as viewers know it now,” including disputes of SI’s reporting (and specifically of poor recent ratings causing the cancellation), controversial comments from Onrait and O’Toole, and The Big Lead’s Ryan Glasspiegel writing that his site initially heard rumors of their suspension. While that suspension was denied by Fox, Onrait and O’Toole haven’t been hosting Fox Sports Live for the last two weeks, and Glasspiegel’s report they would return Feb. 22 with a new show has now been confirmed by Onrait and O’Toole themselves. They confirmed that in their 100th podcast that was posted Thursday, and that podcast also has them dropping some other tidbits about what’s coming:

In the key part here (15:30), they start by talking about how they’re finally getting recognized in some places:

Jay Onrait: “Shoutout to the good folks at Sweetgreen in Santa Monica. I went in today, and they recognized me from the show. So, once every two months we get someone recognizing us from Fox Sports Live.”

Dan O’Toole: “I also had the same experience! At my gym, it’s now on, and at the Jersey Mike’s down the street, FS1’s on. I don’t know what’s going on.”

Onrait: “On Big Fox! If you watch The Grinder, or Grandfathered, or the X-Files revival, you saw all the ads for our new…you didn’t see any of those ads. They haven’t done any ads. I think the idea is they did so many ads for our first launch, and that show wasn’t good, that they thought, ‘What if we do no ads and then if it’s good, we’ll be like ‘Yeah!’ Discover it on your own!'”

This then led into a segue about their show being promoted on other Fox shows:

O’Toole: “Speaking of The Grinder, I don’t think this is a big ask, have our show playing in their house during The Grinder.”

O’Toole “I know, but then they could flip to say ‘I like this show’!”

Muldowney: “What was the show that did that? Strangers With Better Lives?”

Onrait: “No, it took place in Brooklyn, it was created by the same guy who did New Girl, we actually filmed something for it.”

O’Toole: “We were in their TV. But I forget the name of that show.”

Muldowney: “You said it was in Brooklyn! I thought it was like Friends With Better Lives.”

Onrait: “No, that was Brooklyn Decker’s show.”

Yes, Friends With Better Lives was a short-lived CBS show from 2014 (cancelled after five episodes!). What they’re looking for here is Weird Loners, which aired a six-episode first season on Fox in the spring of 2015, and then was cancelled. To be fair to Onrait and O’Toole, though, that’s not an easy name to remember: I watched every episode of that show, and it still took me a bunch of searching to find the title. It is one of Onrait’s only IMDB credits, though, next to Corner Gas: The Movie, The Marilyn Denis Show, Fox Sports Live (where he’s listed as an actor as well as “himself”? Is Jay Onrait really a character?), and Jason Whitlock’s House Party By The Bay (how’d he get a credit for that? By famously not going to San Francisco?).

After digressions about sniffing sharpies, liquid paper, and gasoline, plus the state of the liquid paper industry, “road pops,”  wiping butts, and phone problems, they get back into talk about the new show at 22:31, and reveal that it will be half an hour and also uploaded daily as a podcast, but that their existing podcast will continue:

Onrait: “Ladies and gentlemen, we are doing our new TV show format starting Monday. For our American viewers, set the DVR, tune in, it’s going to be a great show. But here’s the good news for our Canadian viewers, and listeners, and friends, because everyone in Canada’s a friend.”

Onrait: “Yes, and related, just like Mike. We are turning that new half-hour show into a weekday podcast.”

O’Toole: “But we’re still going to do this one.”

Onrait: “We’re still going to do this one. That will be the Fox Sports Live podcast, it will be approximately 25 minutes every Tuesday morning to Saturday morning. Five days a week, you’ll get that little taste of us, if you know what I’m saying.”

O’Toole: “So it’s like you’re snacking all week, and then you’re like, ‘Here’s my entree!’ with the full podcast.”

Onrait: “Yes. This podcast will continue with me and Dan, with Mark, with Ben, with Mike, our Canadian friend, with Pat Muldowney, and of course, with Engineer Jim. That will not stop, that will still be every week, the Jay and Dan Podcast. But we encourage you on Monday to hop on iTunes and subscribe to The Fox Sports Live Podcast with Jay and Dan.”

We’ll see how this new show works out, but there’s certainly potential there. The podcast has been highly entertaining over its existence and has featured Onrait and O’Toole’s personalities, senses of humor and interviewing skills. While those qualities were shown on Fox Sports Live too, especially once they ditched the ill-conceived initial athlete panel, there wasn’t as much time for Onrait and O’Toole to shine in such a highlights- and news-focused show; the really memorable moments were from the segues, usually in the “Mid-Show On-Camera Appearance” or “Get Me That Stat.”

The shows from the prop room during Super Bowl Week illustrated what these guys can do with a funnier, less-flashy program, and if they’re able to keep that going every night, this could work out well. There does appear to be a diminishing appetite for traditional highlights shows, at both Fox and ESPN, and maybe this will prove to be a viable alternative. It’s worth noting though that it’s an enormous departure from the original version of Fox Sports Live and anything FS1 has done prior that could be classified as their version of SportsCenter. Ironically, this seems to fit best with the idea of FS1 looking to be a true “alternative” to ESPN at a time when they’re relying on more former ESPN personalities than ever before.

The key question is if viewers will come, though, and the precedent isn’t all that encouraging from a ratings standpoint. Fox has already developed one late-night show around sports humor and a strong personality, Katie Nolan’s Garbage Time, and the standard ratings for it haven’t registered significant numbers (although many of its segments do well on the web). The old ratings for Fox Sports Live, while perhaps not the only reason behind its revamping, weren’t great either. We’ll see how many tune in for the new “Fox Sports Live With Jay and Dan,” and how much time Fox gives it; the hope here would be that they recognize the need for a long-term play rather than a short-term ratings push, but many of FS1’s other decisions have been based around the latter instead of the former.

[The Jay and Dan Podcast]