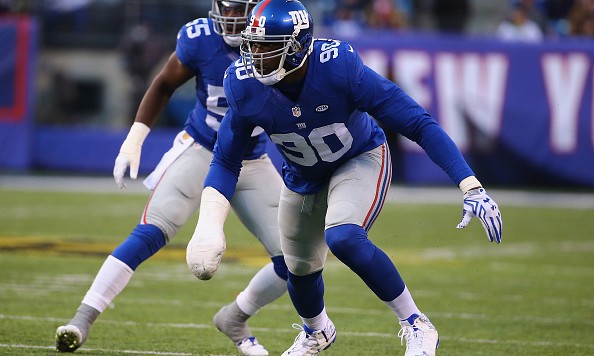 One of the biggest ongoing stories in sports media that probably deserves much more attention than it gets on a national scale is the ongoing legal battle between Giants DE Jason Pierre-Paul and ESPN’s top NFL insider Adam Schefter.

To refresh your memory on this story, it all started last summer when Schefter reported details about JPP’s injuries sustained in a fireworks accident.  Schefter reported the shocking news that Pierre-Paul had a finger amputated… but he didn’t just tweet it, he published a photo of Pierre-Paul’s medical records.

Publishing that picture has already cost two hospital employees their jobs for leaking medical records.  Pierre-Paul has also sued ESPN and Schefter for invading his privacy with publishing the records, a decision which Schefter has defended publicly.

The latest update from the case comes via the New York Post.  In the suit, Pierre-Paul is demanding to know how Schefter obtained the information (in his interview with SI, he makes it clear that the pictures came to him and he didn’t make a specific request for them).  On the flip side, ESPN is doing everything they can to throw the lawsuit out, citing their freedom of the press and first amendment rights.

The crux of the argument, at least from the invasion of privacy angle, is that Schefter did not need to go the extra step to publish the photo of the private medical records:

But Pierre-Paul insists in a filing submitted Thursday that he has a right to know “the precise circumstances under which [his medical] chart was given to Schefter.” The football star also wants to know if Schefter paid the hospital for his private medical information.

Pierre-Paul says the Florida suit shouldn’t be tossed because he’s not challenging the newsworthiness of the ESPN report about his injury, only Schefter’s decision to publish a photo of the hospital chart.

“ESPN does not explain how [Pierre-Paul’s] medical records were of legitimate public concern, as opposed to simply reporting that the injury occurred,” the player’s attorneys say in court papers.

“Nothing exempt sports reporters from the law’s protection of medical records,” Schuster and Fritz argue in court papers.

According to the Post, there will be a hearing later this month in federal court.

From this laptop keyboard, moving beyond the specific legal matters at hand (because I’m not a lawyer unlike famous sports bloggers turned television personalities), there’s always been an uneasiness surrounding Schefter’s decision to publish that picture.  Schefter has such integrity, respect, and authority as a reporter that you can bet everyone would have believed him that the surgery took place if he had simply tweeted it.  However, publishing someone’s private medical charts (even though it proves the report accurate) is just a step too far.  I’m sure any reporter, football player, or human being in general would not want to see something that is supposed to be protected and private leaked out for millions of people on Twitter to see.  In that instance, it’s hard to argue with where Pierre-Paul is coming from, even if the courts don’t ultimately rule in his favor.

This is a very important case for the future of sports media and reporting as a whole.  If Schefter and ESPN emerge triumphant, it’ll embolden reporters to continue to push the envelope when it comes to making what’s privately known public knowledge.  If Pierre-Paul wins the decision against Schefter and ESPN, it may cause insiders and reporters to throttle back their reporting if questions about “invading privacy” arise.