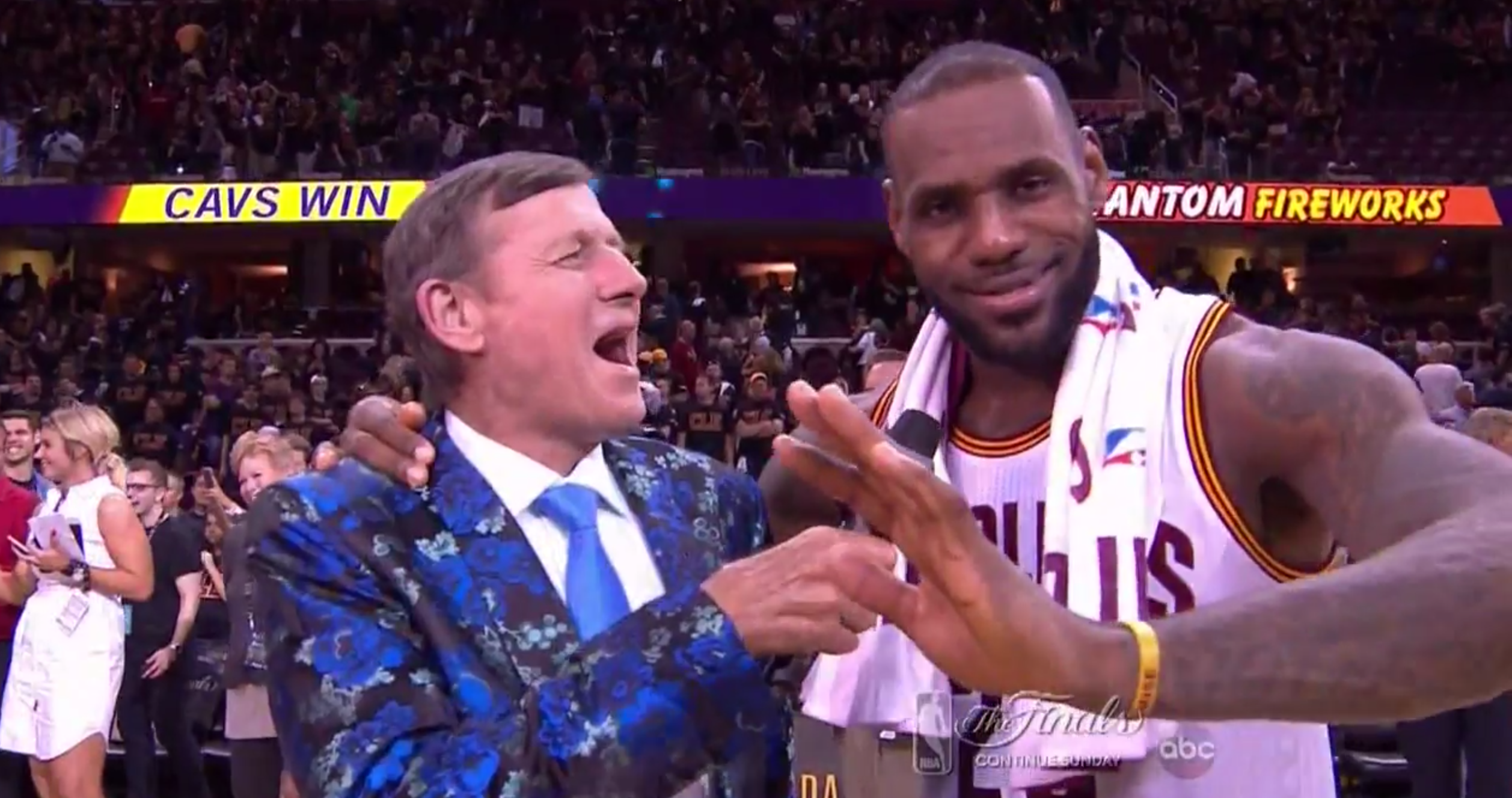 Let’s just get the somber reality and elephant in the room out of the way: This season could unfortunately be Craig Sager’s last covering the NBA.

I’m not predicting anything, nor am I claiming to have insight into his current health and battle with cancer. That’s just the heartbreaking reality of being in a fight with cancer. The best medicine, the best support, physical strength, and a strong will to live are all tremendous aids in trying to fight off cancer, but all too often, it’s just not enough.

With that out of the way, I can’t stop smiling thinking of Craig Sager’s guest appearance on ABC last night and the summer he’s about to embark on. In a rigid industry where politics and rivalry often trumps what fans clamor for, ESPN and Turner gave us — and more importantly, Sager and his family — the gift of having him work his first NBA Finals game. The impromptu gig provided many terrific moments including:

** Sager FaceTiming with Pitt running back, James Conner, who is in his own battle with cancer.

** As well as this memorable moment with LeBron:

Game 6 was entertaining, but not a classic. LeBron was ridiculous and yet when the smoke cleared, I think the highlights of the night were mostly Sager-related. The players, the fans, the coaches, the league, and the announcers all wanted this. It made perfect sense.

Yet all too often, no-brainer ideas in sports media often fall to the wayside. Big companies can be stubborn and often obtuse, with too much red tape and too many egos to please often standing in the way of giving fans one-off treats. But the seas parted last night and it was glorious.

However, we’re not done, and I’m not talking about the remote possibility Sager could have some role in covering Game 7 (update: he won’t as he has plans with his family for Father’s Day which is probably better). We’ll see Sager in Rio in a few months during the Olympics doing games for NBC. In between then and now, he’ll be honored at the ESPYs receiving the Jimmy V Perseverance award.

Some may find it overkill (those are terrible people), but the reality is that nothing is for certain with Sager, just as it wouldn’t be for anyone in his position. Just two years ago, Stuart Scott was given the same award months before his passing. Whether this summer ends up providing some of the last memories we have of Sager, or hopefully just a memorable and inspirational summer that serves as a backdrop for his recovery, these are moments that are important to him, his fans, and his family.

It was almost a year ago to the day when a very close friend of mine told me her dad was diagnosed with cancer. Her wedding was set for September. The doctors didn’t know if her dad would make it that long. He did, and when the big day came, he looked great and gave an amazing speech. I thought to myself maybe the doctors were wrong; maybe he’d beat the odds. On that September night, you could have sworn he had a lot of life left in him. Sadly, he died not long after. That’s how cancer works. NOTHING is for certain.

A higher up at ESPN or Turner could have nixed Craig Sager last night. Thank God they didn’t. We’ll be seeing a lot of Sager this summer, and even this typically cynical and always suspicious casual basketball fan thinks it’s nothing short of being simply just a beautiful thing.