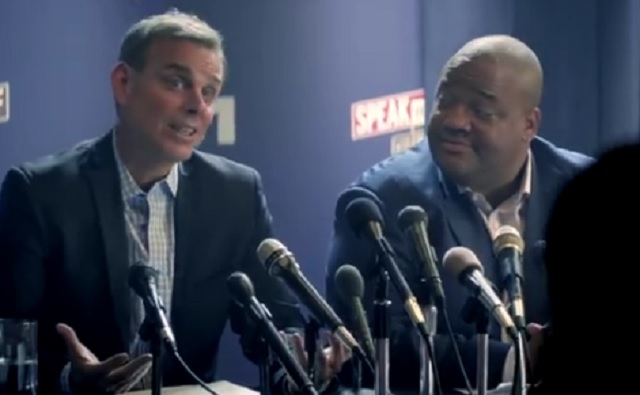 FS1’s attempt to embrace debate and revamp its late afternoon/early evening block once again started in earnest three weeks ago with the premiere of Speak For Yourself, the Colin Cowherd/Jason Whitlock PTI-style show. The early reviews of the show have been tepid, but with a pair of polarizing personalities like Cowherd and Whitlock, that was expected. You can either take them or leave them – there really isn’t much of a middle ground with those two.

The viewership for Speak For Yourself has been lambasted over the show’s three weeks on the air, bottoming out at a sad 35,000 viewers last Wednesday, June 29th. That’s obviously poor – in fact, as many people watched that episode as watched a 6 AM showing of Golf Central on Golf Channel.

However, there have been strong data points too. The show’s premiere on June 13th drew 94,000 viewers. On Thursday, June 16th, FS1 aired the show back to back at 4:58 PM and it’s usual 6 PM timeslot following the US Open. The early show capitalized on the strong lead-in (and start time before 5 PM), and drew 247,000 viewers, while the show in the normal timeslot drew 104,000 viewers.

Looking at only the 6 PM timeslot (a total of 11 shows, as data for June 30th wasn’t immediately available because of the holiday), Speak For Yourself averaged 60,000 viewers. If you include the 4:58 PM showing on June 16th instead of the 6 PM showing, the average jumps to 73,000 viewers. That’s all well and good, but it really doesn’t tell us much of anything. 60,000 or 73,000 viewers on ESPN or ESPN2 at 6 PM would be a disaster, but we’re not talking about ESPN or ESPN2 – we’re talking about FS1.

The two weeks prior to Speak For Yourself’s premiere featured a cornucopia of content during the 6 PM hour on FS1, from NASCAR practice to Copa America Centenario pregame shows to UFC Tonight to World Poker Tour. As you’d expected, the viewership was all over the map for this content on FS1. The three Copa pregame shows averaged 167,000 viewers. The poker drew 55,000. UFC Tonight drew only 42,000. In other words, some of the content picked up many more eyeballs than Speak For Yourself has been averaging, and some picked up less. One constant has been live events drawing strong numbers for FS1, which is to be expected.

How about FS1’s last late afternoon (non-NASCAR Race Hub) studio show, America’s Pregame? APG was canceled in September, and with a start time of somewhere between 4 PM and 5:36 PM over its last 12 episodes (the final one of which was on a Tuesday), it averaged 44,000 viewers before reaching its demise. The timeslot wasn’t the same as Speak For Yourself, but at the end of its lifespan, it was drawing far fewer viewers than Speak For Yourself on average (though again, lead-ins matter when talking this timeslot).

The late night lineup on FS1 is a different story, mainly because of lead-ins and variable starting times. Fox Sports Live has averaged 84,000 viewers since the launch of Speak For Yourself, topping out at 213,000 viewers on June 16th and cratering to 36,000 viewers on June 20th. The once a week Garbage Time is even more variable, going from 62,000 viewers to 226,000 down to 48,000 over the last three weeks. Best Thing I Herd has aired just five times since Speak For Yourself premiered, and averaged just 39,000 viewers. TMZ Sports, with start times ranging from midnight to 2:30 AM, has averaged 58,000 viewers over the last three weeks.

There are a lot of numbers here, and it’s easy to get overwhelmed. But here’s the jist of Speak For Yourself’s viewership after three weeks – it’s low, but not abnormally low for FS1. 60,000 viewers is a decent enough start after three weeks, especially considering we’re in the summer and the sports calendar is pretty sparse around this point of the year. If we get into October and November, and viewership is still stagnating around that number, then maybe FS1 has an issue with Speak For Yourself. But by then, Skip Bayless will be in the fold, and who knows what the evening lineup will look like?

For now, there really isn’t a strong conclusion we can draw either way about the viewership. It’s not ideal, but it’s far from the disaster many would have you believe.

All ratings data courtesy of our Douglas Pucci