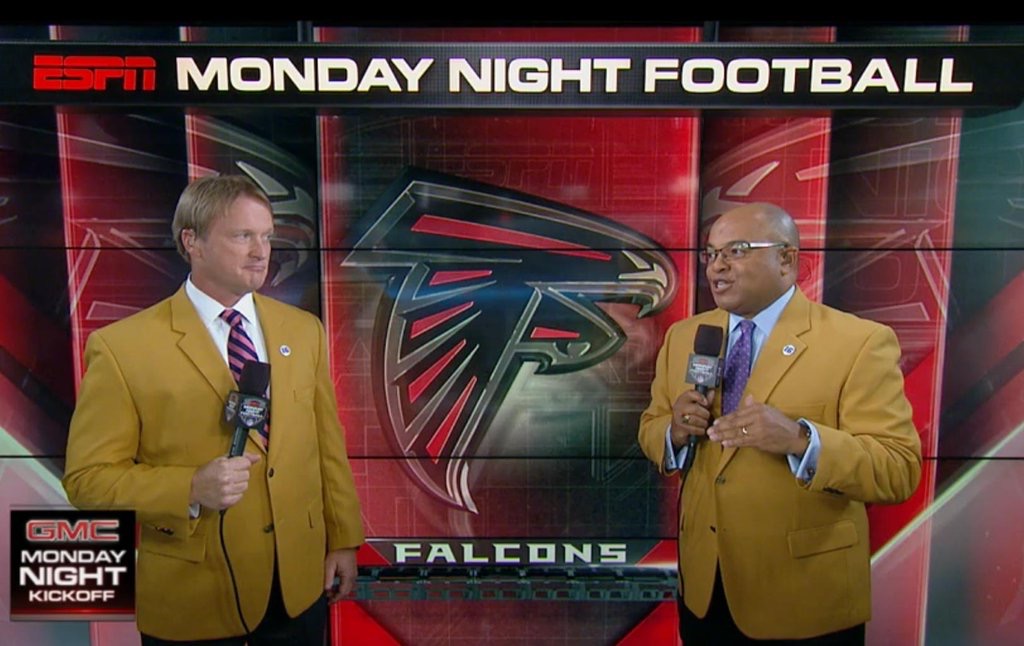 There’s been plenty of discussion of the slipping ratings for ESPN’s Monday Night Football, which has been declining for a few years and saw 2015 finish as the lowest-rated season since 2008 and the least-viewed since 2012, and now that discussion has entered the realm of academia. Researchers from the University of Iowa’s Tippie College have published a study (in a recent issue of Statistical Analysis and Data Mining) looking at mathematical models to analyze the various factors that MNF viewership, and conclude that their model could have produced 10 million viewers more per season from 2011 to 2013:

After analyzing years of Monday Night Football viewership, Tippie researchers have developed an optimization model that shows its schedules could be improved. Bhupesh Shetty, a management sciences doctoral student; Jeffrey Ohlmann, associate professor of management sciences; and Gary Gaeth, professor of marketing, analyzed every Monday Night Football game played from 1993 to 2008 and broke each game down into its various factors to see what has the biggest impact on a game’s Nielsen ratings.

Among the factors considered were the teams’ records, the date of the game, competing sports events on other networks, and the quarterbacks. But many of those variables that are strongest predictors of high ratings (the records of the teams playing, for instance) are unknown in April. So Shetty, Ohlmann, and Gaeth teased out the factors that are known before the season begins and could be helpful when putting the schedule together in the spring.

Those factors the study identified as having the highest impact:

This is all well and good, but this summary at least seems somewhat silly, as it’s implying that ESPN and the NFL aren’t already considering these factors. Of course they want the defending Super Bowl champions, as does every other network with NFL rights. Of course they want teams with offseason hype or high-powered offenses (and it’s notable that the latter can’t be completely predicted before the season starts; you’re going off past performance). Moreover, “optimizing” a schedule just for Monday Night Football seems foolhardy, as that’s not how NFL scheduling works; the league’s trying to keep all of its broadcast partners happy and give them desirable matchups and teams, so you can’t just say “Give ESPN the defending champions every week!”, as that wouldn’t work for NBC, CBS and Fox.

There are also non-ratings considerations for the NFL in making a schedule, including teams’ days between games, about early kickoffs for West Coast teams and late kickoffs for East Coast teams, and about logical road trips. Moreover, the league has to balance putting games that would draw the most viewers in prime-time windows with giving national exposure to some of its franchises with smaller fanbases. The summary notes that the Jacksonville Jaguars have consistently underperformed in the ratings more than anyone, but just saying “no Jacksonville” probably wouldn’t work; it certainly wouldn’t make that franchise happy. The NFL isn’t just about maximizing individual games’ ratings; it’s about maximizing the league’s profits, and while maxed-out ratings can help there, so can promoting some less-prominent franchises.

It’s not wrong to note that the NFL’s Monday Night Football schedule has been suboptimal recently, and that it probably could be improved and would draw better ratings as a result. However, you don’t need a mathematical model to do that; everyone’s well aware of most of these factors. In fact, some ESPN employees have said they believe the network’s been purposefully given a bad schedule thanks to NFL criticism from the likes of Bill Simmons and Keith Olbermann. Whether that’s true or not, giving MNF good games certainly hasn’t been a priority for the league lately.

That also might be about the broadcast-versus-cable divide. The NFL’s very focused on presenting good matchups for broadcast networks CBS, Fox and NBC on Sunday, That sometimes leaves Monday night on cable with the leftovers, despite ESPN paying way more than the broadcast networks. No model is going to change that.

The MNF schedule certainly could be further optimized, but that’s mostly about league willingness, not any factors the NFL and ESPN are unaware of. This particular mathematical model doesn’t seem to be addressing anything league and broadcast executives aren’t already considering. It also seems to overlook all the other considerations that go into NFL scheduling. But hey, they got an academic paper published out of it, so good for them.

[The University of Iowa]