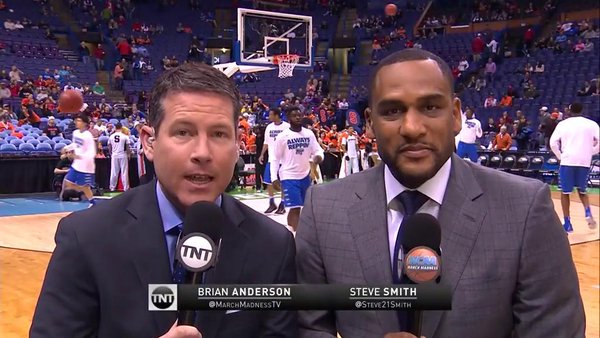 Before the first week of the tournament began, Awful Announcing caught up with Turner/CBS broadcasters Brian Anderson and Steve Smith.  With the pair calling a couple of dramatic games including Middle Tennessee’s upset over Michigan State and Wisconsin’s buzzer beater over Xavier, we were able to get their thoughts looking back at the first weekend of action and looking ahead to the Sweet 16 and Elite 8.

Middle Tennessee State’s mammoth, monumental upset over Michigan State last Friday was an event Brian Anderson could not describe in basketball terms when it comes to his broadcasting experience.

Anderson, the television voice of the Milwaukee Brewers during the spring and summer, compared calling a 15th seed upsetting a second seed to broadcasting a no-hitter.

“It’s as close to calling a no-hitter as I’ve ever had,” Anderson told Awful Announcing following a weekend of calling first and second round NCAA Tournament games last weekend in St. Louis with Steve Smith.

It was a whirlwind three days for Anderson and Smith, an experience Anderson best described as “out of body.”

“You’re so busy, you’re so focused, you’re so attuned to what you’re doing that you kind of lose touch with the rest of the world,” he said.

Anderson has called many thrilling tournament games— including his first March Madness buzzer beater on Sunday, which we’ll get to— but nothing like one of the great upsets in tournament history.

Middle Tennessee went up 15-2 early on and led by six at halftime over the vaunted Spartans, and Anderson went through his thought processes just like he would have with a no-hitter.

“Can they do this? Is this gonna happen,” Anderson wondered. “In a game where the teams are more evenly matched skill-wise, you don’t really have those thoughts. Like a no-hitter, can this guy actually pull this off? That’s basically what we were all thinking, when is the run going to come?”

Middle Tennessee led the entire game, much to the dismay of Smith, a Michigan State alum and supporter. If any game would test Smith’s objectivity, it would be one that could go down as the worst or most embarrassing loss in his program’s prestigious history.

“It was a tough call, but I think for me it was a great challenge,” Smith told Awful Announcing.

Former players end up calling their alma mater’s games at some point, Smith said, but he tried to be impartial and transparent despite how he was feeling during the contest.

“You would at least expect Michigan State to get further than losing in the first round, a two against a 15,” Smith said. “But that’s why we call it March Madness.”

Anderson was impressed with the way Smith handled himself.

“I told him after the game, I think that was one of the best games you’ve ever called with me,” Anderson said. “Not at any point during the broadcast did I feel like his allegiance to Michigan State was coming through in any way. Once you’re doing a game, you’re in the moment and you don’t think about it. You may think about it before and after, but [during the game] you’re just so focused.”

One regret Anderson had while calling the game was that he never made that declarative, headline-creating statement telling the audience how huge of an upset they just witnessed. That’s because, Anderson said, Middle Tennessee never played or acted like the gigantic underdog it was in that game.

“When I look back and think about the game and how it was going, at no point— and Steve Smith and I were having constant dialogue about it at the commercial breaks— did Middle Tennessee seem overmatched,” Anderson said. “They actually were the aggressors. They never trailed.”

Smith was especially impressed by how well Middle Tennessee head coach Kermit Davis prepared his team, something Smith saw at their team practice the day before the game, an important part of his pre-tournament prep work.

The Blue Raiders had different options and sets on both offense and defense, Smith said. They featured three zone defenses, 1-3-1, 2-3 and a matchup zone, as well as a man-to-man D.

“They looked like they belonged when the game started,” Smith said. “When the game ended, it wasn’t that usual 2-15 celebration moment.”

Middle Tennessee celebrated in a relatively understated way, knowing that they could win the game.

Smith’s practice prep work also came in handy for Sunday’s second round game between Wisconsin and Xavier, which ended in Anderson’s first career buzzer beater. It was evident to Smith after seeing the Badgers and Musketeers practice on Saturday that Wisconsin sharpshooter Bronson Koenig could have a big day.

“Because of the 1-3-1 zone they [Xavier] play and because of the multiple players that Chris Mack plays, that there wasn’t going to be just one guy that will be able to lock in on Bronson Koenig,” Smith said.

“He was right on the money with that,” Anderson said.

Koenig missed his first couple of 3-pointers in the game, but he kept shooting and got into a rhythm. His fifth made triple of the game tied it at 63 with 13 seconds left. At that time, CBS showed a key graphic, which noted Koenig’s very high shooting percentage in the final five minutes of games, much higher than his numbers over the first 35 minutes of games.

“We actually had that graphic prior to the 3-pointer that won the game,” Anderson said. “So those are the kinds of moments where everybody’s in sync; producer, director, graphics, announcers. That gives us all some satisfaction.”

After Xavier turned it over with five seconds left, Wisconsin advanced the ball to halfcourt and called timeout with two seconds to go. Anderson wondered aloud why you’d call a timeout in that situation, because Koenig had a decent look at a potential game winner. Smith replied that it was the right call to reset, draw up a play and give your team multiple options with your final shot and plenty of time remaining.

Anderson has called plenty of close tournament games that came down to the last possession, “but nothing that was—essentially, in baseball terms— a walk-off,” he said.

“I’m probably at my best when I just feel it, and whatever the moment is,” Anderson said. “For me, it’s let’s just describe what has happened and just let it flow.”

Anderson said he used to pre-determine potential game-winning calls when he announced minor league baseball, “but it sounded really awful.”

So Koenig caught the inbounds pass, rose up, buried the game-winner at the buzzer and Anderson, Smith, the Scottrade Center crowd and millions of viewers nationwide went crazy.

“Call it, lay out and let the artistry of our director Renardo Lowe and the replays of Scott Cockerill do their thing and let the emotions surface,” Anderson said about the procedure for the game’s final call. “So that was just a really amazing experience and I’m so impressed with Steve Smith and our crew and just the professionalism, the talent, the artistry of all the people I work with.”

And if calling two of the top moments of the first weekend wasn’t enough, Anderson and Smith will be back on Friday and Sunday to call the East Regional in Philadelphia— the pair’s first regional weekend— featuring North Carolina taking on Indiana and Notre Dame battling Wisconsin.

Preparing will be easier this week for Anderson and Smith, studying four tradition-rich, high profile programs rather than last week’s eight including the Badgers, who the duo had last weekend.

After a travel day on Wednesday, the four teams practice on Thursday, where Anderson and Smith get to talk to players and coaches and get a feel for who they think will be the keys for the Friday doubleheader.

Then at 7:27 eastern on Friday. Anderson and Smith will call Wisconsin-Notre Dame on TBS, where perhaps there could be yet another memorable March moment in store.