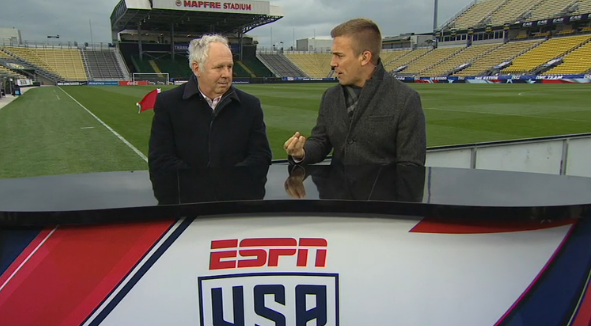 The European Championship has become ESPN’s World Cup.  For soccer fans, that’s both good and bad.  ESPN’s international soccer coverage has grown and excelled to the point where it’s at or near the top of the short list of the very best work of the network.  So while many fans will miss ESPN’s top notch World Cup coverage, it does mean that ESPN will pour all possible resources into making the Euros the best broadcasts they can be.

Today ESPN is announcing their lineup of match commentators for the European Championship from France this summer and it’s loaded with many World Cup veterans.  Ian Darke, fresh off his new contract with ESPN, resumes his role as lead play by play announcer.  Darke will call the France-Romania opener on June 10th as well as the final on July 10th.  USMNT analyst Taylor Twellman and Darke’s former EPL partner Steve McManaman lead the analyst contingent and will rotate matches with Darke depending on the matchup.

“I think it’s got bigger and bigger with every European Championship,” Darke told Awful Announcing.  “In a way it is our World Cup the way the rights have fallen so we’re looking to do as good a job with it as we did at the recent World Cups.”

This year’s tournament marks the first time that the European Championship has expanded to 24 teams, and Darke and Twellman see that as an opportunity for some Leicester-like underdog stories to emerge, both through the qualifying process and the finals itself.

“Probably in all honesty it drains a little of the drama out of the first bit of the tournament,” Darke said.  “But I think we’ve got to look at the European Championships as a whole before everyone rubbishes the whole thing.  The qualification period has been made far, far more exciting – Iceland, Northern Ireland, Wales, Albania, those have provided some wonderful narratives through the qualifying phase.  And of course, the Netherlands not making it.”

“Ian has convinced me on the Cinderella stories of it all,” Twellman told Awful Announcing.  “I love the 16 team tournament, always did, I thought qualifying was a bit more interesting and it’s still amazing the Netherlands didn’t make it with 24 teams.  But it’s kind of like Leicester – who knows if an Iceland or a Northern Ireland or Albania get through the group and get into the Round of 16 for the first time ever.  However, I still think the cream rises to the top ultimately and the final eight teams will be the final eight everyone expected.”

The popular British duo of Jon Champion and Stewart Robson also return after having a great run in the ESPN booth during the 2014 World Cup in Brazil.  According to ESPN, both the Darke-Twellman/McManaman and Champion-Robson teams will call all of their matches live from France while others will likely be done via remote.

Markgraf’s inclusion is historic as ESPN says she will be the first female analyst to call games in a top-tier global men’s tournament.  Markgraf has previously called international games on the women’s side for pretty much every major network that televises soccer in the states including the 2011 Women’s World Cup for ESPN.  Markgraf’s assignment comes just a few months after Jessica Mendoza was named as ESPN’s first female analyst for a full season of Sunday Night Baseball.

One of the elements that always circles around any American broadcast of international soccer is the nationalities and accents of the analysts.  Fox Sports made waves by proclaiming from the outset that they would give a more American voice to soccer broadcasts by predominantly using American announcers for the 2015 Women’s World Cup.  Going back to the 2010 World Cup, ESPN has relied on a mostly British contingent of match announcers and analysts.

It’s something Twellman says he is aware of – there are some fans who will always prefer that style and voice for soccer broadcasting.  However, in his newly expanded role after re-signing with ESPN, he says that it won’t cause him to shy away from giving his opinion during the Euro-centric tournament.  He even gave a poignant example of his experience as an American analyst talking about an international competition.

“I’m in studio at the World Cup and Ruud (Van Nistelrooy) is next to me,” Twellman said.  “And I said to Ruud because we’re going over our Twitter feed in the first half, ‘Ruud here’s what we’re going to do at halftime, I’m going to say the exact same thing you say and watch our Twitter feed.’  And he said something about the left wing going forward and I said, ‘you know what Ruud that is a good point’ literally almost verbatim and we went on our Twitter feed and he said ‘oh my God.’  I got death threats and ’how are you sitting next to Ruud’ and all that.  I’m not naive enough to understand that, because I don’t have an accent I don’t know what I’m talking about.  I get it.  It’s not going to stop me from doing my job and giving an opinion.”

Jeremy Schaap and Julie Foudy will be reporting live from France throughout the tournament for ESPN while Manu Martin and Martin Ainstein do so for ESPN Deportes.

ESPN and ESPN2 will have live coverage of all 51 matches of the European Championship while ESPN Deportes will cover 45 matches.

And with Fox Sports televising the Copa America Centenario this summer (after doing a much better than expected job broadcasting the World Cup) while ESPN televises the European Championships, it means soccer fans will have a beautiful feast of the beautiful game.  Soccer fans may have as many as five games a day this summer with ESPN televising the Euros from France in the morning and afternoon while Fox provides coverage of Copa America in the evening hours.

“Sit back with a beer and watch it unfold,” Darke said.  “How often has that been the case in history?”