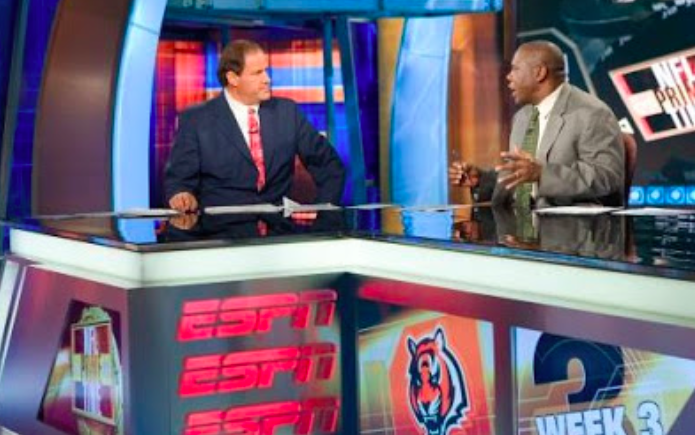 With Tom Jackson officially retiring from ESPN, it brings down the curtain on one of the most decorated careers in sports television.  For almost 30 years, Jackson was one of ESPN’s lead analysts for the most popular sport in America.  Alongside longtime partner Chris Berman (who also may be moving into retirement in the near futurel) the pair made an indelible mark not just on ESPN, but on sports television as a whole.

Berman and Jackson will always be synonymous with their years of work on NFL Primetime, ESPN’s NFL Sunday night highlights show.  NFL Primetime ran from 1987-2005 every Sunday night on ESPN after the late afternoon games were finished.  Once NBC won the rights to Sunday Night Football in 2006, ESPN shifted its Sunday highlights to a subset of the evening SportsCenter called “The Blitz.”  With NBC having more extended highlights and more of a football focus, it hasn’t quite been the same.

And although Berman and Jackson have worked with others like John Saunders and Robin Roberts and Trent Dilfer throughout the years, Primetime was their show and their showcase.  When it comes to prominent pairings in sports broadcasting, they’re certainly in the conversation of greatest ever in their field because of their longevity and success working together.  It’s unfortunate that Jackson never got the credit for not only being able to expertly analyze game footage, but also being able to play off of Berman’s antics so successfully for so long.

Here’s what Berman, Jackson, and former ESPN exec Mark Shapiro said in Jim Miller’s Those Guys Have All The Fun about ESPN losing NFL Primetime when NBC took over Sunday Night Football rights in the mid-2000s.  (Be careful for the NSFW language.) 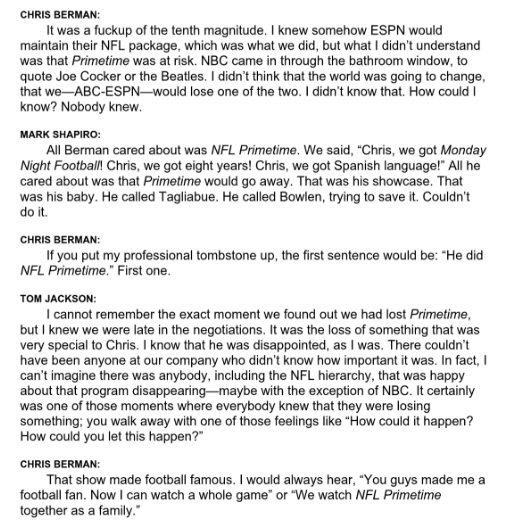 That’s how strongly they, Berman especially, felt about the program and it’s hard to find fault with that.  Now, maybe it’s a stretch for Berman to say Primetime “made football famous” as people like Johnny Unitas and Joe Namath might raise their hand to object.  However, Primetime certainly aided football’s growth to where it has become the unquestioned king of American sports and entertainment.

The legacy of Berman and Jackson’s work on NFL Primetime can’t be overstated.  In fact, in terms of transformational sports shows, Primetime might only be behind SportsCenter for the impact it had on the medium.

For a moment, take a step back and remove whatever you feel about Chris Berman now or how he hasn’t evolved or how he’s done the same routine for 30 years.  In his prime, Berman was the most influential sportscaster in America.  And back when all the nicknames and sound effects were new and fresh and beloved, it totally changed what sports highlights could be.

Then take another step back and remember that during most of NFL Primetime’s run there was no NFL Sunday Ticket, no RedZone Channel, no social media, no instant highlights, none of what we have today at our fingertips.  Primetime was the way for you to see all of the great plays, touchdowns, turnovers, and bloopers.  It was appointment viewing for sports fans.  If the era of the sports highlight show has passed us by in 2016, then it’s fitting that Jackson and Berman’s ESPN careers might both be drawing to a close because they helped to define the highlight show and bring it to the forefront.  Without NFL Primetime, there might not be a RedZone Channel today.

NFL Primetime took highlights to the next level in many ways.  Berman’s personality transformed the entertainment value of the highlight.  Instead of relaying information, stats, and play by play of a replay, Berman made it his own personal playground and brought an entertainment aspect.  It fundamentally changed what a highlight could be.

A generation of sports anchors followed, all with their own catchphrases and personalities because Berman broke that ground and became a phenomenon in doing so.  There’s a reason why ESPN has been so careful in letting their stars get too big and so willing to let even their highest profile personalities go elsewhere in recent years – because ESPN doesn’t want another person to become bigger than the network like Berman.

Then there was the soundtrack.  NFL Primetime’s themes are legendary.  That music could turn even the most mundane matchups of sub-.500 teams into a movie epic.  And with the music playing over extended highlights of games – so fans could see all the important plays and how the game was won and lost – each highlight package was like its own Hollywood short film.

Watching these highlights gets us just a little nostalgic.  Many of us grew up with NFL Primetime and these awesome highlight packages.  Why else do so many older millennials and Gen X/Yers yearn for “the glory days” of SportsCenter and other highlight shows?  Yes, we know they aren’t coming back because it’s not practical in a day and age when those highlights have likely already been seen.  But in this day and age, these highlights would be condensed to just a couple minutes on SportsCenter, followed by a dozen minutes of talking heads.  It’s obvious what the superior product truly is.  And even though the sports highlight may not be what it used to be, its influence is still seen across television.  At the very least, Primetime made it possible for sports highlights and analysis to be more than just taped footage.

Primetime was never better than late in the season when it bounced back and forth between games with playoff implications.  Just watch this scenario from 1999 when the Panthers and Packers were battling for a playoff spot and it came down to point differential.  It’s 17 years later and it’s hard not to get caught up in the excitement.

It’s impossible to quantify, but the NFL would not be where it is today without NFL Primetime.  Maybe it didn’t “make” football, but it surely helped get to where it is today.  Millions of football fans grew a deeper appreciation, interest, and love for the sport thanks to Primetime.  Perhaps most significantly, Primetime made fans of one team fans of the league as a whole.  Because you didn’t just flick Primetime on to watch your team’s games and then turn it off.  You couldn’t turn it off because all of the highlights were just that good and that cool.  Sure, you might be a Cleveland Browns fan, but you could watch highlights of Barry Sanders or Jerry Rice and fall in love with them as players.

No other show has been so synonymous with a sport.  College GameDay and Inside the NBA are widely regarded as the two best studio shows in sports today, but not even those shows have had the impact on the wider fandom that NFL Primetime had.  No other show can come close.   And with the current state of highlights and the sports media as a whole, we can safely say that there will only be one NFL Primetime.