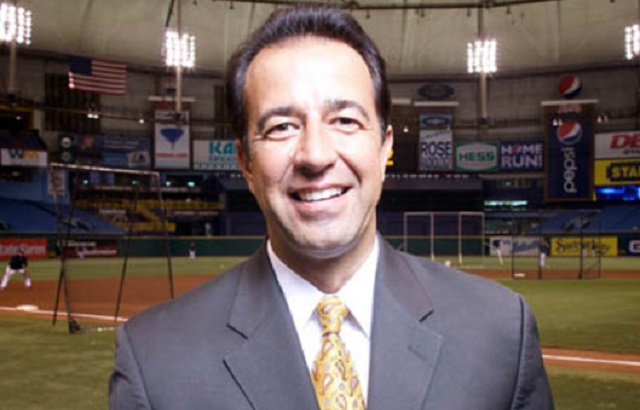 The Houston Astros will have a new play-by-play man for their game broadcasts on Root Sports Southwest next season, and it’s something of a surprising choice. Todd Kalas, who has worked on Tampa Bay Rays broadcasts with Fox Sports Sun for the past 18 years, will return to his birthplace, where his legendary father Harry called games from 1965 to 1970.

Kalas has been on Rays telecasts since their inaugural season in 1998, serving as a pre- and post-game host, as well as an in-game reporter. He takes over for Bill Brown, who retired following the end of last season. Brown had been in the broadcast booth for the Astros for the past 29 years. Kalas will be paired with Geoff Blum, who has been an analyst on Astros broadcasts since 2013.

Being part of the team’s broadcasts for nearly 20 years — becoming a face of the team in some regards — creates a bond with fans, and certainly leads to the announcer feeling attached to a team and its community. That obviously applies to Kalas, who recorded a message to fans, thanking many within the Rays organization and Fox Sports Sun, and posted it to Twitter.

Tampa Bay will always have a special place in my heart! pic.twitter.com/lSz8kkEOVT

“I always said unless a perfect scenario happened, I can’t imagine leaving,” Kalas said. “Well, that perfect scenario has occurred for me, as this past offseason after a search, I’ve been named as the new television voice of the Houston Astros doing play-by-play for Root Sports.”

Approximately three years ago, rumors swirled that Kalas might go to Philadelphia and call Phillies games as his father did for 38 years before his passing in 2009. The son taking over for the father seemed like a natural, sentimental fit. However, Tom McCarthy has been the Phillies’ play-by-play man since the 2008 season, so there wasn’t exactly an opening. (Speculation linking Kalas to the Phillies gig began when the team replaced TV analysts Chris Wheeler and Gary Matthews.) It could also very well be that Kalas didn’t want to succeed his father in the Phillies’ broadcast booth, as nice a storyline as that might have been.

But the opportunity to call play-by-play for the team he grew up with early on was apparently too appealing to resist. Kalas did fill in on play-by-play and color commentary on the Fox Sports Sun Rays broadcasts, but his primary role was as a host and reporter. The opportunity to be the voice of a team, not to mention a Houston Astros club that’s up-and-coming and potentially a playoff contender for years to come, was obviously too enticing for Kalas to resist. If the Astros fulfill their potential, we could be hearing a lot more of Kalas throughout the country during the next few seasons.