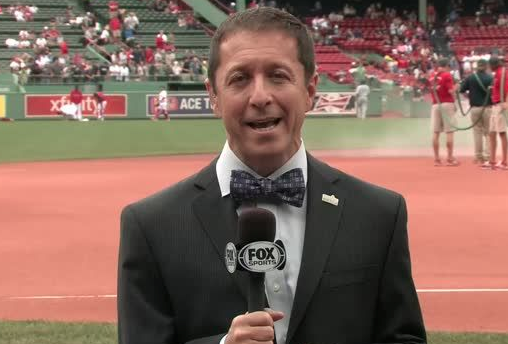 When Sports Illustrated and Fox Sports announced a content- and revenue-sharing partnership about five weeks ago, details were a little vague. We knew that the outlets would be syndicating each other’s articles, combining web-traffic numbers and collaborating on special projects, but it was unclear exactly how all that would look.

On Monday, SI published an introduction to the partnership, describing some of the joint ventures.

To be clear, this is a partnership between two digital properties and not a television one. There are no plans for, say, a Richard Deitsch-Clay Travis talk show, but we will bring together top talent for digital collaborations around Fox’s biggest TV events. Tomorrow, for example, Tom Verducci and Ken Rosenthal will preview the MLB playoffs in a special live MLB postseason edition of SI Now (Airing at 1 p.m. ET on SI.com). It won’t be the last conversation between arguably baseball’s most two connected voices, as Verducci and Rosenthal—friends for more than two decades—will be manning opposite dugouts as reporters for the NLCS and World Series. Beginning with the NLCS, which will be carried by Fox/FS1, Verducci and Rosenthal will be part of a Fox/SI co-produced pre- pregame show that will be hosted by Kevin Burkhardt. On Friday, SI’s Andy Staples join Joel Klatt’s college football live show from the grounds of the Texas State Fair in Dallas, previewing the Red River Rivalry and all of college football’s big Saturday games. The show will be streamed on Facebook, and will also feature former Texas and Oklahoma greats Vince Young and Brian Bosworth.

(We’ll get back to the partnership in a second, but can quickly pour one out for the Richard Deitsch/Clay Travis partnership that never was? That would be amazing. Well, until like 10 minutes in, when it would probably become unbearable. But still.)

Basically, the partnership seems to have two facets (in addition to the unseen benefits of sharing advertising revenue):

1. Sharing of basic content, which gives Fox the journalistic presence it largely lacks and maybe eases the burden on both outlets’ breaking-news operations. This also allows SI and Fox to combine ComScore numbers and challenge ESPN’s page-view totals. According to the Wall Street Journal, the two companies combined attracted 68 million unique visitors in July, not far behind ESPN’s 79 million uniques.

2. Digital cross-promotion for reporters and personalities at both outlets. Rosenthal gets some shine on SI (not that he really needs it), Staples gets to pop in on Fox Sports, and both organizations gain access to a wider network of big-name analysts. SI and Fox Sports both do a lot of digital video, and now their collective war chest is substantially larger. SI Now, a priority for Sports Illustrated, gains some extra credibility and viewership by having on Rosenthal or maybe Jay Glazer or even Colin Cowherd.

The partnership launches this week, just in time for the MLB Postseason and a full slate of NFL and college football games. We’ll keep an eye on how it goes.