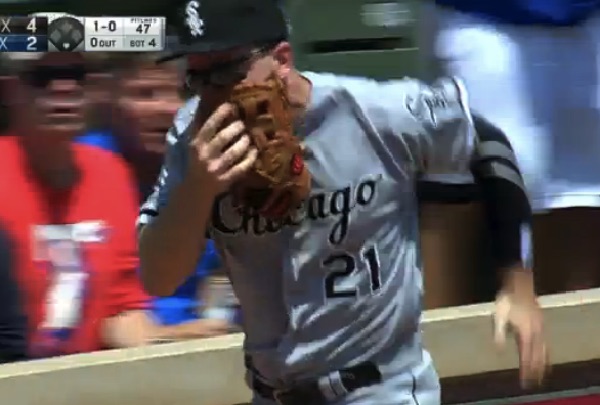 Calling games for a major league team throughout a full season is bound to create some personal connections between a broadcaster and players. That’s a lot of time spent around each other and a significant investment of time and energy.

Even a broadcaster like Chicago White Sox TV play-by-play man Ken Harrelson, who cut back his schedule to 81 games this season (which may be his last), still feels a connection to a team whose games he’s called for 30 years. Letting some personal feelings show when something upsetting happens on the field is probably natural (if not always professional).

Yet Harrelson may have gotten a bit dramatic on Wednesday when he said he was leaving the booth to check on Todd Frazier, who suffered an injury to his face during the fourth inning of the White Sox’s game versus the Texas Rangers. Here is the play where Frazier got hurt:

The image of Frazier jumping up with his glove covering his face, then immediately running to the clubhouse was certainly troubling. He didn’t even stay on the field to be looked at by a trainer, which indicated that he knew something bad had happened, maybe something fans didn’t need to see.

As it turns out, Frazier did indeed need five stitches to repair a lacerated lower lip. Though you can’t see the actual impact, it’s pretty clear from the video that Frazier’s face hit a seat quite hard as he dove into the stands after a foul ball.

But Harrelson didn’t just want to wait for an update to come up to the broadcast booth. Upon seeing Frazier quickly leave the field, he informed colleague Steve Stone that he was going down to the clubhouse to see what happened. “I’m going downstairs,” he told Stone, actually interrupting him. “You take over.”

We probably shouldn’t poke fun of Harrelson for showing some compassion after what looked like a potentially nasty injury. But that didn’t stop several people from making cracks on Twitter.

Where is the Todd Frazier update from Chief Facial Injury Correspondent Hawk Harrelson????

What exactly was Hawk aiming to accomplish by dashing downstairs, anyway? Did he feel he could offer a medical opinion? Hold Frazier’s hand as they administered the stitches? Apply the sutures himself? (Hey, we’ve all watched the doctors do it on ER! Maybe Hawk practiced on a pig’s foot too.) Put back the tooth that may have been knocked out?

Hawk Harrelson said it appears Frazier's teeth went through his lip. "I'm no doctor, but it appears he'll be okay."

Well, OK — that is a bit more graphic account of the injury than Harrelson may have had, if he were simply passing along news he was given. At least Hawk clarified that he’s not a doctor, in case anyone was unclear on that after his urgent dash to Frazier’s side.

Again, Frazier’s injury did appear to be rather serious and the visual of him covering his face, running off the field in apparent fear of what happened was indeed disturbing. But Harrelson’s job is also to call the action that transpires on the field and he basically abandoned that duty, which doesn’t seem like the most professional conduct.

Then again, Harrelson has enough tenure and status that he can probably do just about whatever he wants. (I mean, just listen to his play-by-play calls when the White Sox give up a home run or lose a ballgame.) And if this is indeed his final season, Hawk doesn’t really have to worry about his job status.

Still, we’ll await word on whether or not Harrelson accompanies Frazier home Wednesday night and perhaps watches him sleep through the night. Someone probably has to make Frazier soft scrambled eggs, oatmeal or smoothie in the morning too. And the White Sox are off Thursday, so Hawk will have the time.