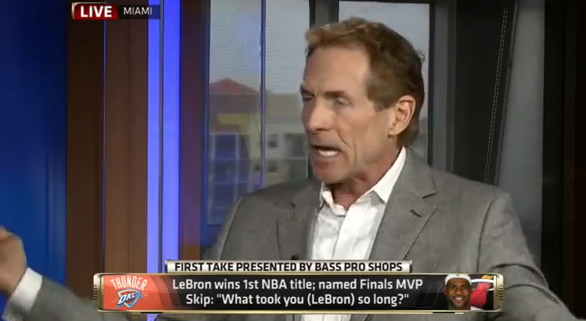 First Take is one of the worst shows on the ESPN family of networks. It is also one of the most profitable. The show’s complicated standing has – quite frankly – turned Stephen A. Smith into one of the most powerful names at the Worldwide Leader, with an impressive salary to boot. Its other host, Skip Bayless, will be negotiating for a new contract this year and could end up earning $4 million a year to do his thing.

It would be a shock to see Bayless embracing debate elsewhere, but in a time where other ESPN mainstays like Simmons and Cowherd have traveled elsewhere, it’s not out of the realm of possibility.

What if Skip Bayless did eschew ESPN and sign elsewhere? The scenario of Bayless leaving Bristol proper would obviously change the look of First Take, but ESPN would be tasked with finding a replacement who could both put up with and hold court with Smith.

At 64-years-old, Bayless continues to host the show every morning, even as he has reportedly started to become jaded with the amount of work he is doing compared to Smith. That does not mean Bayless is definitely going to leave, but he will have other offers, likely including one from the man behind Embrace Debate, Jamie Horowitz, and Fox Sports.

If Bayless leaves ESPN, First Take will lose half of its firepower. No matter what you believe about the show, there is a lot of chemistry between the two hosts. It might not be much more than hot takes, but they enjoy each other’s company on the air. In fact, according to an interview the duo did with Larry King, it was Bayless who reached out to Smith to get the current iteration of the show on its feet. And it seems like they enjoy screaming at each other about their perceived influences on professional athletes. One guy screaming looks stupid, but two people screaming at each other is entertainment!

Who are some ESPN personalities that could match Stephen A. Smith in both opinions and passion? Highly Questionable co-hosts Dan Le Batard and Bomani Jones have both been known for their strong opinions and sometimes questionable actions, but they have their own show and respective radio shows, as well. However, it would be surprising to see ESPN take from another already established brand to replace Bayless. That likely knocks out shows like Pardon the Interruption, His & Hers, and SportsNation.

Around the Horn already has a debate going, albeit between four voices instead of just two. That does not mean panelists cannot be outspoken, however. Most of ATH’s competitors – Kate Fagan, Israel Gutierrez, and Pablo Torre, to name a few – tend to be more progressive voices on the show. ESPN could very well promote one of those panelists to a starring role, but it would fundamentally change First Take into centering on a generational gap show because those individuals are much younger and not from the same ilk as Bayless or Smith.

If ESPN is looking to complement Smith more directly, a writer like Frank Isola would be perfect. Isola is a veteran of the Knicks beat for the New York Daily News, which is a blessing and a curse in relation to First Take. Smith is a New Yorker himself and having two guys from the same city might alienate the national audience. Geography aside, Isola is someone who could hold his own against SAS, but it’s hard to imagine he’d create the same waves ESPN is used to making.

ESPN Radio hosts like Freddie Coleman and Jorge Sedano have been substitute panelists in the past and could potentially be options. ESPNU also does a “college” edition of First Take so it might be natural to call up someone like Jason Sehorn or Robert Smith to the main show.  If you’re looking for an outside-the-box option, even former NFL on CBS analyst Shannon Sharpe has the experience of guest hosting in the past as well, and we all know he’s never shy of opinions.

Who else is out there? When it comes to bluster, the only person who could compete with Smith and Bayless might be Jay Mariotti. Currently the sports director of the San Francisco Examiner, he was once neck-and-neck with Woody Paige in ATH wins before recurring legal issues – domestic violence, specifically – led to his ejection from the Mothership. A truly bizarre set of circumstances led to one story on ESPN.com in 2013, but aside from that blip, he has remained out of the limelight. It’s almost impossible to think ESPN would give him a daily role on one of its signature shows, but you could have said the same thing about a freelance assignment as well.

If ESPN is unable to find someone to replace Skip Bayless, First Take could be retooled, even reviving its Cold Pizza format and return to more of a sports version of a typical morning show with interviews and news features. Given the ratings success the program has had though, (and the way it’s infiltrated other ESPN studio shows) the show in its present format may have grown large enough to survive without its pioneer.

No matter how you look at it, envisioning First Take without Bayless is an incredibly difficult endeavor. Aside from the fact that ESPN would have a tough time replacing Bayless, it would be very unexpected to see him sign anywhere but ESPN. In the aforementioned interview with Larry King, who was filling in on Olbermann, both Bayless and Smith were very complimentary. “He’ll debate anybody.” Smith said of Bayless, “When it comes to First Take, I’m not doing it without him.” Later on in the interview, Bayless said, “I really love [Stephen A.]. I would not want to work with anyone else and he knows this.” It would be a shame if Bayless left the show, but at least you would know what to expect going forward without him. Much like if you knew what to expect for sports results on professional games, why not bet on a sports betting site?

With that in mind, it sure seems like ESPN2’s favorite fighting married couple isn’t going anywhere. But even if Smith and Bayless go their separate ways, don’t expect ESPN to stop embracing debate.

Alex Kaufman is a Spanish and communication double major at Denison University. He loves to consume and cover sports and sports media, hosts a sports talk show on 91.1 WDUB, and can be found on Twitter @NSF_Alex and at his own website, neuroticsportsfan.com.

View all posts by 10up