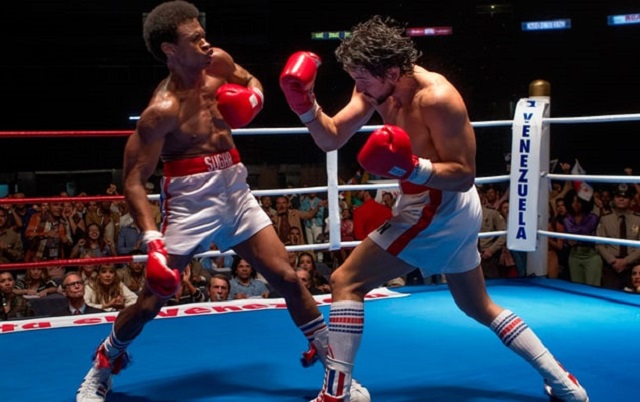 It’s disappointing to say, but there’s no other way to put it: Hands of Stone is a mess. Writer-director Jonathan Jakubowicz undoubtedly has a great love for boxer Roberto Duran, but that admiration may have prevented him from making some tough choices that would have resulted in a better film.

A mistake that biopics often make is trying to cover too much of their subject, to cram a person’s lifetime into a two-hour movie. By trying to include everything, the important things likely won’t get the attention they should. Jakubowicz chooses to begin with Duran as a boy, showing how national pride became important to him as Panama and the United States battled over the Panama Canal. More importantly, Duran (played as an adult by Edgar Ramirez) was hungry and angry. Boxing became the best way for him to channel that rage and make some form of a living. That hunger and anger affected him throughout his life, making him reckless in the ring and with his personal life.

But even if Jakubowicz decided that’s the story he wanted to tell, he makes the curious decision to begin the movie from the perspective of Ray Arcel (Robert De Niro), a legendary trainer who guided 17 boxers to world championships. Arcel was a key figure in Duran’s life, training him throughout his professional career outside of Panama after he won the WBC welterweight championship from Ken Buchanan. Duran was largely a brawler, but Arcel taught him technique and strategy, which took him from being a good fighter to a great one.

Though telling Duran’s backstory and how Arcel came to be his trainer were important to showing the boxer’s ascension to glory, along with how fame and success eventually indulged his most self-destructive tendencies, those story points may have been better served as flashbacks. Perhaps Jakubowicz could have looked back at those formative times during training or fight scenes. The boxing sequences probably could have used those cutaways to help break up the rather mediocre action in the ring.

Jakubowicz mostly settles for close-ups of the fighters trading punches, mixed in with overhead crane shots that establishes the space the boxers are working in. There’s none of the visceral intensity that such going in tight with the cameras created in movies like Raging Bull, nor any of the energy in following the fighters around the ring with handheld cameras or long takes that we saw in Creed.

Maybe Duran’s boxing style didn’t lend itself to fluid, graceful action with the camera essentially dancing with the fighters in the ring. He was more of a brawler, especially early in his career, who relied on his devastating punching power. He didn’t try to wear opponents down or rely on superior conditioning. Duran was in there to knock you out, and if he could do it sooner, that meant he could reward himself with a sweet treat that much faster. But I don’t think you could argue that Jakubowicz and cinematographer Miguel Ioann Littin Menz shot the fight scenes in a style that resembled typical boxing action. The fights are shot more like something you’d see in a Rocky film with boxers standing toe-to-toe and trading punches back and forth with little lateral movement.

Perhaps we should thank Sugar Ray Leonard for forcing the camera to pull back a little bit for a better view of the ring action. Leonard’s movement and footwork was especially important in the 1980 rematch with Duran, acting with cartoonish flamboyance to taunt his opponent and hurt his pride. Usher Raymond IV is arguably the film’s greatest surprise with his portrayal of Leonard. Though he’s helped by prosthetics to more closely resemble the real fighter, Usher portrays his charm and athleticism well, in addition to his anger at letting Duran get into his head before their first fight with personal insults and brash intimidation.

Hands of Stone is at its best when retelling the story of the two fights between Duran and Leonard, which were arguably the defining moments in each boxer’s career. So it’s baffling that Jakubowicz didn’t realize that he should have built his entire movie around these two bouts and the rivalry between the two fighters, rather than attempt to tell a wider-spanning story about Duran’s career. Duran’s wife (Ana de Armas, War Dogs) tells him that he needs to fight Leonard to show he’s the best boxer in the world and moves up in weight class to do so. Amazingly, the movie doesn’t mention that, nor the fact that Leonard was paid six times what Duran was for the fight. Why much of the film portrays Duran with a constant chip on his shoulder and a blatant disregard for authority, yet didn’t make a big deal of this is truly perplexing.

But perhaps the greatest disservice of this entire movie is how little it explores the signature moment of Duran’s career, quitting the rematch with Leonard in the eighth round with the infamous words “No Mas.” Did Duran quit because he’d had enough of Leonard’s antics and showboating in the ring, making a mockery of the fight in his view? Was he tired, notably because of having to lose 40 pounds in three months because of the quickly scheduled rematch, and a supposed eating binge after the official weigh-in. Had Duran simply lost his drive after defeating Leonard for the world welterweight title, bringing him all the riches and fame he ever dreamed of? We don’t know, because the movie never bothers to tell us. If there was a storyline this movie should have dug deep on, it was this one.

Perhaps Jakubowicz wanted the audience to draw its own conclusions, presenting the short training period, rapid weight loss, Duran’s management looking to cash in a huge payday, and Don King’s refusal to move the fight back as among the many possibilities for the decision to quit. The movie does attempt to say that Duran was never ready for that fight, and didn’t want to fight Leonard again so soon. He was too busy enjoying life, indulging all of his appetites. It was Leonard who pushed for the quick rematch, eager to get revenge and knowing Duran’s tendencies to enjoy himself when he wasn’t training. Leonard also learned from the mistakes he made in that first bout, namely that he let Duran mess with him psychologically and tried to fight the brawler on his own terms.

The rivalry between Duran and Leonard is fascinating, continuing even toward the final act of the story when Duran is attempting his comeback following the humilation of “No Mas”? Leonard shows that he has deep professional respect for Duran and wants to see him get back in the game. Duran, in turn, respects Leonard, is touched by his grace and is remorseful for his prior actions fueled by his total lack of humility at that point in his career. This should have been what the entire movie was about, even if Jakubowicz preferred that the story be told more from Duran’s point of view.

Instead, the movie veers off in different directions, explaining why Arcel got out of boxing before agreeing to train Duran and how his estranged daughter forced him to focus on the family he neglected for so many years. If Jakubowicz wanted to tell Arcel’s story, he should have made a movie about him. His career is certainly deserving of it. But because this film is supposed to be about Duran, the script has to cut corners. For instance, the story gives the impression that Arcel gave up training after Duran’s rematch with Leonard. However, he went on to train Larry Holmes after that. No, that’s not important to Duran’s story, but don’t make it seem as if Arcel never returned to boxing.

Hands of Stone actually cuts off a lot of Duran’s history following his comeback from the rematch with Leonard. To be fair, Duran’s professional career spanned 30 years as he fought until he was 50 years old. That’s way too much ground to cover in a two-hour movie. But Duran had several fights before his supposed “comeback” match with Davey Moore. He also had memorable fights with Marvin Hagler, Thomas Hearns and Iran Barkley, some of the most famous boxers in the sport. If the intent was to tell the story of Duran’s boxing career, shouldn’t those moments have been somehow included, even mentioned just before the credits? If not, why not just focus on the rivalry with Leonard entirely?

It’s a shame that this movie doesn’t work because Ramirez is fantastic as Duran, obviously getting in fantastic shape to depict him in the ring and conveying his stubborn bravado well. A significant obstacle that the film faces is that Duran simply isn’t that likable a person. He’s not easy to root for. Yet Ramirez does give him a roguish charm. De Niro is also very good as Arcel, but that’s not a surprise. It would have been more fun to see him play a more full version of Arcel’s story, however. Both the actors and the characters they portray deserve far better, as does an audience that loves a good boxing film.