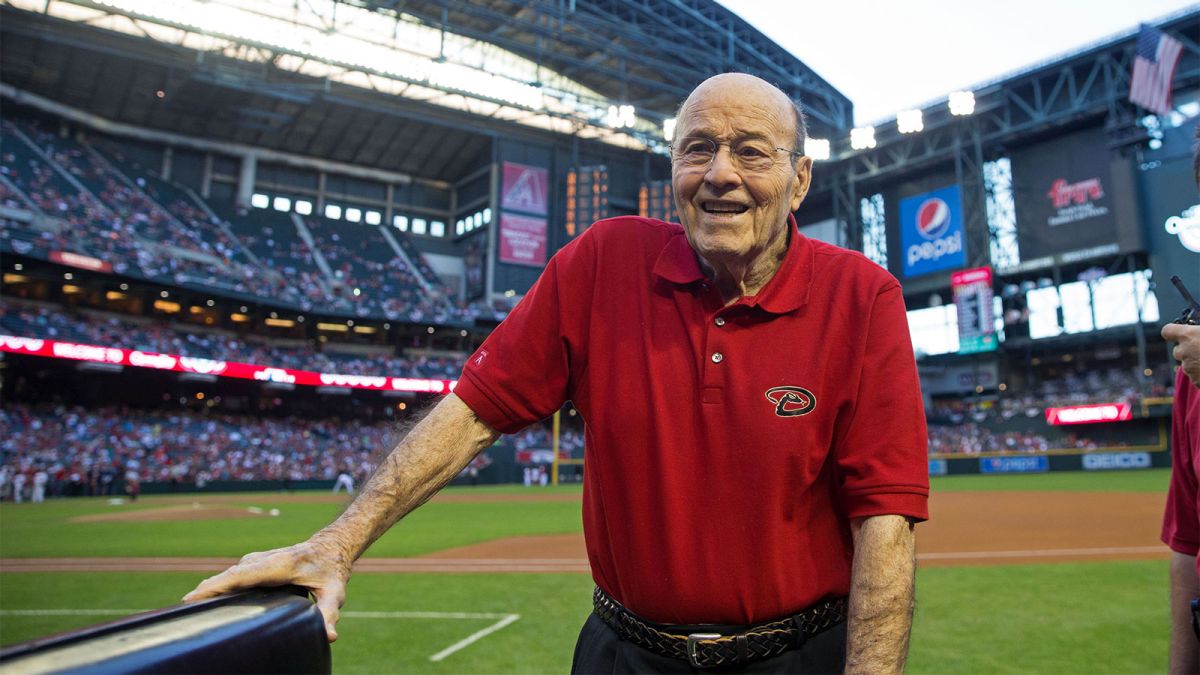 Joe Garagiola may have famously been “the second-best catcher from Elizabeth Street in St. Louis” (thanks to growing up with the legendary Yogi Berra), but he had an incredible impact on the world of baseball in his own right. Garagiola passed away at 90 Wednesday, and he’s been fondly remembered for his decades of work broadcasting baseball on radio and TV, his work on The Tonight Show and The Today Show, his time as a game-show host, his status as a best-selling author with three memorable books, and his work with the Baseball Assistance Team (to help former players in need) and the campaign against smokeless tobacco.

It’s what he did as a broadcaster that’s perhaps most relevant here, though, calling local games for the Cardinals, Yankees, Angels and Diamondbacks and spending a long time with NBC on national games, including three World Series. That led to Garagiola receiving the Ford C. Frick Award (the Baseball Hall of Fame’s annual broadcasting award) in 1991. MLB.com’s Marty Noble has a good piece on Garagiola, including a solid overview of his broadcasting career:

Garagiola began his broadcasting career shortly after his retirement as a player, calling games for KMOX, the Cardinals’ flagship radio station, for decades. He had spent his first 5 1/2 seasons in the big leagues with the club, starting about 50 games per season.

He began working national radio broadcasts in 1961 while still working Cardinals games, and eventually handled World Series broadcasts, too. A three-year gig doing play-by-play on Yankees telecasts began in 1965, Berra’s first year not with the club. Garagiola was proud to point out that he called the 500th career home run of Mickey Mantle. “Ya know, Mickey and I combined for almost 600 home runs,” he later said.

His radio and Yankees experience prompted NBC to rehire him, but for television. He did pregame shows for the “Game of the Week” telecasts and eventually moved into the booth and back to play-by-play responsibilities.

Garagiola worked three World Series, three National League Championship Series and three All-Star Games, and at various times shared the booth with the likes of Vin Scully, Tony Kubek, Harry Caray, Dick Enberg and Curt Gowdy. “They always put you with guys with lots of hair,” Berra said to him in 1984, “so it evens up.”

Garagiola roared. “We should have brought Oscar Gamble in,” he said.

He also worked Angels and D-backs games after his association with NBC ended.

Garagiola did much more than just call games, though, as this statement from MLB commissioner Rob Manfred illustrates:

That Buck O’Neil Lifetime Achievement Award was a significant one for Garagiola, especially considering that O’Neil was a long-time friend of his. He gave a great interview full of stories to MLB.com’s Richard Justice in 2014 around that award, including a discussion of how he wound up meeting President Ford and staying at the White House to watch 1976 election returns. That fulfilled one of his lifelong dreams, as this MLB Network tribute video illustrates:

That’s just one of the incredible experiences Garagiola had outside baseball. He also served as a guest host on Johnny Carson’s The Tonight Show, including during the only live appearance on that show by two Beatles during the group’s existence (it featured John Lennon and Paul McCartney, and Garagiola later joked that “I might have made them feel uncomfortable when they saw how much hair I had). He also was a regular co-host on Today and a host of several game shows, including To Tell The Truth. His books, including debut Baseball Is A Funny Game, were highly popular, and his work with the Baseball Assistance Team, the National Spit Tobacco Education Program, and various children’s charities was important. However, it’s his baseball broadcasting career that he may be most remembered for, and Noble’s piece illustrates why he was so popular as a broadcaster:

Much of what Garagiola added to broadcasts and telecasts was delivered in a folksy, unaffected way. He made stories the stars of what he shared. His commentary rarely was judgmental; neither he nor his contemporaries questioned execution of a play or managers’ decisions. Instead, his audiences were regaled with tales of Weaver’s antics, Veeck’s wooden-leg ashtray, Lasorda’s waistline, Casey’s lingo, Gamble’s afro, clubhouse shenanigans and, of course, anything involving his childhood chum. Garagiola was drawn to the game’s characters and sought out their stories.

“I couldn’t share my own experiences,” he said. “I didn’t have that many. They don’t want to hear what it’s like to warm up a guy in the bullpen. … I had a career that I’m proud of. But I didn’t do much.”

Contrary to his claims, Garagiola had plenty of notable moments as a player too (where he was better than he often claimed, especially by today’s advanced stats; his career batting average was .257, but he posted a career on-base percentage of .355), including helping the Cardinals to win the 1946 World Series with a .316 batting average in 19 at-bats and four starts. His most memorable work came in the broadcast booth, though, and he’ll be long-remembered for it.