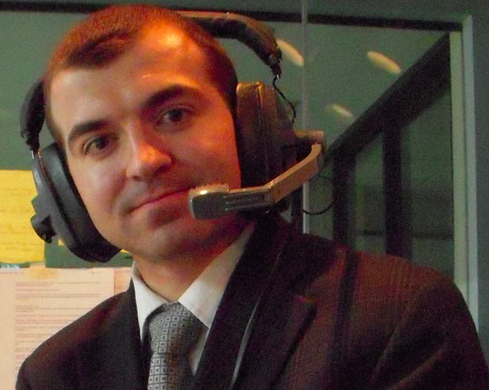 Green Bay upset Valparaiso 99-92 in overtime in a wild Horizon League semifinal on Monday night.  Valpo had tied the game at the end of regulation on a full court hail mary inbounds heave, but the Phoenix were able to rebound and emerge victorious in an extra frame.

What happened on the court was only a fraction of the wild action, though, as Green Bay radio announcer Matt Menzl was temporarily dismissed in the second half.

Update: Here’s the audio of Menzl’s ejection, via Scott Venci at The Green Bay Press-Gazette.

And how it transpired on the television broadcast:

And here’s how it looked in real time via some tweets from people at the game.

Looks like the official is trying to get the Green Bay announcer thrown out here in the Horizon League semifinal. Isn't moving yet.

This would be a major problem for the folks listening at home because Menzl was apparently doing the game solo.  So after Menzel was tossed, Oakland announcer Neal Ruhl stepped in and picked up the microphone.

He's gone. Oakland's @nealruhl steps in to call the rest of the game for the Green Bay radio network.

Thankfully, cooler heads must have prevailed, and Menzl was apparently allowed to return after being sent away for a brief time according to the team’s Twitter account:

For those curious, the officials were displeased with the gestures of our radio talent. Asked him to leave, he has since returned.

The Green Bay announcer has been reinstated and is back on the air. (After being sent to his room for a few minutes. Or something like that)

After the game, Menzl took to Twitter to explain the situation:

For the record, all a misunderstanding tonight. Ref said I waved him off and without warning said he wanted me removed. I was let back in.

And here’s what he told the Press-Gazette:

“I talk with my hands,” Menzl said. “I was trying to describe that we had two guys fighting for the ball, and he took it as I waved him off, like saying that’s a horrible call.

“At first he gave me a warning. Then two seconds later said, ‘I want this guy removed and I won’t start the game until he gets removed.’”

Menzl had to hand over his headset to an Oakland play-by-play announcer and went into the tunnel, where he explained the situation to UWGB athletic director Mary Ellen Gillespie and Horizon League spokesman Bill Potter.

Potter told Menzl to go back and that they’d deal with it.

You mean a college basketball referee with an extremely short fuse and massive ego blew a situation completely out of proportion and acted impulsively in an insane power trip?  Well, I never…