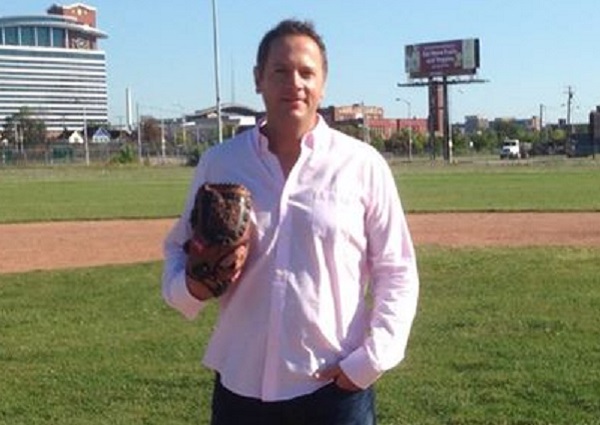 You may remember Fox analyst C.J. Nitkowski for his piece that MLB players “overwhelmingly support” Jonathan Papelbon choking teammate Bryce Harper, or for his yelling on Twitter at critics of his tolerance for assault to “take that soft PC nonsense somewhere else,” or for his tweet and subsequent blog post earlier this month that people who didn’t play professional sports shouldn’t analyze how players react on the field. Now, he’s in the news again for mocking a woman who was looking at her phone during a baseball game, getting super defensive about it when ESPN’s Keith Law and others called him out, and eventually blocking Law and writing a long screed against him with a headline of “ESPN’s Keith Law’s Attempt to Defame Me Highlights Dangers of Social Media Overreactions.” First off, here’s Nitkowski’s initial tweet:

Your parents paid a lot of money for that seat… pic.twitter.com/yXQAcLzo1C

Definitely not possible any woman could buy her own ticket. https://t.co/3gYpPUdJiL

The further back and forth:

@keithlaw C'mon Keith. You're trying paint this as a sexist tweet? If so, not fair man. Disappointed you would try to do that to me.

@CJNitkowski disappointed you'd shame a woman (whom you highlighted in color) for doing something that bothers nobody at all.

And the highlights of Nitkowski’s long screed:

Keith has a huge Twitter presence with over 450,000 followers. He has strong social media influence. He was way off in his assumption. Who outside of the trolls said anything about women?

His tweet didn’t bother me despite the fact that he was taking this in a direction that had no validity. What did bother me was that he quote tweeted me, which means he commented in front of the retweet so that all of his followers could see his comments and then my tweet. He didn’t want to share his opinion with me and make me reconsider what I tweeted or start constructive dialogue, he wanted nearly a half a million people to believe that I was being sexist.

It was unfair and I addressed it with him. He didn’t relent.

I used color splash on the Aviary app to highlight the person in the front row. Color splash turns a photo black and white and then uses the original color anywhere you tell it to. I highlighted our front row fan, to simply show what that person was doing at the time of Jimmy Rollins double. The colors are all original, I didn’t change the hat to pink, it was pink. It seems Keith felt the color was also sexist.

The picture highlighted gender? I don’t see a face, I don’t see a body. I see long hair and pink hat. Oh, boys are not allowed to have long hair or wear pink hats? OK, got it. Which one of us is stereotyping gender?

You can make something out of nothing if you try hard enough and that is what Keith did here. Safe to say he is oversensitive to sexism, especially in the sport that he covers. So instead of being objective, he was blinded by he his likely hatred for sexists athletes and quickly tried to throw me in that group and under the bus.

It wasn’t right and it certainly wasn’t fair. The attempt to defame me was a huge disappointment, especially when it came from another analyst in this business. None of what Keith insinuated is true.

I can appreciate people standing up for one another and taking on a cause that does not directly effect them. But we have to be better. Trigger phrases like sexist, racist or homophobe are hot button topics that are difficult to defend without getting shouted down. We throw these terms around way too loosely.

He then goes on to opine about how “we are doing the people affected by real bigotry an injustice.” Nitkowski might want to take his “only experts should opine” perspective to the field of media law, though, as Law’s comments here are highly, highly unlikely to constitute defamation (in fact, Law does not call Nitkowski sexist, but merely says he’s “disappointed you’d shame a woman,” which is an opinion it would be difficult to sue him for). This is just the latest case of him fighting with people on Twitter and trying to paint his words in a more favorable context, though, which also fits with what he did earlier this month around a “Wish there was a place where people who couldn’t play professional sports could tell professional sports people how to play. Oh, Hi Twitter!” tweet he later defended on The Jay And Dan Podcast (after making fun of beer nerds):

Nitkowski’s penchant for Twitter wars and outspoken commentary is certainly getting him plenty of attention. Maybe one day, he’ll be known as more than just the guy Pete Rose photobombed. It seems unlikely he’ll have further wars with Law, though, as Nitkowski ended his screed by saying he’d blocked him.

Be careful what you say and post about others online. And if you really care about a subject, a serious one, address the person with the respect you want back from them. Screaming, yelling and quote tweeting lies doesn’t solve anything and it certainly doesn’t bring us a place of civil discourse, which is the only place where anything gets resolved.

Despite the absence of an apology you’re forgiven Keith.

Also, I have to block you on Twitter since you wrongly took one of my tweets and tried to smear my name to 450,000 people. I’ll miss you. No hard feelings.

We’ll see who Nitkowski decides to tangle with next.