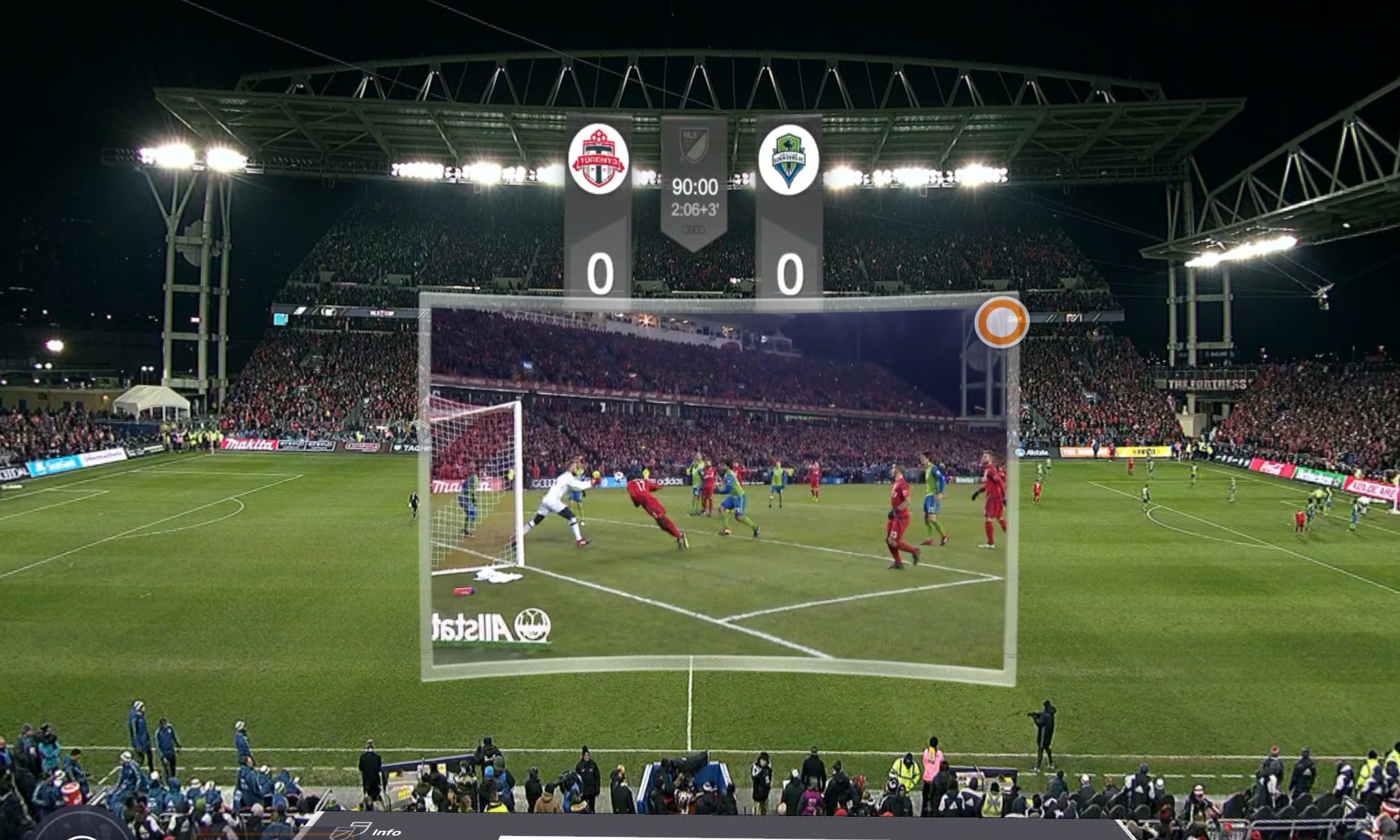 As part of their MLS Cup coverage, Fox made the MLS Cup Final available in virtual reality for the first time ever. An emerging market over the past couple years, virtual reality is becoming more and more common in how we consume content, especially in sports.

Fox, in association with virtual reality company LiveLike, has teamed up to launch the Fox Sports VR app. In the past, LiveLike and Fox have broadcast the occasional college football and soccer game in virtual reality, and their latest test would be in Toronto for the MLS Cup.

Never experiencing virtual reality before, I got a headset and watched the first half of Toronto vs. Seattle to see what the appeal was.

It’s important to note that you don’t need a headset to enjoy the Fox Sports VR app. You do need to be signed in via Fox Sports Go through your cable or satellite provider, but you can use your iOS or Android device on its own to watch the game. The app has demos of previous games so if you are interested but are not sure about putting down the money for a headset, try that first. But if you want the full experience, definitely look into getting a headset and go off into another world.

For the MLS Cup, Fox had four cameras in place that you could choose from. Unfortunately, one of the goal line cameras failed to work Saturday night and it was on the end that would unfortunately be behind the goal that had the penalty kick shootout but there were cameras on each side of the pitch.

I very much preferred the goal line camera. Midfield cams are great because you can see the entire pitch and see where everyone is at all times but that to me is more appropriate for analysis and that isn’t really the purpose of virtual reality for the average viewer. That, and the cameras are so far away that it’s very tough to figure out who is who on the pitch, even with a 5.5 inch phone screen and my 20/20 vision. The goal line cam is right on the pitch surface and is close to the action in on goal. You will need to switch in between goals (if both are working) so you don’t miss anything but this is the closest to having a front row seat. And you can still see the TV feed above. 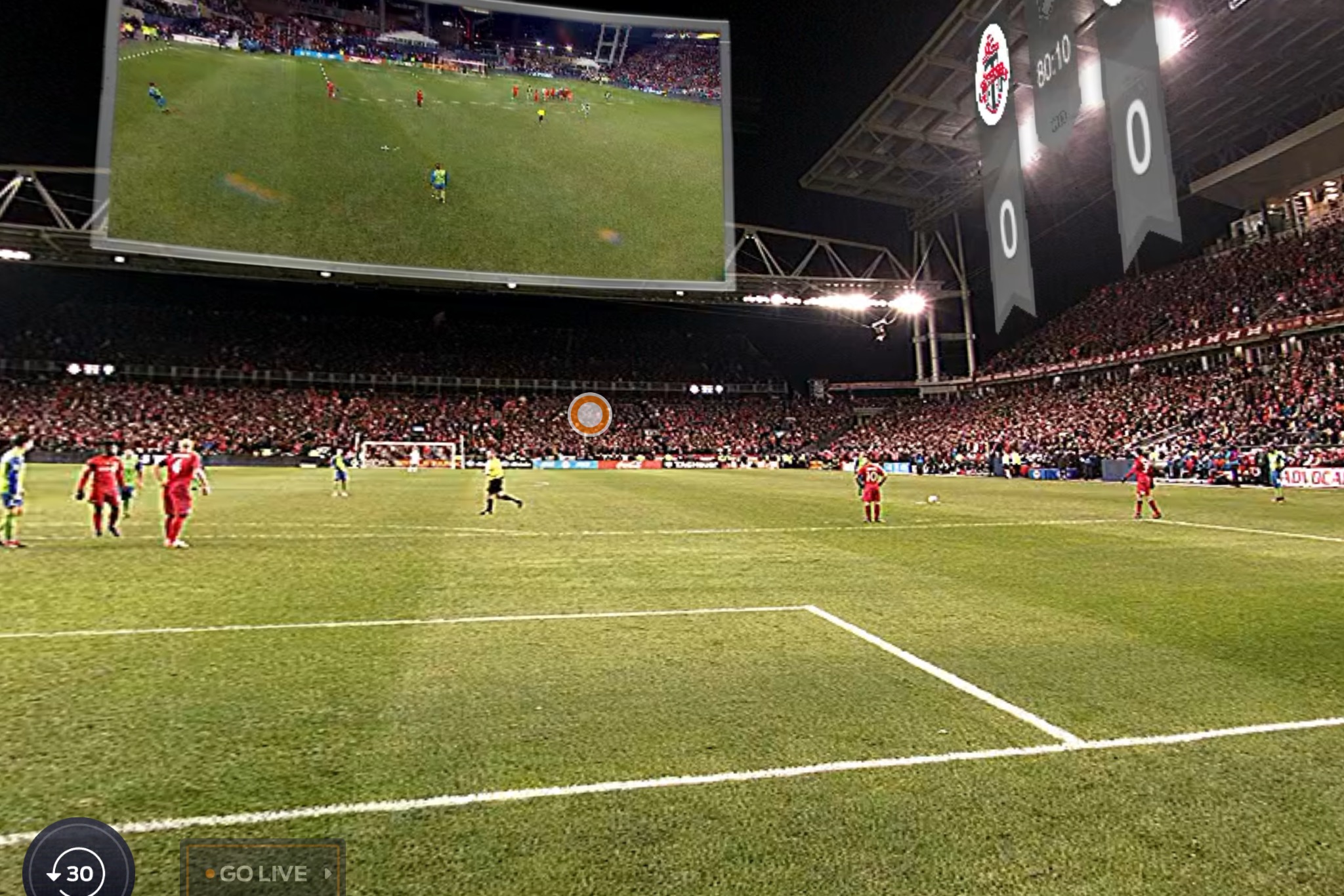 Regardless of what camera angle you use, you get the viewpoint that you are in a virtual suite. Below the action, you have access to a panel with updated stats and player info. The entire display is 360 degrees so when you look behind you, you will see an animated MLS Cup trophy, Audi R8 (Audi was a sponsor) and the visualization that you are in a suite. 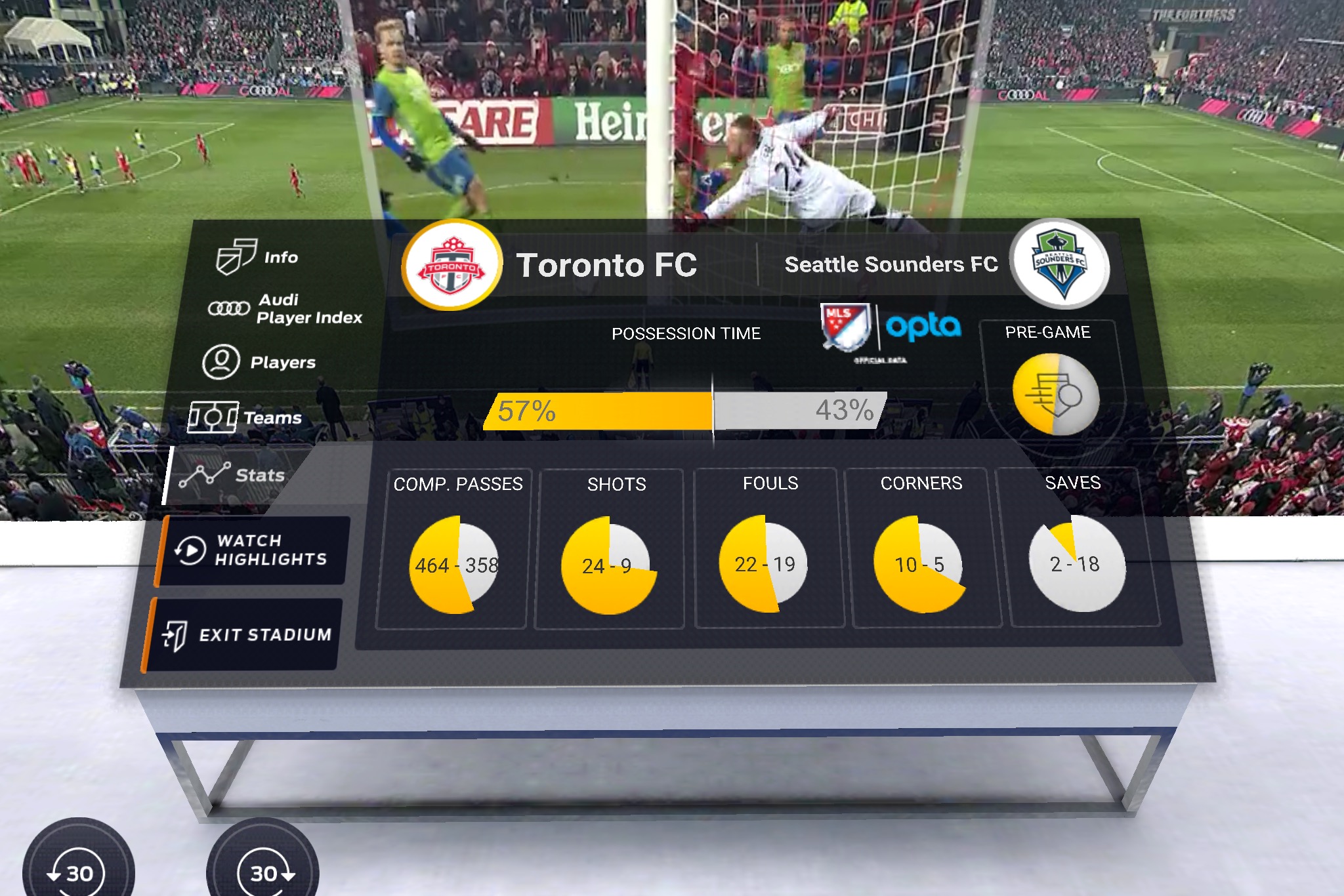 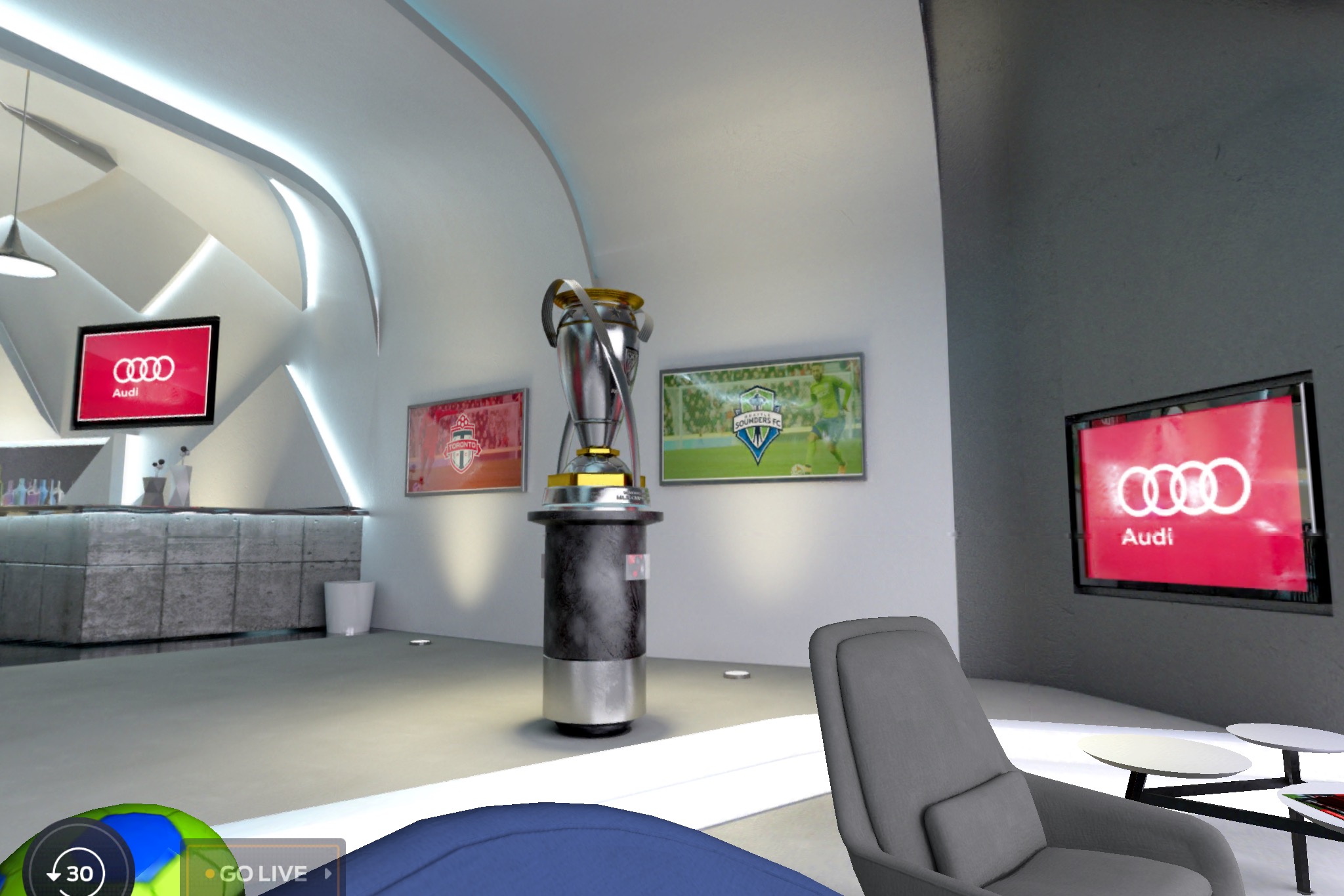 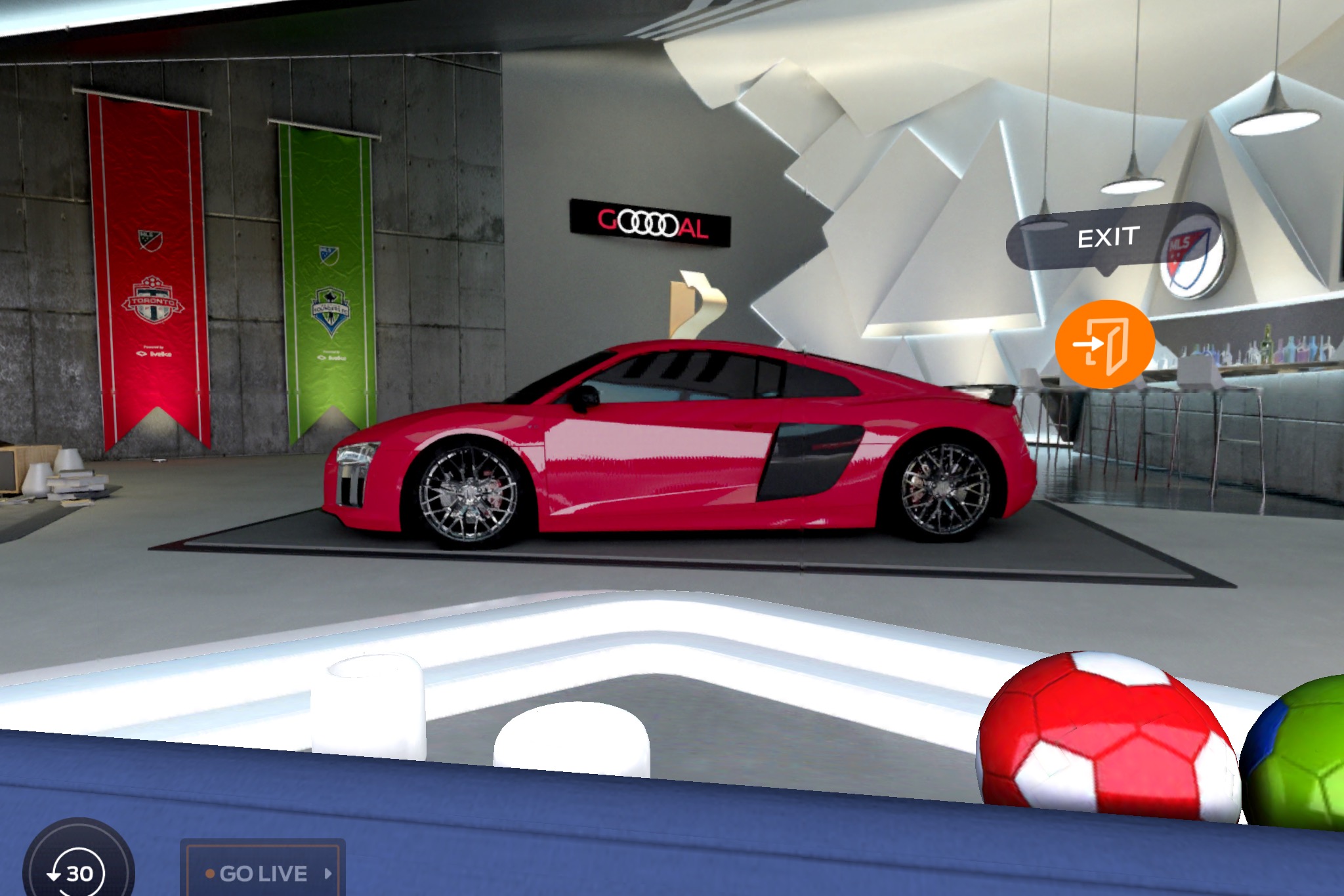 I was very impressed that the game action in the app was just about 30-45 seconds behind live action than the Fox broadcast. I was expecting a delay of about double that, but at 30-45 seconds, that is about the same when one would normally stream a sporting event compared to the TV broadcast.

Despite the short delay, there were some areas of improvement that Fox and LiveLike could implement. The app, as well as virtual reality in itself, is new and there are bound to be bugs and improvements to be made. For the MLS Cup, Fox added the ability to rewind by 30 second intervals for up to a half hour behind the live broadcast. And you can expect more improvements to the app as time goes on.

Two easy areas of improvement were within the info panel. One, for some strange reason, the height and weight of the players were in metric. Not to go all “Murica” on everyone, but it just seemed weird that the height and weight was in meters and kilograms instead of feet and pounds for an app designed by an American network for an American audience. Two, the panel of players for each team was in position order and made things very disorganized. Putting players in order beginning with starters, substitutes and the rest would help viewers identify players out on the pitch a lot easier.

There are other things that you can miss out on when watching a game in virtual reality that Fox and LiveLike can’t really control. For one thing, your phone heats up after about 15 minutes inside a VR headset so you need to watch out about your phone overheating. That seems to be a universal problem with virtual reality headsets, but it makes sense. Your phone is using a high performance app and you have it stored in a confined space. Yes, I wouldn’t be shocked if my phone got hot after a while.

Another thing you miss out on is interacting on social media. Wearing a virtual reality headset with earphones does take you away from reality and it’s a great experience. But that also makes posting on social media near impossible. So if you are someone who loves to be on social media while watching a sporting event, you kind of have to choose one or the other.