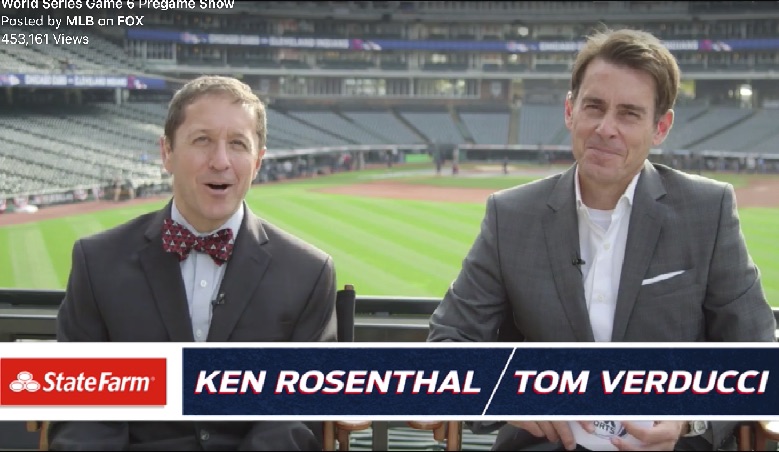 Baseball fans checking Facebook on their computers or mobile devices before each game of the 2016 World Series may have been getting a look at the future with Fox Sports’ “Live @ The World Series” pregame show streaming on Facebook Live. A joint venture between Fox Sports and Sports Illustrated, the 20-minute program is something of a test run for live pregame content to be shown before other big sporting events that Fox will broadcast, such as the Super Bowl and likely the World Cup.

Hosted by reporters Ken Rosenthal and Tom Verducci, “Live @ The World Series” is produced by the Fox Sports team. As a result, the majority of the live show includes segments with MLB on Fox’s studio team of Alex Rodriguez, Frank Thomas and Kevin Burkhardt, in addition to broadcasters Joe Buck and John Smoltz. Sports Illustrated reporters also provide pre-recorded segments for the show, notably video essays by Will Leitch.

Here is the show that streamed on Facebook Live before Tuesday’s World Series Game 6:

After the live stream, the content gets a longer shelf life as Fox Sports cuts the show into smaller clips that can be shown again on Facebook, posted to YouTube and Twitter, as well as the Fox Sports and Sports Illustrated websites. According to Digiday, the streaming broadcasts have drawn between 360,000 and 660,000 total views, with most of that audience viewing through Facebook. Clips posted to Twitter have averaged 20,000 to 30,000 views per show. Tuesday’s show drew 453,753 on Facebook Live.

In addition to providing programming for fans who may not have access to their televisions (and MLB on Fox‘s own televised pregame show) during the late afternoon prior to each World Series game, the Facebook Live streaming broadcast allows Fox Sports and Sports Illustrated to expand upon their respective content.

“The value of it to me is really about giving the truly passionate fan an even deeper understanding of what’s going on and being able to extend the things that both of the brands do already,” SI Group digital editor Mark McClusky told Awful Announcing’s Andrew Bucholtz. “The fact that we can have Ken and Tom talking about things, the fact that we can tonight bring in Joe Buck and John Smoltz and have that level of insight, to me, it’s really exciting.”

What change helped get Josh Tomlin back on track? @Ken_Rosenthal & Tom Verducci discuss.

As McClusky points out, the other key advantage that “Live @ The World Series” enjoys over its broadcast counterpart is interactivity with viewers. Facebook users can submit questions to Rosenthal and Verducci in real time and have them answered during the streaming telecast.

“Watching the show, the thing that’s really powerful about it is the potential for interactivity,” McClusky added. “You’ve got Tom and Ken talking about the game, breaking things down with their storylines, but then you’ve got people on Facebook asking them questions that a producer can then bring straight to them in real time. It’s not broadcast, it’s not one-way, it’s a conversation they’re having with fans that are interested in this, and that’s a super-powerful change across the whole business.

You can view “Live @ The World Series” through the MLB on Fox Facebook page. before Wednesday’s World Series Game 7. Will it draw the highest viewership of the seven shows Fox Sports and Sports Illustrated have streamed on Facebook Live? Fox Sports and Sports Illustrated are also streaming pregame shows for NFL and college football coverage, and we’ll be sure to see more such programs before big sporting events on Fox.