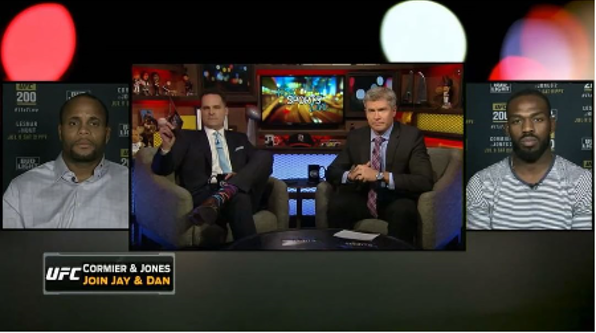 The transition from news and highlights show Fox Sports Live 2.0 to late-night show Fox Sports Live With Jay And Dan has worked pretty well for Fox on many fronts, including the ratings front. However, because much of FSL 3.0 is pre-taped (including the interviews that make up a substantial portion of each show), it’s tougher for the show to react to late-breaking news or events that would alter an interview the way FSL 2.0 was able to.

That was particularly obvious Wednesday night when news came out that Jon “Bones” Jones was off the UFC 200 card following a potential doping violation; the @FoxSportsLive Twitter account and other Fox social accounts had been promoting a FSL interview with Jones and opponent Daniel Cormier on their episode starting at 12:30 a.m. Eastern Thursday all day, but when that time rolled around, it was a Fox Sports Live clip show that aired instead. That led to some Twitter backlash:

@foxsportslive What happened to the interview with Jones?

@foxsportslive No coverage of the UFC News?

Well, this becomes interesting with the Jones news….. https://t.co/8aIJf8Azgn

A big problem when you give up covering news: ESPN dominating Jon Jones story right now; FS1 has no apparatus to cover their own property.

Funnily enough, the clip show even had some segments that seemed topical in retrospect, such as a bit on UFC president Dana White glowering at Conor McGregor’s empty chair and frequently mentioning him (the last big fight that went awry), and even more so, the lead-up to an eSports piece co-host Jay Onrait introduced with “When we changed the format of this show for the third time, people said we wouldn’t be able to cover news like we used to.” Apropos indeed.

A Fox spokesperson told Awful Announcing Thursday the call to axe the Jones-Cormier interview and that day’s FSL and replace it with a clip show was made because of the timing of the announcement, and because the comments from Jones and Cormier about the fight weren’t as valuable with the fight called off.

“Given that the announcement came so close to the show, it was an editorial decision that the interview had become dated and that pulling it made the most sense.”

We can still see one clip of this interview, though; Cormier’s reaction to Jones’ comments (from a Fox Sports Live episode last week) of being “balls deep in his head” still lives on the Fox Sports Live Twitter and Instagram pages.

It’s highly unfortunate that Fox had to pull this, as there was a lot of potential in this interview. Previous dual interviews of UFC fighters on Fox Sports Live had produced some great stuff, such as the McGregor – Nate Diaz one (which has 243,000 views on YouTube, well ahead of most of their clips) that even created a follow-up segment on gazelle knowledge), and Jones and Cormier had both proven entertaining in their solo appearances on the show.

Fox Sports Live’s willingness to not take itself too seriously can provide a great platform for non-standard interviews, and there was every indication that this could be one. In fact, the first couple of minutes of this week’s Jay and Dan Podcast (mature language warning) were devoted to talking about how good this interview was and how it stood out from the other interviews Jones and Cormier had done (3:55 to 5:30):

The move to axe this interview (and by extension, the episode) for a clip show makes some sense, though. With Wednesday’s Jones news, watching him and Cormier talk about a fight that now isn’t going to happen would have been odd, and probably would have provoked more viewer backlash than the few tweets they got asking what happened to the interview.

FSL 3.0 also is very comedy-focused and not really about serious sports news, so it wouldn’t have fit with viewers’ expectations to suddenly air “a very special episode” devoted to covering the Jones news seriously. (And there’s only so much to talk about there, especially on short notice and especially with the few details that have emerged so far.) Fox probably handled this about right given their programming lineup at the moment.

However, this does illustrate one area where FSL 2.0 had a valuable edge over FSL 3.0. Like ESPN’s SportsCenter (which did a lot on the Jones news Wednesday night), FSL 2.0 was able to quickly pivot and cover breaking sports news, often with interviews with analysts and insiders. FSL 3.0 has made it clear they’re not anywhere near as focused on the news or highlights of the day, and while that works in general and has produced big ratings dividends (FSL averaged 84,000 viewers over three weeks last month, a big gain from the 55,208 it pulled in its first month, a gain over other shows on the network such as Speak For Yourself and The Herd, and even a gain over the NASCAR-aided 77,801 the last month of FSL 2.0 received) and lowered production costs, it does cause some issues when breaking news happens, especially for a property they cover extensively.

A year ago, Fox Sports Live could have had extensive coverage of the developing Jones situation, likely with the help of an insider like Ariel Helwani. Wednesday, they had a clip show. That doesn’t necessarily indict the decision to move from FSL 2.0 to FSL 3.0, which as mentioned above, has found some success overall.

It does make it more clear that Fox isn’t looking to compete with ESPN on breaking news and analysis, though, at least when it comes to their evening TV lineup.