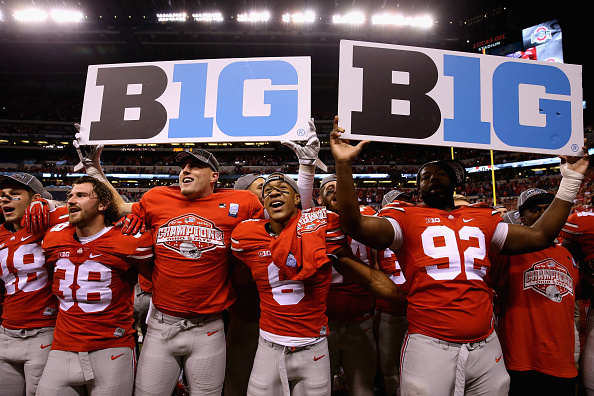 If there’s one thing we’ve learned in the recent proliferation of 24/7 cable sports networks and the increased competition for ESPN it is this – live sports rights trumps all.  It’s the central reason why ESPN has and will continue to have a huge advantage over upstarts like NBCSN, CBSSN, and FS1.  And it’s a reason why spending millions of dollars on loud personality-driven programming is a questionable strategy.

Sports fans are driven to your network by one thing and one thing only – live sports.

The best thing FS1 has going for it in its quest to topple ESPN is it’s live sports portfolio which has more top tier programming than its rivals.  FS1 has NASCAR, MLB Playoff games, UFC, and other key events.  But now they may be on the verge of adding perhaps their biggest fish yet.

For months now speculation has been rampant that Fox would be able to grab a slice of the Big Ten pie away from ESPN with their part-ownership in Big Ten Network and their desire to acquire more popular live sports rights.  Fox also already has a relationship with the conference thanks to being the television home of the Big Ten Championship Game.  With the Big Ten one of the last prizes up for bidding for this decade, it was easy to see that this was Fox’s chance to make a big move.

According to SBJ‘s John Ourand, that’s exactly what’s going to happen.  The outlet reports Fox is ready to add 25 football games and 50 basketball games to its portfolio for a cool $250 million per year:

Fox is close to signing a deal that gives it half of the Big Ten’s available media rights package, according to several sources. Deal terms still are flexible – both in terms of money and rights. However, the two sides have agreed on basic terms that will give Fox the rights to around 25 football games and 50 basketball games that it will carry on both the broadcast channel and FS1 starting in the fall of ’17. The deal runs six years and could cost Fox as much as $250M per year, depending on the amount of rights the Big Ten conference puts in its second package.

In spite of the price tag, this is really a no-brainer for Fox Sports and for FS1.  Yes, the network had Pac 12 and Big 12 games on which to build its foundation.  But the Big Ten and the ratings that come with the Ohio States and Michigans of the world is another level entirely.  (And Rutgers, I guess?  Yay Rutgers.)

There’s another half of the Big Ten’s package to go, and odds are ESPN will want to pick it up and share with Fox in the same way they do with these other conferences.  The questions for Fox are which games the network gets and how lucrative this package might be – do they get the first choice each week and can they put big drawing teams on FS1 to draw more viewers for the cable network (and eventually demand higher subscription fees to create more revenue.

The question for Big Ten fans is whether or not they can withstand games on Fox if noted conference troll Clay Travis is anywhere near the broadcasts.  They just might be longing for the days of Mark May.