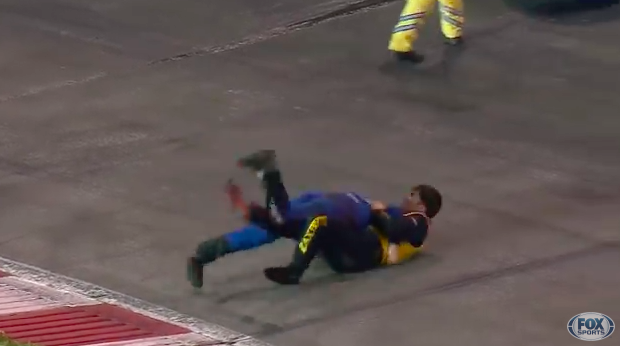 For a long time now, one of the go-to memes for internet sports blogs has been dubbing commentary from legendary WWE announcer Jim Ross over various slobberknocking events in the sports world.

The NASCAR truck series fight between John Wes Townley and Spencer Gallagher over the weekend (well, if you could call it a fight) was no exception.  Kudos to this YouTube user for finding Ross’ “Master of the DDT” line for Townley’s takedown.

Well, thankfully we no longer have to depend on dubbed internet memes because Fox Sports got the genuine article, the real Jim Ross, to provide original commentary over the NASCAR donnybrook.  Ross even makes a couple Zaxby’s chicken jokes as he throws in some of his classic wrestling play by play.

“Let him go he’s got a family for God’s sake, and they love chicken!”

What Fox needs to do now is have Ross attend all of their major sports broadcasts just in case a fight like this breaks out so he can do live play by play.  He could form quite the tag team with Mike Pereira.