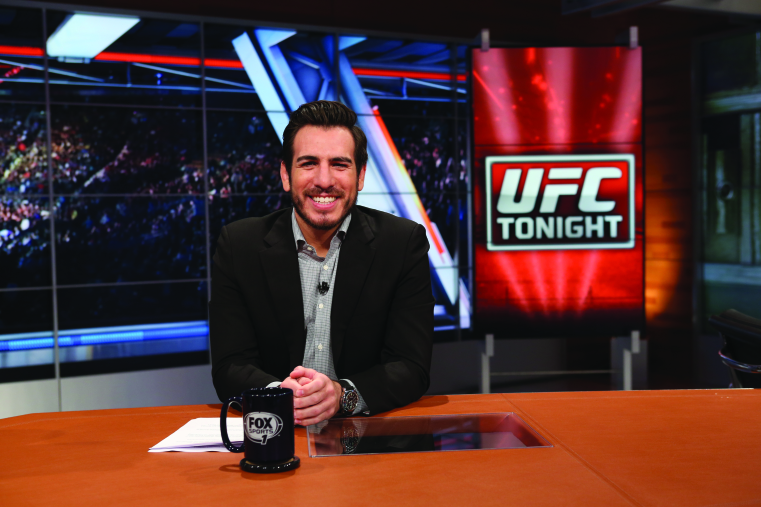 Plagiarism is one of the most serious offenses in media, but one that somehow keeps popping up in both the regular media and the sports media, from ESPN to CBS Fort Worth to Runner’s World to The Detroit Free Press. Those cases all involved plagiarism in written articles, though, and it’s rarer to see on-air talent accused of plagiarism, but that’s what’s happened with former MMA fighter and current Fox MMA analyst Kenny Florian.

(Update: Fox announced Saturday that Florian has been suspended indefinitely:

Florian was scheduled to work Sunday’s UFC coverage from Boston on FS1, and now won’t be appearing on it.)

As pointed out by The Naked Gambler’s Twitter account, Florian’s analysis of Sunday’s T.J. Dillashaw-Dominick Cruz bantamweight title bout was lifted almost word-for-word from boxing analyst Lee Wylie‘s Dec. 3 breakdown of 1940s boxer Willie Pep. Combat Sports Law has a good breakdown of all of the similarities between the two pieces. Here’s one of their many examples: 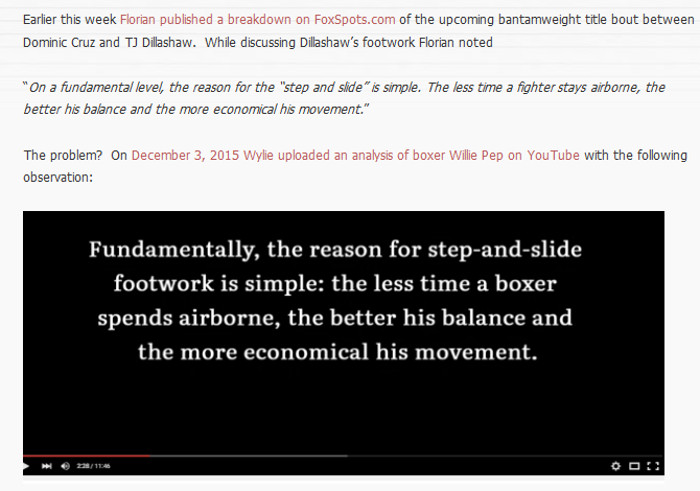 Yeah, that’s a big problem, especially when you consider that there are many more examples of Wylie’s analysis in that piece being used almost word-for-word by Florian. Wylie wasn’t thrilled about it on Twitter:

I think somebody has been watching my Willie Pep video… https://t.co/QlYbwqitjB

Nope. He gets paid for his work. I don't. https://t.co/uD4PCVRwlI

There are bound to be some similarities when it comes to fight analysis, but this is outrageous.

And Twitter user Suzanne Davis had a great response:

Y'all, stop giving him a hard time.

Kenny Florian has given us a bunch of classics over the years. Respect. pic.twitter.com/iyFpnljgN2

Fox eventually appended an editor’s note to the top of Florian’s piece:

(Editor’s Note: Language in this breakdown borrows from written material in a video of an in-depth look at the defensive boxing prowess of Willie Pep by TheFightCity.com boxing analyst Lee Wylie. The original version of this story did not contain this credit. We regret the oversight.)

Plagiarism is more than just an “oversight,” though, especially when the accusations are this substantial and credible. This kind of response doesn’t seem like they’re taking it very seriously. As Poynter’s Craig Silverman and Kelly McBride note in an excellent “How to handle plagiarism and fabrication allegations” guide from 2012, plagiarism and fabrication should carry severe consequences, and it should also cause an examination of the subject’s previous work for other incidents of plagiarism:

In a case of verified fabrication, suspension is the minimal response. Termination is a more fitting punishment.

…As you verify instances of plagiarism or fabrication, announce the findings in an editor’s note, apologize to readers and anyone specifically affected; explain the suspension and ongoing examination of previous work.

How did Florian respond here? Well, he first offered an explanation/somewhat apology to The Naked Gambler via DM:

Florian then offered a “why are the rest of you all mad?” publicly on Twitter and said he’d explain on an upcoming podcast:

For what it’s worth, Wylie seems to have accepted Florian’s apology.

Show me someone who hasn't made a mistake, and I'll show you a liar. It's not the end of the world. https://t.co/q1tItgwUaI

This is still a big problem, though, and one that casts a shadow over Florian’s work. His defense of “I got my notes mixed up” is one commonly used by plagiarists, and it’s not a defense; anyone in media should be well aware of how important it is to delineate your own work from the work of others. It’s not as if he borrowed only a line or a turn of phrase from Wylie, either; while that would still be problematic, it would make his defense somewhat more believable.

This was taking almost an entire piece and repeating it almost word-for-word, and it would seem incredibly difficult to do that by accident. Moreover, this may not be an isolated incident: The Naked Gambler noted that Fight Network analyst Robin Black has previously accused Florian of copying one of his bits:

That one’s not quite as convincing or as problematic (how original are “look into the future glasses,” really?), but we’ll see if more accusations pop up. If Florian’s defense of regularly taking notes and not properly indicating what comes from where is accurate, he may have done that in other cases too. It’s vital that he realize going forward how unacceptable taking others’ analysis without attribution is, and that his bosses at Fox get that message through to him. They need to take this seriously; this sort of behavior’s unacceptable, and they need to indicate that to their employees to prevent further such incidents. Hopefully, this suspension will accomplish that.