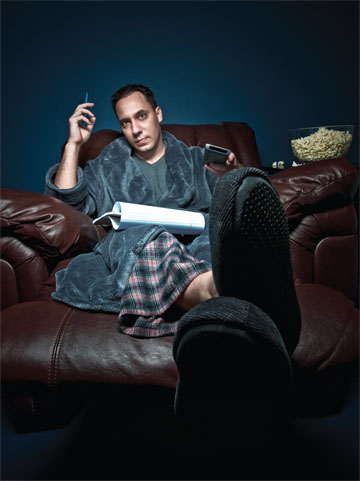 The sports media world is known for some odd career arcs, but Steve Carbone’s might be one of the most unusual. He got his start as a play-by-play announcer for the basketball team at Loyola Marymount University and a regular caller to Jim Rome’s show, wrote a college thesis on Rome, went to work for him for a year and a half, left to work as  a L.A. radio host and a writer for a colleague’s subscription-based sports commentary site, and then got fired by his radio station (KXTA 1150) for swearing in a column on that other site. That was in 2002, and it prompted an unusual career shift for Carbone: becoming a top reality TV commentator, and one who’s successfully spoiled shows like The Bachelor. (That takes more talent than being on The Bachelor: sorry, Jesse Palmer.) From Jon Caramanica of The New York Times, here’s how Carbone’s sports talk firing led to his start in the reality-TV world:

A few months later, he found a new object for his ravenous cultural interest: “Joe Millionaire,” one of the first stunt reality shows, and ripe for mockery. He began sending caustic and humorous weekly emails about the show to friends, who forwarded them on, earning Mr. Carbone a reliable audience.

To make money, he took a job as a mortgage broker, and later worked with his father in the home bedding industry, all the time working part-time in sports radio. The email newsletter became RealitySteve.com in November 2003, but Mr. Carbone earned no money from it. That was still the case when he received his first spoiler tip [in 2009]: that Season 13 bachelor Jason Mesnick had dumped Melissa Rycroft, the woman he’d proposed to on the season finale, and reunited with Molly Malaney, his second choice.

Mr. Carbone posted the information, and suddenly he was an authority. Within a year, he was regularly receiving tips, enough that with some elbow grease he could piece together the arc of a season before it began running. In August 2011 he was able to quit his other jobs. The people who provide him with scoops, Mr. Carbone said, aren’t unlike the person he was when he used to call Mr. Rome’s show: “They just wanted to feel a part of it, wanted to feel like they helped out.”

As this 2011 D Magazine profile mentions, it was a gradual transition for Carbone. He did further sports radio stints with Dallas’ The Ticket 1310 from 2006 to 2008, and also held those other jobs in mortgages and linen while blogging about reality TV, but the 2009 spoiler tip he got helped him turn reality TV into a full career.  Remarkably, according to Carbone, he’s managing to make six figures from writing about reality TV. That’s thanks partly to the sources he’s been able to cultivate and the information he’s been able to get:

[F]or the last four years, Mr. Carbone has been making a habit of spoiling the season for “The Bachelor” and its spinoffs in their entirety before they even begin airing, making him the foremost authority on one of reality TV’s signature franchises — and also a thorn in the side of its producers and network.

“I can’t believe I get this much information, every season. I still think it’s weird that I get it,” Mr. Carbone, 40, said in September at a Chili’s 10 minutes from his modest home [in Frisco, TX], where he lives with his dog, Maddie.

RealitySteve.com is combination love letter, cruel tease and cat-and-mouse game — one man working against a huge operation. Mr. Carbone’s writing is characterized by equal parts skepticism and glee: The site’s header reads, “My slanted, sophomoric, and skewed view on the world of reality television.”

It’s a small outfit — he employs a webmaster who also organizes his ad sales, but otherwise, all the labor is Mr. Carbone’s, earning him what he terms a “comfortable” six-figure income.

So, sports media members, take note: there may be other possible career paths out there for you!