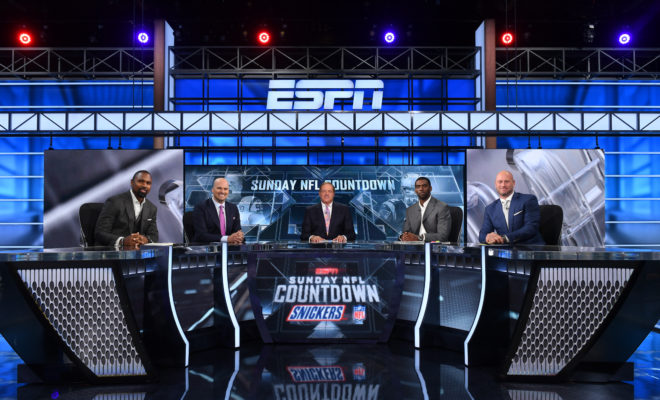 ESPN has found success taking College GameDay on the road, something they’ve tried to replicate with SportsCenter and other big events such as the NFL Draft, the NBA Finals and the Mayweather-Pacquiao fight. Now, they’ll be airing Sunday NFL Countdown on the road ahead of a regular-season game for the first time in 31 years, and they’re doing so from a different country; Mexico, next Sunday, ahead of the Monday, Nov. 21 game in Mexico City between the Oakland Raiders and the Houston Texans. Here’s more on that from the Associated Press:

“Sunday NFL Countdown” will move to Mexico City to proceed the Monday night game on Nov. 21 at Azteca Stadium between the Texans and Raiders. It’s the first NFL game in Mexico that counts in 11 years.

“NFL Countdown” on the day before the game will originate from Chapultepec Park, site of the NFL Fan Fest for the match. It will be hosted, as usual, by Chris Berman, who also will co-host with Suzy Kolber on a two-hour “Monday Night Countdown” from Azteca, with two-time Super Bowl winner Jim Plunkett as a guest.

ESPN plans 10 hours of studio coverage from Mexico City, with several other shows originating from there.

“The NFL’s return to Mexico on ‘Monday Night Football’ is a signature event of the season, and the perfect opportunity for us to bring ‘Sunday NFL Countdown’ on the road for the first time,” said Seth Markman, ESPN senior coordinating producer for NFL studio shows.

Here’s more from ESPN on what shows will originate from Mexico City and who will be there:

Other ESPN shows originating from Mexico City include Sunday and Monday morning editions of Hannah Storm’s SportsCenter Face to Face, SportsCenter on the Road with Sage Steele, and Monday’s NFL Live with Trey Wingo and analysts Herm Edwards and Darren Woodson.

This will certainly give ESPN’s pre-game shows and other studio programming a bit of a different feel. We’ll see if it can help to turn around the ratings declines they’ve faced for their pre-game shows this year. As McDonough noted earlier this year, too, the timing of this game’s good: “It’ll be early in the season, before there are any walls we have to get over.”