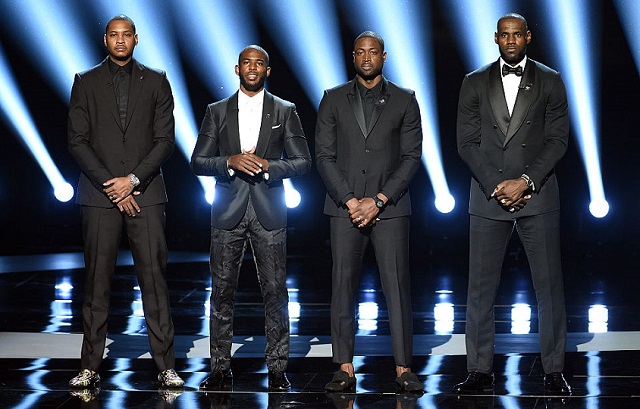 In sports media, there’s no easier target to poke fun at than the ESPYs. OK, maybe aside from First Take or the new Speak for Yourself. The ESPYs represent all the self-glorification and self-indulgence that is the self-proclaimed worldwide leader in sports at its most self-inflated point. A night created by ESPN for ESPN about ESPN. A night for ESPN to brag about how they can bring Bristol and Hollywood and pass out awards to athletes that no athlete ever dreams of winning.

Put it this way — they aren’t throwing any parades in downtown Cleveland because the Cavs won the ESPY for Best Team.

The ESPYs have evolved over the past two decades into a way for the network to monopolize yet another day on the calendar: the night after the MLB All-Star Game, the most dormant evening in the sporting year.

And yet, in recent years there has been another evolution. One for the better. It’s become apparent that the ESPYs aren’t just an evening to get worked up over ESPN’s awards anymore.

The ESPYs have actually become a night that matters to the sports world.

And it’s not about the Best Athlete or Best Team or Best Play. And it sure isn’t about seeing Justin Timberlake and J.J. Watt share the same stage. It’s about using the evening to the best of its capabilities — honoring those persons in sports who have made an impact beyond the playing field and offering a platform to lift up important social issues.

The real highlight of the ESPYs have become the special honorees who receive the Arthur Ashe Courage Award, the Jimmy V Perseverance Award, and the Pat Tillman Award for Service. These awards have provided memorable and inspirational moments that transcend honors for mere athletic accomplishments or your typical awards show monologue.

This year, Craig Sager received the Jimmy V Award and if you haven’t yet seen his acceptance speech, it’s definitely worth seeing. If you have seen it, it’s worth seeing again. Sager’s battle with cancer and the way he’s continued to be a ray of hope as brightly colored as his traditional colorful suits was truly worth lifting up in front of a primetime national television audience.

The Jimmy V Award has been in existence since 2007 and has honored such individuals as Kay Yow, Eric LeGrand, and Leah and Devon Still. Perhaps its most memorable recipient was SportsCenter anchor Stuart Scott, who gave this incredibly moving speech in 2014 shortly before his passing after his own battle with cancer.

Given in honor of its namesake Jim Valvano, the presentation of the award has become one of the most touching moments on the sports calendar. And it calls back to what is still the seminal moment in the history of the ESPYs, and maybe even in the history of ESPN itself, Jim Valvano’s speech at the very first ESPYs in 1993.

Valvano received the first Arthur Ashe Courage Award back in 1993 and throughout the years, it has been given to the likes of Muhammad Ali, Pat Tillman (who now has an ESPY Award named after him), Nelson Mandela, Pat Summit, and Robin Roberts.

In 2014 and 2015, the ESPYs made waves socially by giving the Ashe award to Michael Sam and Caitlyn Jenner, respectively. Those choices, as polarizing as they may be to some, have also now marked the ESPYs as a night to highlight where sports and society come together. More specifically, the ESPYs have become a night where sports can advocate for social progress and change.

That truth was again evident last night as the ESPYs opened with quite the surprise: LeBron James, Dwyane Wade, Carmelo Anthony, and Chris Paul on the stage with a call to all athletes to change society for the better after weeks of tragic violence.

WATCH: "We all have to do better." – @KingJames #ESPYS https://t.co/PsqLjsutZg

“Let’s use this moment as a call to action for all professional athletes to educate ourselves, explore these issues, speak up, use our influence, and renounce all violence.  And most importantly, go back to our communities.  Invest our time, our resources, help rebuild them, help strengthen them, help change them.  We all have to do better.”

LeBron James said that. On the ESPYs stage in 2016. Don’t move on reading this column or going on with your sports fandom without taking just one moment to let that sink in. The next time you hear someone complain that athletes don’t care about the world around them or they’re too timid to take a stand for social issues, show them that clip. The next time Skip Bayless tries to get away with condemning LeBron James for daring to breathe on an odd-numbered day of the month, think about this clip. For whatever LeBron and his fellow NBA stars who took the stage last night do in their careers on the floor, what they did last night by showing a willingness to speak out on such an important issue in that way was just as meaningful.

Could there be another platform in sports or in pop culture where they could take such a powerful stand? Maybe LeBron could have used the platform in his postgame interview after winning the NBA Finals or at the championship parade in downtown Cleveland. That might be asking too much in those celebratory situations, though. There was just something about last night that seemed like the perfect fit. The opening of the ESPYs felt like the perfect place and the perfect time to deliver the perfect message.

It was reportedly James’ idea to use the ESPYs stage to deliver this message.

We were told that LeBron went to the ESPY/ESPN producers a few days ago with the ESPYs open idea. (1/3) @dpshow

The people listed above are only the tip of the iceberg when it comes to those individuals rightly acclaimed at the ESPYs. The family of Zaevion Dobson accepting the Arthur Ashe Courage Award was a powerful moment. As was Sgt. Elizabeth Marks receiving the Pat Tillman Award for Service. And then there was Kareem Abdul-Jabbar, who paid a fitting tribute to Muhammad Ali. These moments, and others like them over the years, have transformed the ESPYs from the superficial feeling of ESPN trying to go Hollywood into something that has real and lasting value for the sports world and beyond.

It may have taken 20 years, but the ESPYs may have finally found their true meaning. And that meaning is found in people like Valvano and Sager and Scott and those others that have been lifted up because they meant so much more than sports. That meaning is found in athletes taking hold of an opportunity to use their platform to make a difference. If the ESPYs can provide those things, even if it’s just for one evening, then the entire endeavor is worth it.