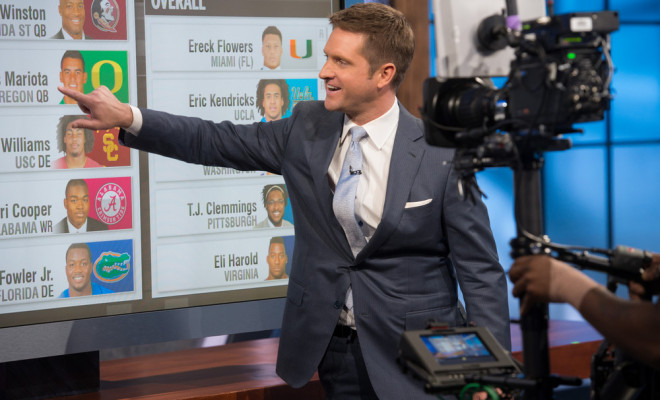 The NFL draft annually brings out a host of bizarre opinions that are only tangentially football-related, such as a scout’s thoughts on Eli Apple’s cooking skills, and ESPN draft analyst Todd McShay displayed one of his own Wednesday night. Following Ole Miss offensive tackle Laremy Tunsil’s slide to the thirteenth pick in the wake of an apparent video of him taking a bong hit being posted to his Twitter account, a subsequent apparent screencapped text conversation of him asking a Ole Miss coach for money being posted to his Instagram account, and Tunsil admitting to taking money from coaches in his post-draft press conference, McShay decided to bash Tunsil for answering the question:

Here’s the transcript of that:

One thing Tunsil did today that was his fault, and he never should have done, is answering those questions, then go sell out the coaching staff at Ole Miss. He’s going to have to mature very quickly or else this league is going to eat him up.

Before that, McShay talked about how Ole Miss coach Hugh Freeze was standing by Tunsil:

“Where’s his agent?” McShay said. “He shouldn’t be fielding questions like this … You can’t have a worse night than Ole Miss had … this is a real bad look for Ole Miss … Hugh Freeze is the guy that is standing there as (Tunsil is) going through this ordeal, he’s the one standing by my side and protecting me …”

McShay took plenty of heat as a result:

Todd McShay just called out Laremy Tunsil for being honest under some B.S. code to Ole Miss. McShay is paid by a media company. Remarkable.

So in McShay's view, Tunsil should have lied to protect Ole Miss' image? That's a bizarre thing to say. https://t.co/h0TuQwpqGg

Even some friendly fire from Dan Lebetard

McShay went on ESPN Radio’s Russillo and Kanell Friday to explain his comments:

“You know me pretty well by this point, I don’t condone lying,” McShay said. “We’ve had a hundred conversations over the years about players, especially at the combine and in interviews with all these NFL teams, always saying ‘Be honest, tell the truth, the truth is going to come out anyway. Just be upfront and own it and you should be able to move on and that’s just how it works.’ The mistake I made last night was in a limited time, I tried to squeeze in a point that I just didn’t make very well. I was not condoning lying, I just didn’t say it the way I wanted to say it. My point was, what I was trying to say, what I did not say very well, was first of all, the agent, there should have been some representation there in this very, very unique situation. In a 24-hour period, we’ve found out the father is suing him, we’ve got all this different information about accounts being hacked and social media, call it every hour something new is coming out. So I thought that he should have been represented and had some counsel there with him. Secondly, he should have recognized that in this situation it was just not the time to be answering these kinds of questions. This kind of environment was not the time. That’s the point I was trying to make, I did not make it very well, and I apologize if it was taken for something I did not mean to say.”

That’s a bit of a step back from McShay, and an admission he should have made this point in a more nuanced way, but it still doesn’t change his basic comment; he believes Tunsil should have declined to answer those questions, and that his answering those questions was the wrong move. Of course, McShay can believe whatever he wants to on that front, but it’s interesting to see someone who works for a media company arguing that players shouldn’t comment on controversial subjects. McShay is not a reporter, so it’s understandable that he doesn’t necessarily have a reporter’s perspective here, but it’s worth asking just his comments here do bring to the table. McShay may think it’s better for players to decline comment, but that’s an odd thing for a media company to air.