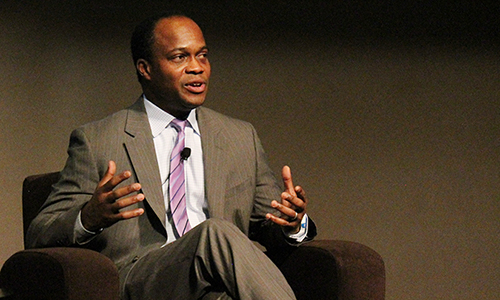 ESPN executives have heard these criticisms many times before and are eager to counter them. They know that people watch “SportsCenter” differently. But Rob King, ESPN’s senior vice president of “SportsCenter” and news, refuses to concede the point that consumers’ move to mobile dooms “SportsCenter” as a television product. He believes that ESPN is making the necessary changes that eventually will turn “SportsCenter” ratings around.

“We could spend a lot of energy reading points of view on ‘SportsCenter’ from folks who don’t work within ‘SportsCenter,’” King said. “They haven’t seen the amount of work that’s being produced by folks designed to get everywhere … I would expect that the work we’ve done over the last couple of years to truly differentiate those hours will take some time for people to recognize and attach themselves and see the kinds of things that we’ve done.”

Those changes have centered on the idea of creating deeper connections with “SportsCenter” viewers, from having anchors show more of their personality to taking the show on the road more frequently.

King is most pleased that each show has its own identity, which he believes keeps it from becoming a formulaic news and highlights show. “SportsCenter: AM” (7-10 a.m. ET) is programmed more for morning commuters, while the 10 a.m. “SportsCenter” with Hannah Storm gets more in-depth on topics.

Meanwhile, “SportsCenter” anchors have been told to allow their personalities to emerge more than they have in the past and become more transparent about the teams they support. King believes this helps create a deeper connection with their viewers.

ESPN has created some editions around the host’s personality, like Scott Van Pelt’s late-night show, which is heavy on college sports, gambling, golf and, of course, University of Maryland references.

“We were moved to do it because it was something that would move Scott and the production team to the point of passion, but also because we knew that it made sense from an audience perspective,” King said.

So, really, Horowitz and King are almost on the same page here in terms of personality-focused shows and moving away from traditional SportsCenter. They’re just doing it in different ways; for Horowitz, that’s channeling Fox News and embracing debate, while King’s SportsCenters are still news and highlights-focused, just with a little more personality and differentiation than we’ve seen at some points of the recent past. (Interestingly, some of ESPN’s biggest SportsCenter successes, like the Dan Patrick/Keith Olbermann “Big Show,” did embrace personality to an extent.) It’s noteworthy to see ESPN and Fox executives sniping back and forth publicly, though, and King’s closing line in Ourand’s piece reads like a direct shot at FS1’s low ratings:

“TV ratings matter. We think about them a lot, and I don’t want to be cavalier about it,” King said. “When measurements start taking in real-time viewing across all platforms, the story will appear less dire. We have evidence every day that people are changing how they are consuming. But I also think there is a big question about television specifically and its demand that people do one thing when we want them to do it.”

As an example, King pointed to the 1 a.m. ET “SportsCenter” following the April 13 Lakers-Jazz game when Kobe Bryant scored 60 points. “SportsCenter” logged 116,000 unique viewers who watched a live stream via WatchESPN, in addition to the 1.35 million viewers that watched on the ESPN linear channel. Plus, in the 24 hours after that Lakers game and the Warriors record-setting game that occurred at the same time, ESPN counted 10.9 million video clip starts for those highlights on its nonlinear platforms.

Ouch. Taking shots at ESPN from the chair of a lower-rated network can be playing with fire, and Horowitz just got burned…