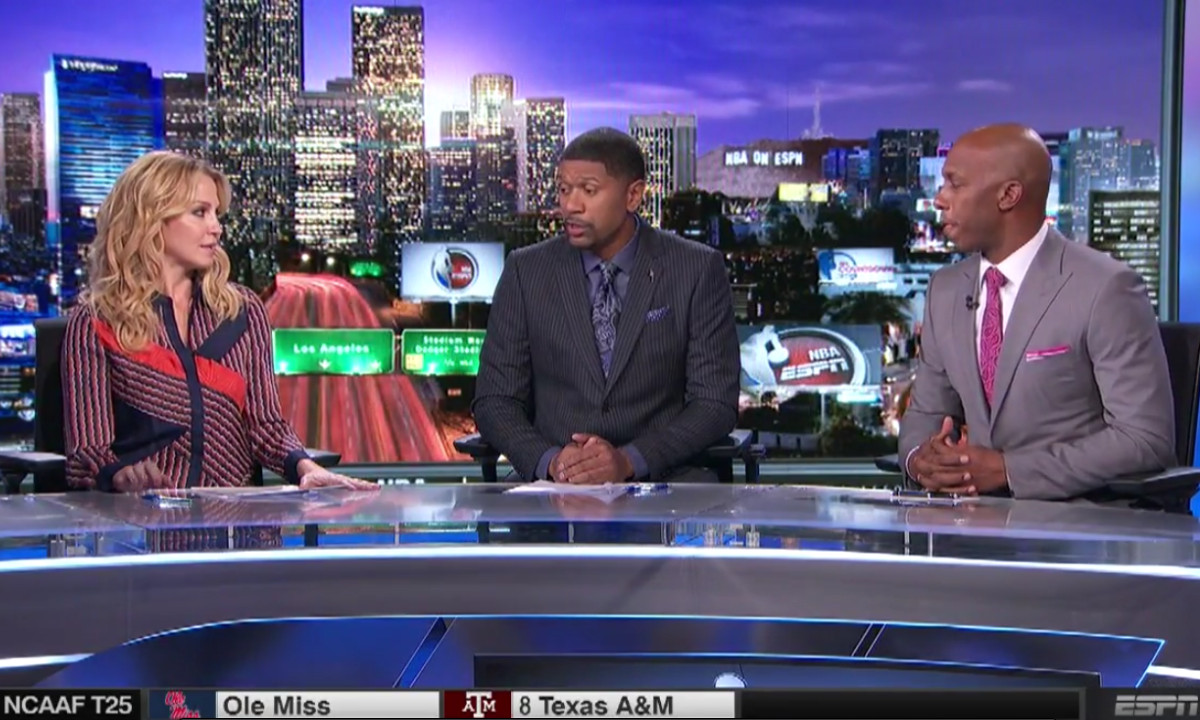 ESPN seems to be going further and further from its initial plan to stay politically neutral. From simulcasting and broadcasting town hall forums on political issues to having its personalities speak up more and more, the times appear to be changing, and that was evident at the start of Wednesday’s NBA Countdown. Following an airing of Stan Van Gundy’s comments about new president-elect Donald Trump, NBA Countdown‘s Michelle Beadle, Jalen Rose and Chauncey Billups went into a prolonged discussion of what Trump’s presidency might mean both for the sports world and for the world beyond:

Here’s a transcription of Rose’s comments, via For The Win’s Andrew Joseph:

“Well, personal politics in general can be a divisive topic. And for Donald Trump, during his candidacy, he became a polarizing candidate, which included along the way, insulting a lot of people. So those same people today as American citizens have to digest that he’s going to be the next president of the United States. How it’s going to affect sports? Unlike Tom Brady, when his team won the championship, and he chose not to go to the White House, saying it was a scheduling conflict when Barack Obama was in office. What we’re going to see in professional sports — NBA and NFL — mark my words, there will be players that decline the opportunity to visit the White House under his presidency.”

We’ve seen players decline to visit the White House before, of course, including Brady and the Boston Bruins’ Tim Thomas, but it certainly does seem possible more will do so with a controversial president such as Trump in power. Billups’ comments perhaps went even further, criticizing Trump overall and talking about his fears for the future.

“And a lot of players, I think, will take that right. It’s just disturbing to me. Yesterday, before I got on the plane to come here, I went by and spent some time with my grandmother. She’s 82 years old. She’s from Mississippi. So you can imagine what she’s seen in her lifetime. We talked a little bit about this election day, and she was so nervous that this would happen, to be honest with you. For me, I feel bad for her, for the generation out there seeing men like this say things like he’s said about women. I was raised by some very strong women, my mother, my grandparents, my aunties who served as grandparents, and then I’m a dad with three daughters, you know, and I fear that the opportunities that have been afforded to some people from different races in this country, they won’t be afforded to my kids. It’s just disappointing.”

Beadle then responded (starting at 0:15 of the first clip):

“No matter what side of the aisle you were on in this one, for me personally, watching it, listening to it, reading it, the last 18 months have brought out what I consider to be the worst in humans that I’ve ever seen. And I’m talking about across the board. It’s just been ugly. And a lot of us just woke up this morning in what I call a haze, ‘This is insane, this is crazy, I didn’t expect it to go this way necessarily.’ But where sports, where all of us are concerned, we tend to get worked up, a couple days go by. But this is four years, and I guess what we’re going to see with athletes is how do they react to it?”

The segment then continued on from there with Rose:

“And during that 18 months that you describe, again, there was a lot of collateral damage of people who got insulted along the way. Immigrants. Women. Blacks. Veterans. Muslims. The list goes on and on. Those are now people that have to wrap their head around that he’s the leader in the Oval Office in the near future.

Billups then compared it to parenting:

Beadle then said “Tomorrow will be interesting,” Rose reiterated his point about athletes avoiding a Trump White House, Beadle referenced the Cavs’ visit to the White House Thursday (along with Trump visiting President Obama), and then said “It is game time, we do have sports, we at least get in that bubble for a little while.”

That’s quite the political discussion, and something that goes a long way from what you’d typically expect to see on NBA Countdown. There are undoubtedly ESPN viewers happy to hear this kind of real talk and personal perspective from Rose, Billups and Beadle, but there are also undoubtedly plenty who will be telling them to stick to sports.