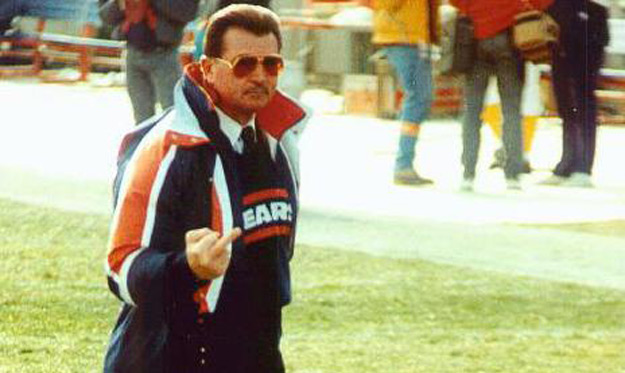 Former NFL coach and ESPN NFL Countdown personality and current “SportsCenter contributor” Mike Ditka apparently has some strong thoughts about Colin Kaepernick and other NFL players who have taken a knee during the national anthem.

Here’s what Ditka said Friday on a radio interview with 105.3 The Fan in Dallas, which was transcribed by “ESPN.com news services” and tweeted from the main @espn account:

“I think it’s a problem … anybody who disrespects this country and the flag,” Ditka, an ESPN analyst, said during a radio interview Friday with 105.3 The Fan in Dallas. “If they don’t like the country they don’t like our flag … get the hell out.”

“I have no respect for Colin Kaepernick — he probably has no respect for me, that’s his choice,” he added. “My choice is, I like this country, I respect our flag, and I don’t see all the atrocities going on in this country that people say are going on.”

…”I see opportunities if people want to look for opportunity — now if they don’t want to look for them — then you can find problems with anything,” Ditka said. “But this is the land of opportunity because you can be anything you want to be if you work. If you don’t work … that’s a different problem. “

That’s quite the hot take from Ditka, telling those players to “get the hell out” and saying “I don’t see all the atrocities.” It’s worth noting that fellow ESPN analyst Paul Finebaum uttered similar sentiments in “This country is not oppressing black people” last month, but later apologized and said “I blew it.” It seems unlikely Ditka will follow suit, though, as this is far from his first hot political take.

In March, Ditka told a different radio show “Obama is the worst president we’ve ever had” and said he’d vote for Trump, and while he turned down an invitation to speak at the Republican National Convention (perhaps at ESPN’s urging, as they told Richard Deitsch “the answer for either convention would be no“), he made it very clear he’s a strong Trump supporter.

He appears to be a proud member of the Old White Coaches for Trump fraternity, which also includes former ESPN commentators Lou Holtz and Bobby Knight. These comments seem well beyond either of those previous statements, though; telling protestors to “get the hell out” feels hotter than just criticizing a president or saying who you’re voting for.

The question is if ESPN will do anything about it. On the one hand, protests from Kaepernick and others are thoroughly a sports issue as well as a political one, and they’ve encouraged their talent to weigh in on these protests on numerous forums, so Ditka’s comments would seem not as defiant towards the “no politics” memo (which is regularly ignored these days anyways) as you might think.

Sanctioning Ditka in any way would also provide further ammunition for the likes of Clay Travis who insist that “ESPN in my opinion has become MSNBC. Everything is so absurdly left-wing and liberal.” On the other hand, it probably doesn’t help the ESPN brand to have one of their commentators telling NFL players to “get the hell out.” It’s also certainly interesting to see ESPN actively covering Ditka’s comments here themselves.

It’s all part of the growing challenge for ESPN in staying politically neutral, which gets tougher and tougher all the time.  Sports and politics are becoming increasingly intermingled, especially in this election, and there’s less and less of a divide over what’s a sports take and what’s a political take. We’ll see if ESPN deems these Ditka comments to be acceptable, or if they create any further stir.