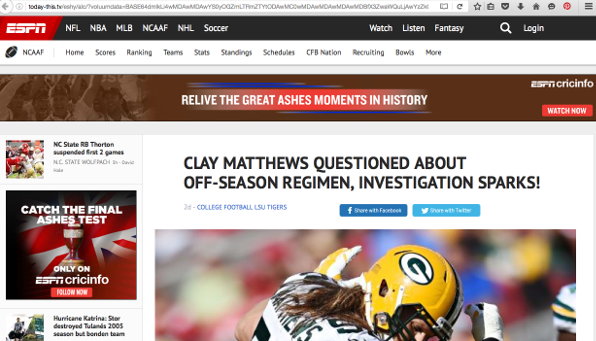 Facebook as a publishing platform is becoming increasingly important for numerous journalistic organizations, including ESPN, but it’s also used by a bunch of fake sites and scammers who impersonate those organizations. As Yahoo Finance’s Melody Hahm writes, one recent post making up news about a supposed suspension to Green Bay Packers’ linebacker Clay Matthews and Aaron Rodgers calling him “a disgrace” claimed to be from ESPN and GoPro and lived on Facebook for a week until it was taken down, amassing over 1,000 likes. Here’s a screenshot of the post: 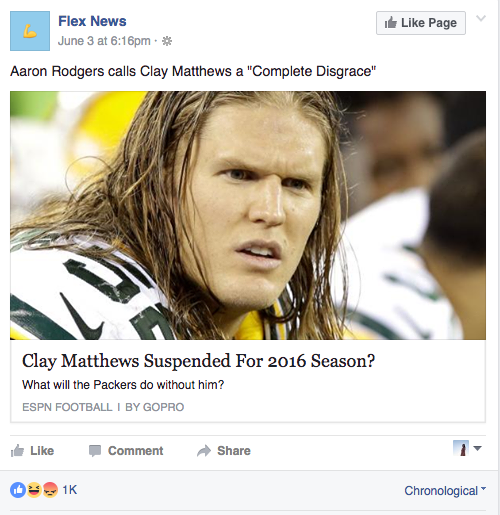 Of course, this is claiming to be news, not an athlete video where the GoPro connection would make sense, but not everyone’s going to look that closely. This is dressed up like something that could easily fool people on first glance and get them to click, which would then take them to a site that’s definitely impersonating ESPN.

Again, this isn’t going to fool anyone who looks closely (the URL bar, “Investigation Sparks!”, the LSU Tigers tag, certain other differences from ESPN.com like the lack of the top scoreboard), but it definitely could fool people on first glance. Fake news sites have even fooled other media outlets before. However, both GoPro SVP of Corporate Communications Jeff Brown and ESPN’s director of communications Kevin Ota told Hahm that while their companies flag these kind of fake posts with Facebook and other services when they see them, they’re not particularly concerned about them:

ESPN’s director of communications Kevin Ota told Yahoo Finance that sports fans are “smart enough to know what’s fake from real ESPN content.” He noted that when he’s flagged about these scam posts, he forwards the issues to the company’s legal department.

Neither ESPN nor GoPro would disclose just how frequently they ask Facebook to take down scam posts, but both say they reached out regarding this post.

“My team says that this is a routine occurrence — that most of this stuff is recognized and eliminated automatically by Facebook, but they’re really great about moving fast on the ones we direct them to,” says Brown.

“It happens quite a bit because of our scale, wide-reaching presence and amount of content we have on various platforms,” Ota says. “But it’s not an actual concern. It’s a nuisance that we have to deal with. It’s not that we don’t take this stuff seriously. But Facebook is a good, responsive partner.”

That’s probably about the right level of response when it comes to Facebook (although it’s interesting that “moving fast” is mentioned here, as this post was up for a week; maybe ESPN and/or GoPro didn’t flag it until shortly before it was taken down, though), but the actual site impersonating ESPN seems like perhaps a bigger deal. Maybe ESPN’s doing something behind the scenes to try and deal with that, or maybe they’re relying on the idea that sports fans are “smart enough to know what’s fake.” If the latter, these ESPN clones will keep fooling at least some people.