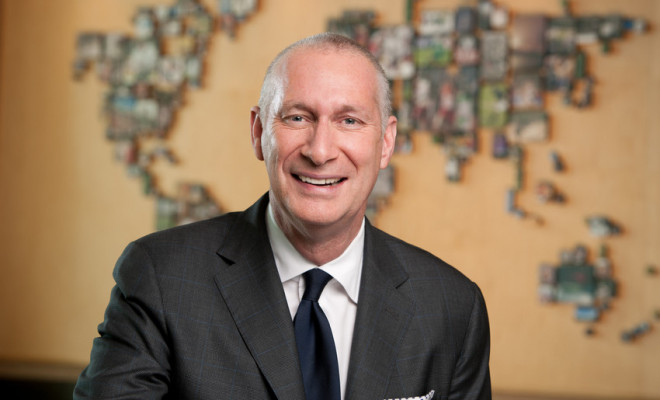 There’s been a lot of talk about the NFL’s declining ratings, with some of ESPN’s NFL properties particularly hard-hit, but ESPN president John Skipper isn’t too worried about what that means for the company. Despite their massive Monday Night Football contract ($15.2 billion over eight years from 2013-2021, calculated as four times the going rate in 2014 when you consider audiences and numbers of games) and Wall Street’s fears for parent corporation Disney about ESPN’s rising costs and decreasing revenues, Skipper doesn’t seem to see the falling NFL ratings as a big problem.


At the 12-second mark, Skipper is asked by moderator Maury Povich (the Maury host, and son of renowned sports journalist Shirley Povich, who this symposium is named after) if he’s worried about the expansion of national NFL windows, the declining ratings and the significant costs. Skipper says (0:29) “No, I’m not worried about that. We do this, and I’m actually worried about what Jimmy said, but we’re a volume company, right? We’re not a broadcast network that does 500 hours a year. We do 51,000 hours a year. We do 1,500 college basketball games and every one of those, somebody watches. It’s amazing. We can aggregate all of those and 1,500 times something is more than 12 times 2. And again, for the NFL, I worry the least. I’m not posturing; the differential in the rating of one point or two points or three points is close to immaterial for us. The value of the NFL is the NFL Live, and Countdown, and billions of video highlights viewed on ESPN.com, and the magazine stuff we do, and SportsCenter and the highlights. We get the preponderance of our value there. So I worry the least about whether we did a nine or a ten. It’s close to immaterial.”

Skipper raises a valid point about how much content ESPN produces, and any piece considering the costs of ESPN’s NFL deal and the value of it should take into consideration all the platforms it touches beyond just Monday Night Football. Highlights are a big deal, both for SportsCenter and ESPN’s other programs, and so are those pre-game and analysis shows. However, this feels a bit callous with regards to one of ESPN’s marquee properties, and one that’s been a key part of the network’s successful negotiations with distributors to keep boosting its per-subscriber fee (a vital source of income). It’s also somewhat silly to bring up college basketball here; yes, ESPN may ultimately pull in more people across those 1,500 games, but it’s the prime properties and the peak audiences that are the most useful in terms of ads. Monday Night Football matters more to ESPN than any individual college basketball game.

Another big part of the issues at ESPN is their declining subscriber rate, and MNF plays in there too; if MNF games are must-watch, that’s a key reason for people to subscribe to ESPN, but if they’re forgettable, that makes it a lot easier to go without the Worldwide Leader (especially if you’re primarily a NFL fan). Skipper is right that the ESPN NFL contract is about much more than just MNF and its ratings, but those ratings declines still matter, and calling them “close to immaterial” is a point of view that’s probably not shared by Disney stockholders.