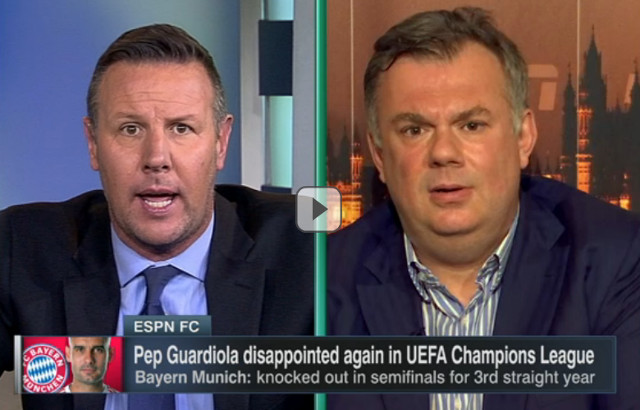 Former Chelsea and Scotland defender/midfielder and current ESPN FC pundit Craig Burley apparently has quite a bone to pick with both Bayern Munich manager Pep Guardiola (who’s exiting for Manchester City) and advanced statistics. This ESPN FC segment from Tuesday starts with the rather ludicrous idea that Guardiola’s time at Bayern Munich was a failure (because apparently three straight Champions League semifinals, a UEFA Super Cup, a DFB-Pokal cup title and what looks likely to be a third-straight Bundesliga championships  isn’t good these days?), a notion swiftly rebuked by ESPN’s Gabriele Marcotti. Part of Marcotti’s argument was that even Bayern’s 2-2 loss (on away goals) to Athletico Madrid in this year’s Champions League semifinals was rather unlucky considering expected goals, a widely-used advanced statistic that considers just how likely each shot registered is to go in. Burley then went into a full meltdown over the idea of expected goals (starting at 1:39):

“You’re talking to me about expected goals in the Champions League semifinal that they just lost? What an absolute load of nonsense that is!” Burley starts. Marcotti chimes in with a “Why?” and Burley’s rant continues to gain momentum: “What do you mean, why? I expect things at Christmas from Santa Claus, but they don’t come, right? What I deal in is facts!” Marcotti starts laughing and interjects “That’s not what it means!” and Burley responds, “Well, what does expected goals mean?” Marcotti says “Look, you can go on the internet and find a definition for it, but it’s one vantage point to measure how a team played, by looking at chances, chances created and whatnot,” and Burley interrupts “Look at the results!” That leads to a great stunned expression from Marcotti: 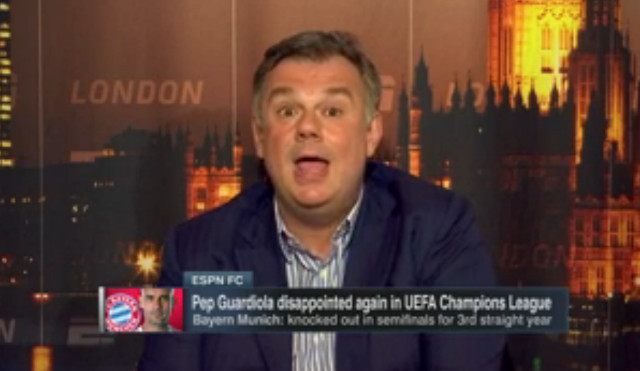 “Well, yes, anybody can look at the results,” Marcotti starts to respond before Burley shouts him down “Of course! Because that’s what the game, that’s what the game, Gab Marcotti, is about! Whether you like it, I like it or anybody likes it, the game is about results! That’s why managers change jobs and get the sack! None of this nonsense about expected goals!”

Marcotti goes on to talk about teams getting lucky or unlucky in the Champions League, and Burley still seems to miss the point, saying “We’re dealing in facts!” Marcotti even goes “I’m agreeing with you!” at one point, and Burley finishes with “I’m not having a go at Guardiola, I’m having a go at you! For coming on this show, and you’re a regular on this show, and talking about expected goals and how that is better than results! I’m sorry, but I’m not having that!”

Some of this does seem to be about Guardiola (who Burley has gone off on before), but the advanced statistics rant is even more notable. Burley (whose Twitter bio includes “argumentative sod”) wasn’t backing down after Twitter criticism, either:

Still, while we can add Burley to the legions of ex-jocks who hate advanced statistics, ESPN as a company is thoroughly embracing them. It’s not hard to see why; of course advanced stats don’t override on-field results (and that’s not the point Marcotti was making), but they enhance the discussion in a way that just yelling and screaming doesn’t. If Burley would prefer to work at a place that’s all about embracing uninformed debate, though, there is an alternative…