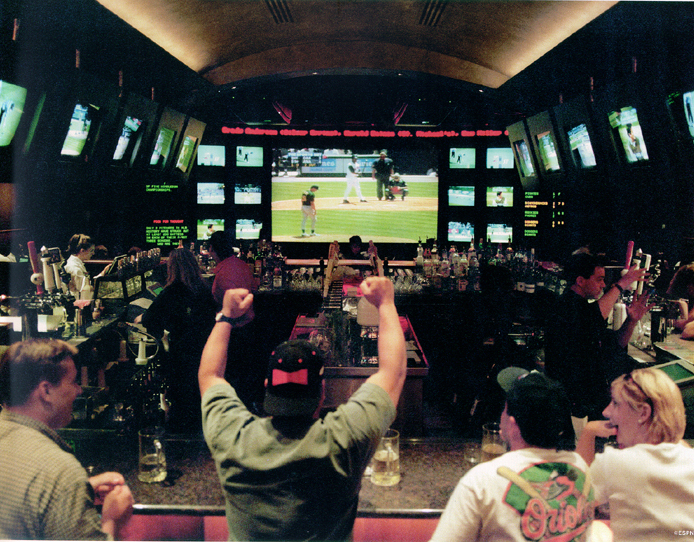 A long-running U.S. television ratings issue has been if and how viewers who watch programming outside their home should be counted, and that’s particularly important for sports and news channels given their prominence in airports, gyms, bars and other public locations. Traditionally, those viewers haven’t been factored into the industry-standard Nielsen ratings, and previous attempts from the likes of ESPN and Turner haven’t changed that. As Anthony Crupi of Ad Age writes in a piece discussing TV networks’ ongoing upfront pitches to advertisers, though, ESPN and Fox are looking to make out-of-home additions a new standard thanks to new, separately-tracked information from Nielsen:

ESPN has seen significant lifts in its audience deliveries when those previously undocumented out of home views were recaptured by Nielsen, according to Artie Bulgrin, senior VP-global research and analytics at ESPN.

…Mr. Bulgrin said ESPN is in the early stages of discussing the out-of-home numbers with media agencies and advertisers. “We’re just starting the process now, but you can be sure we’ll be sharing the data with our clients in a very big way,” he said.

While it’s anyone’s guess when the data officially will be rolled up with Nielsen’s in-home ratings, ESPN is ready to begin transacting against the bonus impressions. “We’ve had advanced conversations with certain folks already, and we expect to see [the OOH deliveries] reflected in deals with our marketing partners in this year’s upfront,” said Eric Johnson, exec VP of global multimedia sales, ESPN.

Fox advertising and programming executives on Monday echoed ESPN’s sentiments, saying that out-of-home will be a factor during the summer sell-off, as it looks to monetize this historically untapped source of ratings points.

“We’re definitely going to be talking about this in a big way,” said one Fox ad exec.

…”ESPN perhaps may be more underreported than any network out there, and this is a perfectly valid audience,” Mr. Bulgrin said. “We’ve waited a long time for this.”

The numbers ESPN cites are impressive (a six per cent gain for SportsCenter from Sept 2015 to March 2016, a nine per cent boost for primetime college football, a 17 per cent boost for their wild-card NFL playoff game), and it seems likely that Fox’s audiences would rise substantially from this as well. The portable people meter system discussed here was brought in in Canada in 2009, and played a major role in lifting sports ratings there almost across the board. However, there are some caveats to it.

It’s no surprise that this system is presumed to help sports ratings more than anything else, given the large numbers of restaurants and bars (30 per cent of out-of-home ESPN viewing, according to Crupi’s piece), gyms, offices, hotel rooms and more that ESPN and other sports channels are often televised in. PPMs are by design a passive system set up just to track audio frequencies, though, so they’ll pick up ESPN on in a bar regardless of if the PPM-wearer is actually looking at the TV or engaged in a conversation with friends; thus, these “eyeballs” may not actually be attentive eyeballs at all. Granted, that can  the case with home viewing too, but it may be even more of a concern in a public location. That’s part of why previous attempts along these lines from Nielsen and Arbitron (since acquired by Nielsen) didn’t become a standard, and it’s part of why these are unlikely to be rolled into an overall Nielsen system until at least 2017.

The other question here is if advertisers will buy it. After all, that’s what the ratings really matter for; how much can a network charge for an ad spot on any given program, and will they have to deliver makegoods (as ESPN did following the lackluster College Football Playoff numbers this year) if the ratings don’t hit what they promise? Advertisers may well argue that these out-of-home viewers aren’t all that attentive, and that this out-of-home viewership was already priced into the cost of ads on live sporting events regardless of its lack of consideration in Nielsen ratings. ESPN and Fox can cite all the out-of-home numbers they want, but those numbers will only matter if they find advertisers willing to pay a higher price as a result. However, ESPN president of global sales and marketing Ed Erhardt told Oriana Schwidnt of The International Business Times Tuesday he’s optimistic out-of-home measurement will catch on with advertisers:

And now it wants advertisers to pay for both of them.

“We like our chances, being as pervasive as we are,” Erhardt told International Business Times. “You go into any bar or restaurant, we’re at least one of the two or three things on.”

….”It’s time to challenge, rethink and reconsider how we market, how we measure, how we engage our customers,” Erhardt told the media buyers and clients gathered at the event. “ESPN embraces this revolution.”

This is hardly the first time a sports network has tried to get credit for so-called out-of-home viewing. It’s also not exactly an easy sell. Advertisers have actually been paying for these audiences; the buyers will argue the viewers are already baked into the premium prices live sports command.

The difference this time, Erhardt told IBT, is that lower ratings have actually led to increased prices, thanks to the law of supply and demand: as demand for viewers increases, and supply decreases, price increases. “I think advertisers would prefer an accurate measurement and pay whatever’s the appropriate price, rather than pay an artificial price based on a less accurate rating,” he said.

It’s going to be interesting to see if advertisers agree. All ratings are estimates anyway, and while including out-of-home viewing may make those estimates more favorable for sports networks, that’s only going to matter if the advertisers concur that these previously-uncounted impressions make ads worth more now that they’re more regularly counted. If they do and the guideposts shift as a result, though, this could be a huge move for the sports industry. That’s why it’s important that this is a multi-network effort rather than just a ESPN one, and it wouldn’t be surprising at all to see the likes of Turner, NBC,  and CBS eventually get on board; Turner in particular has been involved in past efforts along these lines, and the Canadian example suggests that this kind of system will lift all sports networks’ boats. However, this move will only really matter if the advertisers jump on board. We’ll have to wait and see if they do.