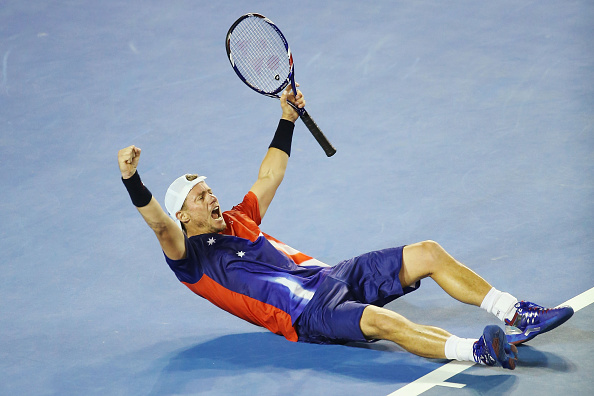 Tennis fans, especially in America, have long had issues actually being able to watch matches. It’s certainly a problem at smaller tournaments, and even at the Grand Slams it can be an issue. I have long lamented the fact that, at the biggest of stages, there are still matches that can’t be seen. Obviously, with matches played on 15 or more distinct courts, no one can televise the entirety of the tournament. But internet streaming has been around for a while now, and the time for top-level tennis to catch up in the streaming department is long overdue. This obviously requires the cooperation of both the tournament and one (or more) television networks, but it really shouldn’t be difficult to do.

Tiny tennis tournaments across the world stream at least one of their courts. Most Challenger-level tournaments (the tour below the ATP World Tour–usually players ranked from approximately 100-300 consistently compete in Challenger events) have at least one court with a camera on it. There is rarely commentary. Sometimes there is someone manning the stream so that replays of important moments can be shown. But most tournaments have a camera. Even a few Futures-level (the lowest level of professional tournaments) stream their main court. If tiny tournaments on shoestring budgets can find a way to let us watch tennis, then the biggest tournaments in the world–with TV and advertising deals worth hundreds of millions of dollars–can put a camera on every court

There are 128 matches played in the first round of a Grand Slam, between the men and the women. Potential historic moments are waiting at every turn. I like to point out that at Wimbledon 2011, John Isner and Nicolas Mahut were relative unknowns. Isner was only popular because of the dearth of top American tennis players. Their historic three-day match was played on Court 18–a middle of the road court by Wimbledon standards. Had that match been two years earlier, it could have easily been on a non-televised court. That is the risk you run by not having a camera on every court.

So imagine my delight when, while looking at the ESPN3 lineup, I saw this: 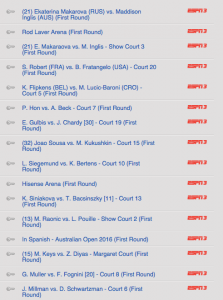 There are 15 courts that see action in the early rounds of the Australian Open. This list has every single one of them.

Tennis fans, at least in the US, who want to watch any player in the early rounds of the Australian Open can see whoever they want. This has happened at least once before in Grand Slam history. I cannot find a source, but I do recall that the US Open once also streamed every court (I believe it was in 2012). However, the US Open and their television partners did not continue that trend. I do not know if this year’s Australian Open is the start of a new trend or just another one-time aberration, but either way tennis fans should be grateful.

ESPN3 is not available to everyone, unfortunately. You need to sign in with a cable or satellite provider–basically, it is available to everyone who has access to ESPN. It probably does include the vast majority of those interested in watching side courts at a Slam, though, which is the important demographic for these purposes anyway.

ESPN3’s upcoming schedule has the side courts available for most of the tournament days, but we will have to wait and see if they will still air the streams when these courts are only showing doubles and/or juniors, which ESPN3 often does not stream–even when that same court was being streamed earlier in the tournament.