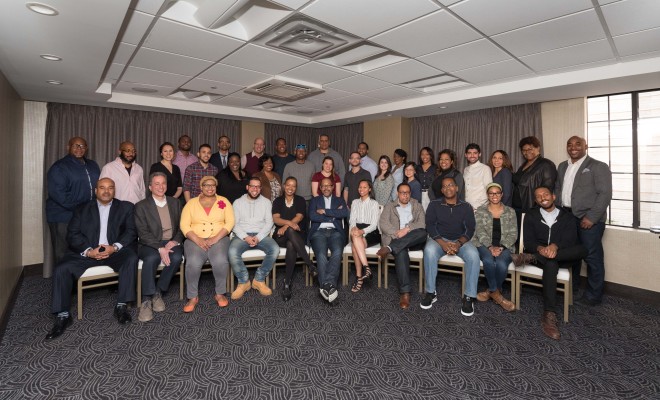 After years of turbulent development, we finally have a launch date for ESPN’s The Undefeated: May 17. Senior vice president and editor-in-chief Kevin Merida (who was hired last October to replace initial editor-in-chief Jason Whitlock) officially announced the date Monday at a company employee forum. Here’s more from ESPN’s release:

TheUndefeated.com will combine innovative long-form and short-form storytelling, original reporting and provocative commentary to enlighten and entertain African Americans, as well as sports fans seeking a deeper understanding of black athletes, culture and related issues. The name, The Undefeated, is inspired by a passage from American poet, author and civil rights leader Maya Angelou: “You may encounter many defeats, but you must not be defeated. In fact, it may be necessary to encounter the defeats, so you can know who you are, what you can rise from, how you can still come out of it.”

Merida also said in the release that there’s a special significance to that date:

Well, ironically, May 17th is the 62nd anniversary of the Brown v. Board of Education decision. It’s not one of the big anniversaries. But when I think of the Brown case, I think of Thurgood Marshall. Of his steadfast determination, and unbelievable courage, to dismantle segregation by any legal means necessary. He incurred countless death threats, went into the most dangerous places in the South for a black man, and challenged racism directly. He is what it means to be “Undefeated.” If you win 90% of the cases you argue before the Supreme Court as a lawyer, and difficult cases, you are in the Hall of Fame of The Undefeated. You’re in the Hall of Fame of America.

Now, May 17th also happens to be the date of ESPN’s presentation of new products at the Upfronts, and we’ll be in the heart of the NBA playoffs, a thrilling time for our audience. But on launch date, I will be remembering Thurgood Marshall. We’re not here without Thurgood Marshall.

It’s going to be interesting to see just how The Undefeated does given its rocky road to this point, including the removal and exit of Whitlock, but also given how much ESPN has invested in it. Merida has made plenty of promising comments about his plans before, and he says in the release that “We want to produce work that is cool, smart, innovative, provocative and memorable. We are going to aggressively experiment, and be brave about that.” We’ll see just how they do with that.