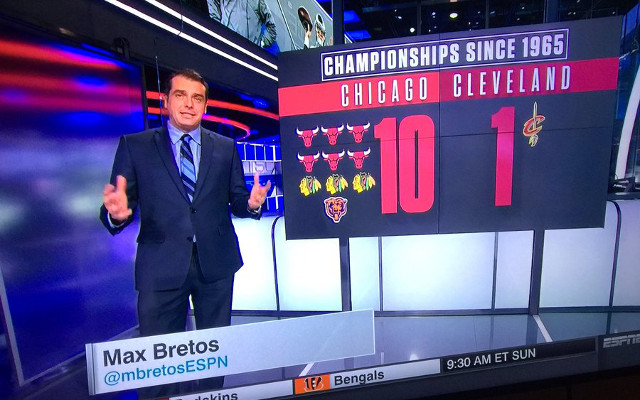 It appears that much of the sports media world has decided to ignore the Chicago White Sox’ 2005 championship and 1959 AL pennant while discussing the Cubs’ appearance in the World Series. Tweets from ESPN’s @SportsCenter account and CBS’ @CBSThisMorning account both talked about a 71-year World Series drought for Chicago (nope), and ESPN then doubled down on it with a SportsCenter segment Monday that specifically disregarded the White Sox when discussing championships since 1965.

[Update: ESPN has since apologized for excluding the White Sox here. From a statement sent to AA: “We expect better of ourselves and apologize for our mistake.  No excuses, we made an error.”]

Here’s a screencap of the initial segment,  which provoked plenty of Twitter outrage:

Following that, Bretos took to Twitter to say the White Sox were specifically excluded…because Cubs’ fans wouldn’t cheer for them? [Update: his tweet has since been deleted.]

I guess that’s somewhat of a justification, but a “Championships Since 1965 graphic” comparing Chicago and Cleveland that doesn’t count the White Sox feels like a tortured leap in logic. If this is only things Cubs’ fans like, why include the Blackhawks, Bulls and Bears? (And why not include the Chicago Fire’s 1998 MLS Cup or their four US Open Cup titles?) Some Cubs’ fans may be fans of some or all of those teams, but the fanbases certainly don’t completely overlap, and many who root for those other teams root for the White Sox. Moreover, the Cubs’ run here has seen many prominent White Sox fans, including owner Jerry Reinsdorf and President Barack Obama, say they’re rooting for the Cubs, so it’s not like every White Sox fan wants them to fail,  and there may have been some Cubs’ fans who were happy with the White Sox’s 2005 victory. Some people have AL and NL teams, and some root for their city no matter what.

The story of the Cubs’ championship drought is a remarkable one, and it’s certainly notable that they haven’t even been to the World Series in 71 years. However, that story’s notable enough in its own right, and the numbers of media outlets downplaying that Chicago won a championship in this same sport just 11 years ago are getting ridiculous. As that graphic shows, too, Chicago as a city certainly hasn’t been lacking for championships. By all means, tell the story of the Cubs’ drought, but how about if we agree to make those stories just about the Cubs and stop using seemingly-wider-ranging graphics and segments that overlook the White Sox, intentionally or otherwise?

[Update: It’s good to see ESPN admit that they made a mistake here. Hopefully, no one else will omit the White Sox in future graphics or discussions of Chicago championships.]