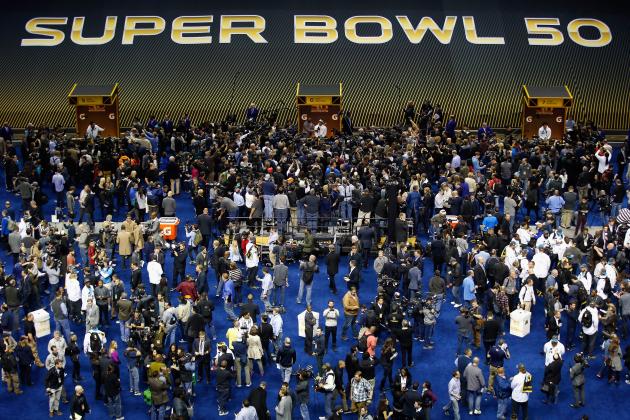 Super Bowl media coverage has long been questionable (read Hunter S. Thompson’s 1974 piece for a list of issues that are still around today), but “Super Bowl Media Day” in particular has provided some of the worst stuff. There have been dumb questions throughout the event’s history (such as “Was it dead mother, blind father or blind mother, dead father?” to Jim Plunkett in 1981), but the last couple of decades have seen it go even further from football coverage of any sort, starting with MTV’s Downtown Julie Brown in 1991 and moving through Kurt Warner’s voodoo hair in 1999 and Inez Gomez Mont (now Inez Sainz)’s marriage proposal to Tom Brady in 2008.

The NFL has sold $30 tickets to fans for the last several years and moved the event to prime time this year, where it included such reputable journalists as Miss Universe, two different guys in skinsuits, someone dressed as The Muppets’ Swedish Chef, puppets, and an actual clown. It’s a spectacle for the league, and it’s understandable why it continues to hold it; it creates plenty of attention for the NFL on shows and networks that don’t usually cover it, it provides content for NFL Network, and it’s both a source of revenue from the fan tickets and a way to make fans feel “included” (even if they only get to sit in the seats and watch the interviews, because people in costumes clearly have more of a right to ask questions than fans). What doesn’t make sense is why ESPN continues to televise it.

The Worldwide Leader’s defense for questionable content has usually been “It has been great for ratings,” as Marcia Keegan said about First Take, but that doesn’t really fly here. The primetime Media Day Monday drew just 281,000 viewers to ESPN2, the fifth-most watched show on The Deuce that day behind First Take (478,000), His and Hers (341,000), a First Take replay (315,000), and Mike and Mike (299,000), and barely ahead of Outside The Lines (278,000). That’s also barely over half of the 557,000 the Pro Bowl Draft drew to ESPN2 last week. Now, a further 413,000 people tuned into the Media Day broadcast on NFL Network, so there is some interest in this, but there doesn’t seem to be a lot of benefit for ESPN in carrying this as well. They could probably draw a larger audience and do so more cheaply if they just reran First Take again.

So, if there’s no ratings benefit, why do they do it? It’s not particularly for journalistic benefit; Media Day has produced next to nothing on that front for the last few years, with this year’s providing particularly little in terms of storylines. Yes, they can grab some soundbites for SportsCenter, but they’d be doing that anyways even if they weren’t broadcasting the entire event. It could be that ESPN keeps carrying Media Day as a favor to the NFL, as we’ve heard plenty on how important that relationship is to them, but this isn’t really a massive NFL benefit either; yes, it provides further NFL coverage on ESPN2, but this is something that’s already carried on NFLN, and taking it off the ESPN airwaves would likely help bolster the NFLN ratings. Thus, there sure doesn’t seem to be a significant reason for ESPN to keep broadcasting Media Day. We’ll see if they stick with it next year, or if they realize that running almost anything else would probably be a better programming decision.