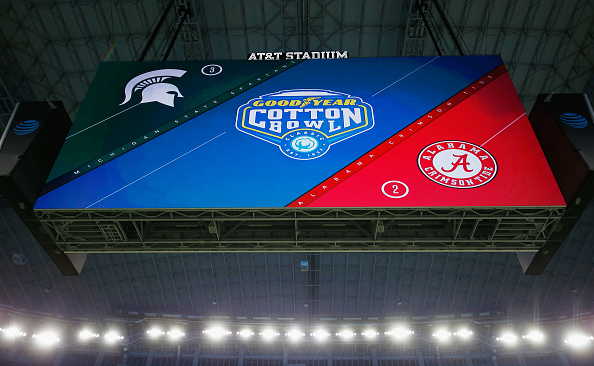 The move to play the College Football Playoff semifinals on New Year’s Eve rather on the New Year’s Day had the expected results. Ratings which were a record on January 1, 2015 turned out to be much lower on December 31, 2015. With one semifinal, the Orange Bowl being played at 4 p.m. ET when much of the country was at work, and the other, the Cotton Bowl kicking off after 8 p.m. ET when many people in the Eastern half of the country were out for NYE festivities and parties, the overnights turned out to be 36% lower from last year’s record numbers.

How were the numbers? Sports Business Journal’s John Ourand tweeted the news:

Of course, ESPN is putting a positive spin on its numbers saying that combined with the 4.0 overnight for the Peach Bowl, the network “averaged a 7.7 overnight, up 79% from the 2014 New Year’s Eve tripleheader (Peach, Fiesta and Orange Bowl).” Sure the numbers were better as the semifinals were played on NYE, but people had other things to do and the Alabama blowout of Michigan State in the Cotton Bowl didn’t help either.

Jay Posner of the San Diego Union-Tribune had the numbers for his town and they weren’t good for the College Football Playoff either:

Don't have final ratings for yesterday's playoff games here but first game did about a 5 and second about a 6.5. Horrendous.

So what is the takeaway? The games won’t do as well on New Year’s Eve as compared to New Year’s Day when most Americans have the holiday off and are willing to watch sports. As the College Football Playoff will have semifinal games on New Year’s Eve for 7 more times in the current contract, the ESPN and the organizers knew what they were getting when they signed on the dotted line. Asking Americans to break their habits on December 31 is just about impossible, so we’ll have to deal with this until the next contract.

ESPN tried to convince the College Football Playoff to move this season’s semifinals to January 2, but was unsuccessful. Once it knew the games weren’t going to move, ESPN did embrace the idea of having the games on NYE.

And according to AdWeek, ESPN will have Nielsen measure out-of-home viewing for the first time for the semifinals seeking to find out how many people were watching in bars so the numbers for Thursday’s games will likely go up.

Until the bowls come together and decide to play the semifinals on January 1 regardless of the game or location, we’ll have to get used to it, and either stay home and watch or set the DVR to see it the following day. Or watch on our mobiles while attending our NYE festivities.

UPDATE: Viewership numbers are out and they were also very much down.  From the record cable audiences of 28 million to almost being cut in half for the Orange Bowl and down almost 10 million for the Cotton Bowl versus the semifinals last year.