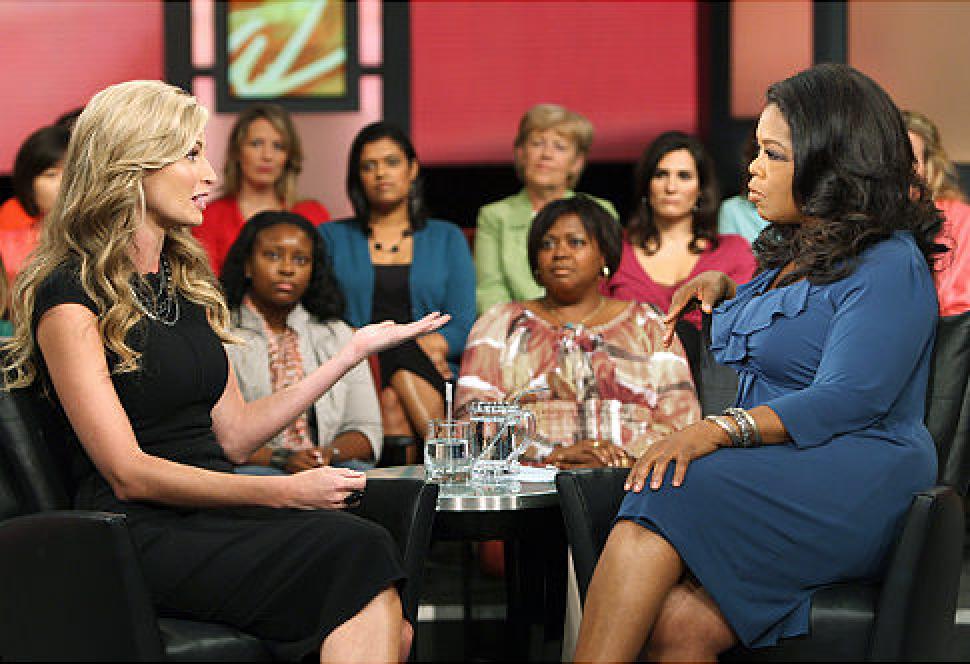 Fox broadcaster Erin Andrews’ testimony Monday in her civil lawsuit against stalker Michael David Barrett and the Nashville Marriott seemed bad enough for ESPN when only the paraphrases of her quotes about what the company asked her to do before resuming work were reported, but they’re substantially worse for the network with the full quotes.

Entertainment Tonight reported that Andrews testified ESPN forced her to do a sit-down interview discussing the video before returning to work, and even worse, suggested it be on corporate sibling ABC’s Good Morning America:

Shortly after the nude videos went viral, Andrews did an interview with Oprah Winfrey about the scandal. Andrews claimed that she didn’t want to give an interview at the time, but went through with it at the urging of her superiors at ESPN.

“Because there wasn’t an arrest, because we didn’t know where this happened, my bosses at ESPN told me, ‘Before you go back on-air for college football, we need you to give us a sit-down interview,'” she said. “That was the only way I was going to be allowed back.”

“They were highly recommending it be GMA (Good Morning America), because ESPN and ABC are the same and they wanted it on GMA, but like my dad had said the other day, I didn’t want it to be a two-second thing,” she continued. “No, this is my life and I feel terrible about myself, and we want to figure out how this happened.”

Andrews said she chose Winfrey because of her public claims that she had been the victim of sexual abuse in the past.

“I talked to her producers,” Andrews said. “I told her I didn’t want to do it, but this was the only way I was going to be put back on air.”

This looks incredibly bad for ESPN. Forcing Andrews to discuss such a humiliating situation publicly is highly problematic, and trying to suggest that it be on their corporate partner is even worse. Saying that she had to discuss it on-air before coming back to work also makes them seem unsympathetic at best, and makes them appear closer to the FBI and others who didn’t initially believe she wasn’t involved and thought it was a publicity stunt.

Granted, this is only Andrews’ side of the story, but ESPN’s decision to decline to comment to ET Online suggests they don’t have an obvious answer to her testimony. If this did play out as Andrews said, ESPN needs to take a long, hard look at their policies, and they need to work hard to improve them for any employees who are victimized in the future. The network should have their employees’ physical and mental health foremost in mind, not any skepticism (either internally or publicly). And they certainly shouldn’t be trying to direct their employees’ comments on such sensitive issues to other Disney networks in the name of corporate synergy.

To demand an interview of Andrews after this horrible situation is bad enough. To try to profit off of it is even worse.

UPDATE: ESPN has responded to Andrews’ testimony and the negative reaction towards the company with this statement given to SI’s Richard Deitsch: