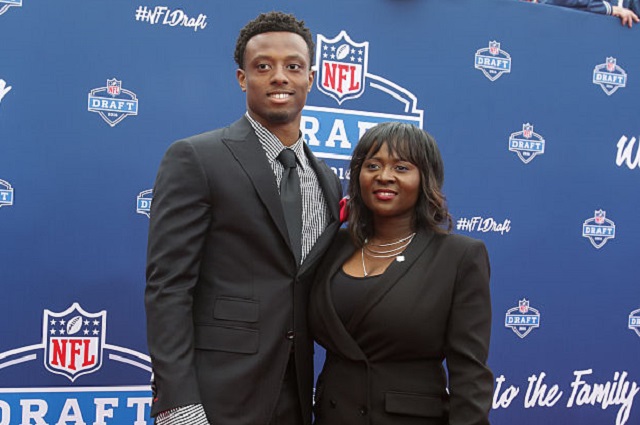 Her son has yet to play a single down of NFL football, but Annie Apple is already finding her voice in the NFL. One of the surprise stars of the NFL Draft, Annie Apple has been hired by ESPN to be a contributor on Sunday NFL Countdown.

Yep, you read that correctly. A player’s mom was just hired by ESPN to be an NFL contributor. According to a release from ESPN, Apple will be taking on player profiles and other stories for ESPN’s Sunday NFL Countdown program. Her personality during the NFL Draft is what drew ESPN to her, and the network is hoping her charm and sense of humor will carry over to the pregame coverage.

“Annie caught our attention during the NFL Draft and when we met with her in-person at ESPN we were blown away by her relatability, her sense of humor and just how unafraid she is to speak her mind,” said Seth Markman, senior coordinating producer for ESPN’s NFL studio shows, said in a statement. “Annie brings a very unique perspective as the mother of a current NFL player and as a fan, and we look forward to exploring a variety of different story ideas with her on Sunday NFL Countdown.”

That family and mother angle might be pretty interesting to see explored a bit this season. We all know every one of these players has or had a mom in their life. Will we be seeing ESPN have Annie Apple take us behind the scenes of being a professional football player’s mom or parent? That has some potential, but it is also something that may get pretty tired for the casual fan in a hurry unless a unique angle can be spun on a regular basis.

Apple has already made multiple appearances on ESPN programming, including an in-studio appearance on His & Hers and she has been given the opportunity to write a journal at the NFL Draft for Sports Illustrated (which led to NFL commissioner Roger Goodell sending her brownies after complaining about the lack of desserts at the draft in Chicago).

So this is an interesting hire that cashes in on the heat of the moment, flavor of the day personality. Maybe Annie Apple has some staying power, and if that ends up being the case, that would be fantastic. Let’s just hope this isn’t a short-lived idea from ESPN to try and seize one moment that had its time in the sun and try to bang it to death in the long run.