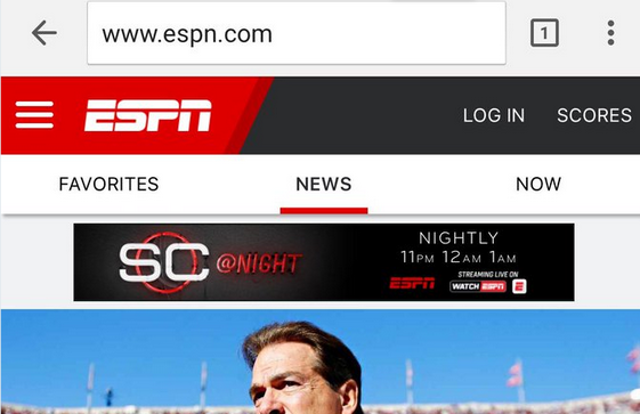 One of the biggest anachronisms of the modern sports internet fell this week, with ESPN finally moving its domain to ESPN.com from ESPN.go.com after 18 years. (Go.com is a Disney-owned portal all of its sites used to be under, but it’s one that’s just a link list at the moment.) ESPN CTO Aaron LaBerge tweeted about the change early Wednesday morning:

There’s since been plenty of discussion about the change, including a Nieman Journalism Lab piece that initially suggested (based on one search-engine optimization analyst’s theory) it was thanks to another SEO analyst’s tweet last week that “30x redirects don’t lose page rank anymore” (301 redirects send traffic from one URL to another, such as ESPN.go.com to ESPN.com; they were suspected to lower Google search rank, but Google has said those penalties were removed some time ago). ESPN spokesperson Paul Melvin told Awful Announcing this move has been in the works for over a year, though, and that SEO wasn’t the only consideration:

That Nieman story is not really accurate in re: to the reasoning.

We relaunched ESPN.com last year, and have built a global digital platform for our sites and signature app.  (We have rolled out multiple editions of them on in various markets — 10 in total so far…including UK, India, Australia, Mexico, Argentina.)

One thing that happened as a part of that was that we implemented a new user registration system last year (which tied in with the increased levels of personalization that we have been undertaking).  It meant that particular aspect of the site (registration) was no longer connected into the Go domain anymore.  So, as we looked to continue to update and clean up the code base of our sites (as part of that continued iteration following the relaunch) we could make this change.

It is true that SEO (generally) is certainly a consideration in the overall operations of our sites (We’ve been applying and evolving best practices for SEO for a long time, and were aware of 301s for years). But that wasn’t the reason for this.

Also worth noting:  If I am not mistaken, the tweet it references to form the basis of that suggestion in the article is from last week.  This is a project that has been underway for much longer than that (if you factor in what a project like this entails — updating 15+ years of references in code, URLs, etc you can see that it is a bigger project than it might seem to the outside observer).

So, no, ESPN didn’t make this decision in a week based on one analyst’s tweet. (Nieman has since updated their piece to reflect ESPN’s comments.) ESPN also wasn’t ignoring all the criticism they’ve taken over the years for having the Go.com extension; it’s a question of when it made sense for them to flip the switch, and the relaunch/localization/registration change last year appears to have provided the necessary spark. This should definitely make things a little easier for ESPN in terms of promoting their web content (they’ve always marketed ESPN.com, not ESPN.go.com, but users will no longer get redirected after typing in ESPN.com), and, as ESPN EVP for digital and print John Kosner noted, The Onion can’t mock them for this any more:

That Onion piece, from August 2013, is pretty hilarious, though, and it illustrates the issues with ESPN.go.com:

In a merger of the two online sports news giants, top executives at ESPN.com announced Thursday that they have fully acquired and subsumed rival website ESPN.go.com. “The audience of ESPN.com and the audience of ESPN.go.com overlapped so much that this move made the most sense,” said ESPN.com vice president Kevin Jackson, explaining that fans will no longer have to check both websites for complete sports news coverage. “Obviously, getting the traffic that was going to ESPN.go.com is huge for us. But there’s also just a lot of mutual respect and admiration between our staff and the ESPN.go.com staff. We’re very excited to start working together.” With the blockbuster acquisition complete, ESPN.com will reportedly now set its sights on picking up one or both of www.espn.com and http://espn.com.

So, no more ESPN.go.com criticisms. The switch makes a lot of sense, and it’s logical that it took a lot of effort. This also seems to have gone very smoothly as domain switches for massive websites go; by comparison, AOL’s change of FanHouse from fanhouse.aol.com to fanhouse.com was cited by many as one of the big problems that arose with that site. That adds to the sense that ESPN’s been working on this for a long time, as there’s a ton of changes that have to happen to make a domain switch like this work. Now, ESPN.go.com can join cnnsi.com, sportsillustrated.cnn.com and fanhouse.com, among many others, in the dumpster bin of old internet sports URLs. (However, ABC.go.com is still ABC’s main site. Get it together, guys!)